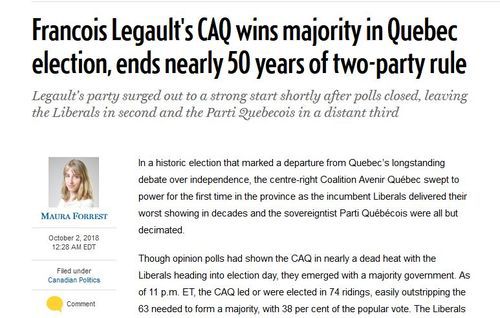 Crushing Victory For Rightists In Québec; Immigration Was The Key

Earlier: The “Great Replacement” Comes For The QUEBECOIS DE SOUCHE (And Anglos Too)

The political establishment in Canada is stunned after the center-right Coalition Avenir Québec won power outright in a crushing victory. It is especially surprising as polls showed them in a dead heat and the Main Stream Media had stepped up the propoganda against them in the days before the election.

In a historic election that marked a departure from Quebec’s longstanding debate over independence, the centre-right Coalition Avenir Québec swept to power for the first time in the province as the incumbent Liberals delivered their worst showing in decades and the sovereigntist Parti Québécois were all but decimated.

Though opinion polls had shown the CAQ in nearly a dead heat with the Liberals heading into election day, they emerged with a majority government. As of 11 p.m. ET, the CAQ led or were elected in 74 ridings, easily outstripping the 63 needed to form a majority, with 38 per cent of the popular vote. The Liberals were leading or elected in 32 seats with 25 per cent of the vote, down from the 68 they held in the province’s national assembly under outgoing premier Philippe Couillard.

However, it's a mistake to think that the National Question no longer matters in the French-speaking "nation within a nation." It's just that it has taken a new form. Instead of the left-nationalism of the PQ, the CAQ took a fairly strong stance against mass immigration and in defense of French culture. Journalists are furious and are demanding more cheap labor, but the voters seemed to like a restrictionist program.

During the Quebec election campaign, anti-immigrant sentiment butted up against an acute labour shortage, with two of the four major parties vowing to cut immigration despite employers saying they need more than 100,000 skilled workers, amid record-low rates of unemployment.

Legault vowed to slash immigration and deport immigrants who did not learn French within three years of arriving in the province.

No other issue, described by Legault’s opponents as “scaremongering” as much gripped the province’s 8.4 million residents...