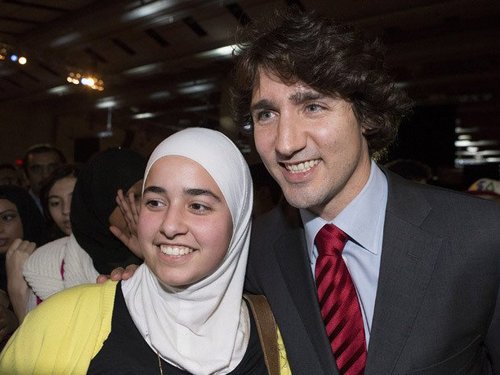 The votes are in, and Canada has decided to party like it’s 1969. The Liberals are once again our Natural Governing Party; the Conservatives are largely reduced to their historic redoubt of Greater Alberta; and a man called Trudeau is again Prime Minister.

But, contrary to what you’ve read in the U.S, Main Stream Media, Prime Minister Stephen Harper is not leaving because

Note that what the New York Times’ Austen called Trudeau’s “sweeping victory” came with just 39.5% of the popular vote. But to be fair, Harper’s Conservatives also won the preceding 2011 election with just 39.6% of the popular vote. The unmentionable reality: in its quiet way, Canada is profoundly divided by sectional and ethnic conflicts, which its infrequent (by American standards) first-past-the-post system of parliamentary elections effectively papers over.

Canada’s Global News headlined October 22: “Ridings with most immigrants voted Liberal by a landslide.” The story’s graphic revealed that of the 29 ridings with an immigrant population of 50% or more (based on the 2011 census): 24 elected Liberals, 3 Conservatives and 2 NDP. Four years ago, these same ridings went 16 Conservative, 7 Liberal and 6 NDP. 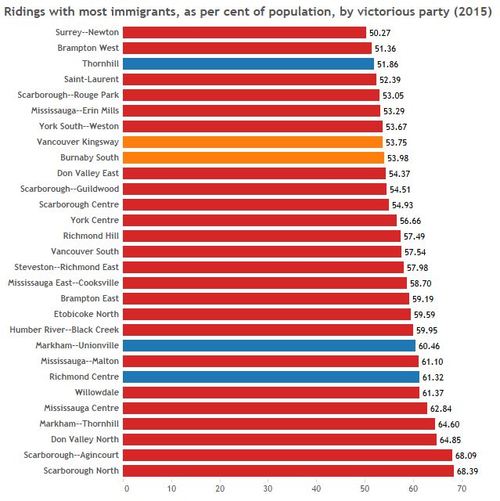 At first glance, this might tend to support the thesis that the Conservatives lost because their campaign was insufficiently sensitive to immigrant sensibilities, as the New Republic gleefully proclaimed. [Canada's Conservative Party Is a Cautionary Tale for the Republican Party, October 16, 2015] (And the triumphalist immigrants have already made their demand known: More immigrants, faster.)

In 2011, however, whites were still 76.7% of Canada’s population. Canada’s immigrants (for the last 50 years overwhelmingly non-white or “visible minority” a.k.a. vizmin in CanSpeak) are overwhelmingly concentrated in urban areas. Thus the vizmin ridings won by the Conservatives in 2011 were in 2015 much more vizmin both in absolute numbers (due to immigration of 250,000 annually) and in culture.

The much-touted Conservative vizmin “breakthrough” in 2011 was deceptive, due primarily to the collapse of the Liberal vote to a historic low of 18.9%. (The New Democratic Party replaced it as Canada’s Official Opposition). This allowed the Conservatives to win some close three-way races in the cities and suburbs.

Much more significantly, Harper’s 2006, 2008 and 2011 victories proved it was possible for the Conservatives to win Canada without sweeping the French-speaking province of Quebec. This was exactly the point that VDARE.com editor Peter Brimelow made in his 1986 book on Canadian politics, The Patriot Game (which also correctly predicted that the then-dominant Progressive Conservatives would be replaced by a Western-based Anglo insurgent party—although this has turned out to be a sort of reverse takeover, see below).

The non-necessity of Quebec implied that the Liberal Party, which has dominated and depended upon Quebec since 1867, was living on borrowed time. It further suggested a dawning Golden Age for Canadian conservatives.

But unfortunately for Harper, the Liberals did not run a dud leader this time. Worse still, the Elections Canada demographic data demonstrates that, short of a radical change in immigration policy and/or galvanizing the white (= Canadian) electorate, it is the Conservatives that are living on borrowed time. [Have Canada's changing demographics made it time to retire the concept of ‘visible minority’?, By Douglas Quan, National Post, June 27, 2014] As it turns out, the Liberals no longer need to sweep Quebec to win (they won a bare majority 40 of 78 seats in 2015, many of them vizmin in Montreal). They can make up the numbers by winning those ridings that have passed the immigrant tipping point (ITP).

The writing was on the wall for the Conservatives in 2011, but there are none so blind as those who will not see. According to Ipsos Reid exit polling, visible minorities that year voted 38% NDP, 31% Conservative, 23% Liberal and 8% other parties. So even after their “breakthrough,” the Conservatives could expect that new vizmin voters would vote against them by a margin of more than 2 to 1.

In response, the Conservative brains trust—Harper and his vizmin capo, Minister of Defence and Multiculturalism Jason “Call Me Bwana” Kenney—decided, in the time-honored way of the innumerate, that they would lose on every sale but make it up on volume.

Stephen Harper came to office almost a decade ago with the goal of making Canada more conservative and dispelling the notion of the Liberals as the natural governing party.

The second assertion is true; the first is nonsense. Harper is in no wise a conservative. His minimal symbolic neopatriotism (which his biographer Paul Wells attributes, maddeningly, to me) was nothing more than cynical semiotics. He is a citoyen du monde, a dogmatic libertarian, an impassioned exponent of invade the world, invite the world. He is the Canadian Paul Ryan.

And like Ryan, Harper toes the neoconservative line. His government claimed that any military attack on Israel was an attack on Canada.[ A threat to Israel is a threat to Canada’: Peter MacKay to Jewish commander, by Murray Brewster, The Canadian Press, June 19, 2012] It even announced that Canada would brook “no tolerance” of expressions in support of the BDS movement. During the election, one Conservative candidate, Mark Adler, claimed (falsely) on his signs to be the only-ever MP to be the offspring of Holocaust survivors. Another, Joyce Bateman, read an “enemies of Israel” blacklist at an all-candidates forum hosted by B’nai Brith. [Tories' extreme stand a bid for Jewish vote, By: Dan Lett, Winnipeg Free Press, October 3, 2015] Shortly before the campaign began, Kenney boasted in a tweet that 50 sailors on HMCS Fredericton, then engaged in impressing Vladimir Putin with the might of our puny navy, “spent 17 hrs on a bus during shore leave to visit #Auschwitz NAZI death camp.” Of course, these hapless sailors were almost certainly bullied into making this exhausting and depressing trip.

Typically, it does not seem to have occurred to Harper and Kenney that while “old-stock Canadians” are generally well-disposed toward Jews, the same cannot be said of our vizmins.

Jews constitute only about 1.5% of Canada’s population (where’s Ann Coulter when you need her, eh?), while Canada’s Muslims, now 3%, are championed by Trudeau. (Poor David Frum, erstwhile Canadian and conjuror of the “axis of evil,” was so upset by Trudeau’s defence of the niqab (Muslim female face covering) that he compared Trudeau to no less than Jeff Davis and Robert E. Lee. [Trudeau didn’t just defend the niqab. He defended the niqab by trivializing the Holocaust, National Post, March 16, 2015] What is it with Canadian expats and the South, anyway?

Aaron Goldstein of the American Spectator noted that the crowd at Trudeau’s victory rally in Montreal chanted “Niqab! Niqab!” and predicted, “Those Liberals who chanted ‘Niqab’ following this election might be chanting ‘Shariah’ after the next one.”

Too true—but whose fault is that?

It would be tedious for me to write (and more so for Americans to read) an account of the various Muslim disputes that dominated the election. [Robyn Urback: The Conservatives bet big on the veil, and lost, National Post, October 21, 2015]Suffice to say that clever-clogs Harper, who believed he could triangulate between immigrants (good) and their often “barbaric practices” (bad) was beaten at every turn. That’s the problem with triangulation; you so often fall between stools.

The process whereby Canada would become rife with barbarians and their practices (female genital mutilation, honor killings and rapes, et al.) began in 1967, when the Liberal government of rumored KGB asset Lester Pearson effected the equivalent of America’s 1965 Hart-Celler Act. In 1968, the year Justin Trudeau’s father Pierre became prime minister, Canada’s population was only 2% vizmin and thus about 95% white (native Indians are not counted as vizmins). It was still a fundamentally conservative country. By 1984, the year Pierre retired, Canada was officially a Leftist “proposition nation,” and opposition to the Liberals’ ongoing revolution was seen as un-Canadian, even treasonous.

Harper’s ambition, like that of Progressive Conservative Prime Minister Brian Mulroney (1984-1993) before him, turned out to be merely to co-opt this Trudeauvian state. It was the Mulroney Conservatives who raised immigration from 85,000 in 1984 to ~250,000 by the turn of the decade and ever after.

Election Day 2015 took place almost exactly one year to the day after two Sudden Islamic Jihad Syndrome Attacks in Canada. Warrant Officer Patrice Vincent was killed by Martin Couture-Rouleau, a Muslim convert in Quebec, while Corporal Nathan Cirillo was killed by Michael Zehaf-Bibeau, a Muslim “revert” who shot up Parliament and forced Prime Minister Harper to hide in a closet.

This was a perfect opportunity for Harper to announce that 45 years of mass non-traditional immigration was enough.

He did not take it.

Indeed, to Harper and Kenney, “New Canadians” are apparently so much better than Old Canadians. The Harper Conservatives’ primary TV spot, which ran thousands of times in several slightly different versions for six months before Election Day and surely did much to suppress turnout by the Conservative base: “Just Not Ready.” Trudeau was mocked for his good looks—and the kill shot was delivered by an elderly Sikh man with an almost impenetrable accent: “Nice hair, though.”

Who will succeed Harper as Conservative leader? Kenney, a kind of Canadian Jack Kemp, is the obvious suggestion, but he is even more single-minded and saturnine than Harper. While the outgoing PM did suffer from a robotic aspect, his accomplishment of mating twice with a human female normalized him somewhat. The unmarried and childless Kenney, by comparison, appears to have been not born but rather decanted at a Pew Research Center laboratory.

Kenny's reaction to his party’s loss was revealing: “I think our obvious weakness has been in tone, in the way we’ve often communicated our messages. I think we need a conservatism that is sunnier and more optimistic than we have sometimes conveyed.” [Conservatives openly criticize party’s election performance, by Steven Chase, The Globe and Mail, October 22, 2015]

In other words: Canadian Cuckservatism? You ain’t seen nothin’ yet!

Kevin Michael Grace (email him) lives in Victoria, BC. He blogs at The Ambler and is the co-host of 2Kevins With Grace & Steel, a weekly podcast.