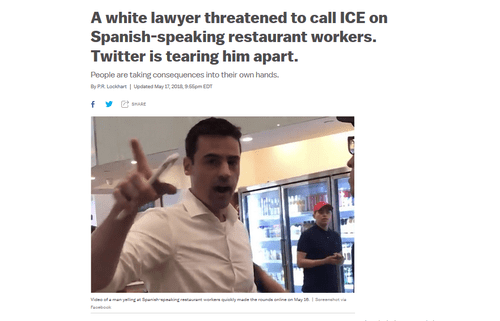 In Quebec, Aaron Schlossberg Would Be a Hero And The Restaurant Fined—Because Quebec Wants To Survive As A Nation

Below is the original Facebook Video, with (as of this writing) nearly 7 million views.

First point: unlike the U.S., Canada does not have a First Amendment. So in Quebec, we believed that the U.S. was a place where opinions could be openly expressed even though they were unpopular—which notoriously has for some time no longer been the case in Canada. But with the epidemic of doxxing following the Unite The Right rally in Charlottesville (leading to at least one suicide—see Andrew Dodson: The Sacrificial Lamb of the Alt-Left, by Lucy Brown, Medium.com, May 23, 2018) the illusion is shattered and America is looking more and more like its former foe, the USSR, if not Mao’s China under the Red Guards.

The fact that Schlossberg’s brief rant in which he demanded the workers to speak English before threatening to call law enforcement—yes, ICE is a law enforcement agency—has made the headlines across the country, and made him the target of a turba mob, shows how universal and unchallengeable the Dominant Ideology of Cultural Marxism has become. This time it is not Communism that is invoked to suppress the dissidents, but Political Correctness. Thou shall not question diversity nor its consequences, or thou shall die—at least socially and economically speaking.[ A white lawyer threatened to call ICE on Spanish-speaking restaurant workers. Twitter is tearing him apart. People are taking consequences into their own hands, By P.R. Lockhart, Vox.com, May 17, 2018]

Schlossberg’s subsequent ritual apology, far from being a vindication of good versus evil, simply demonstrates that Stalinist show trials are now conducted in a more insidious way but have not vanished. And, needless to say, the apology has done him no good. [Racist lawyer whines about being harassed at work, by Julia Marsh and Emily Saul, New York Post, May 23, 2018]

Second point: whatever the tone, was Schlossberg right to ask to be served in English?

This, for any Quebecois, is a no-brainer. In 1977, Quebec’s provincial government adopted a tough language law, Bill 101, forcing all the businesses to advertise in French only and the employers to use French at the work place. Furthermore, the law states that “all businesses have to be able to serve the public in French.” In Quebec, Schlossberg would be a hero and the Fresh Kitchen would face prosecution and fines.

To us Quebecois, using our own language on our own soil is a right and newcomers must adapt. It is not the other way around.

It used to be implicitly the same south of the border. For all the talk of of the “melting pot”, it was assumed that immigrants would follow the laws of the U.S. and would speak English. This was the minimum level of assimilation that was required in order make that “melting pot” work—even if only superficially.

Quebec has adopted laws restricting the linguistic rights of minorities in order to protect its own people from eventual assimilation and to make sure that its culture would survive. The examples of the provinces of Ontario and Manitoba, where the European population were once substantially French and where Francophones now represent a tiny fraction of the population, serve as a warning of what can happen if no action is taken to defend one’s language, especially in an era where immigration has become so massive.

So why does Aaron Schlossberg face reprisals in the U.S. (including, incredibly, possible disbarment(Can New York lawyer Aaron Schlossberg be disbarred for his racist rant? by Jessica Levinson, May 21,2018) for asking for something that would be his legal right in Quebec?

One reason: the Quebecois, being a minority within Canada, are acutely conscious that they might eventually disappear and be assimilated. Survival takes precedence over Political Correctness—or liberalism. Survival as a people matters more to the Quebecois than professing love for a fashionable ideology that will eventually kill them.

The Quebecois know that, even if identity is not limited to language, losing French would mean the end of Quebec as a distinct nation—an ethnocultural entity. The Catholic journalist Jules-Paul Tardivel, who was born in the U.S. and later came back to the land of his ancestors to adopt French said it best when he wrote more than a hundred years ago:

Let’s love and respect our French language. Let’s not be scared of speaking in every circumstance. Our French language is our national flag. It is what makes us a distinct nation on this American soil.

And this belief is shared by most of Quebec’s French-speaking population. Several organizations act as watchdogs, ensuring that Bill 101 and its spirit are respected. Organizations like  Impératif Français, the Société Saint-Jean Baptiste and Montréal Français not only promote Bill 101, but they also promote the ideal of Quebec as a unilingual province, as first proposed by Raymond Barbeau in the 1960s.

It is not only these organizations that support the government effort. The (Left-wing) labor unions also endorse it, bringing up the issue of workers’ safety. In the last few years, accidents occurred in the mines of Western Canada because some of the Chinese temporary workers could not understand the security warnings. Thus a multilingual workforce can jeopardize everybody’s safety.

With such a wide consensus backing Bill 101, it is no wonder that not even the Liberal Party of Quebec, allied to Canadian Prime Minister Justin Trudeau’s Federal Liberal Party and an equally dogmatic advocate of diversity and multiculturalism, has not tried to repeal or even temper it—despite that fact that they receive the votes of most of the 20% or so of Quebec’s population who do not speak French in their homes.

The Province of Quebec, with the highest taxation rate in North America, may not be an example to emulate in every field. But when it comes to protecting our language, its policies should be taken seriously.

Other countries should reflect on this subject. With mass immigration, how will culture and language survive? Will America still be English-speaking when the Anglo-Saxons shrink to a minority? Will it even be America?

France itself recently started reflecting on this very subject, with the “Clause Molière” that would mandate French as the language used on public building sites. The objective here is not only cultural, it aims at protecting the workers, assuring their safety and making sure they do not have to compete with foreign workers

The “Clause Moliere” has not yet been adopted nation-wide, but several departments and cities have adopted it, and some more are thinking about joining the movement.

Americans should start thinking about language. Should newcomers be required to speak English, at least at work, or do the apostles of diversity seek to make the Tower of Babel the new American Dream?

If the Aaron Schlossberg controversy can help start this debate, then perhaps his martyrdom will have been worthwhile.

Rémi Tremblay (email him) is the editor of Le Harfang and a contributor to the Council of Euro-Canadians. Heis the author of  Le Canada français, de Jacques Cartier au génocide tranquille.