Whether the establishment likes it or not, and it evidently does not, there is a revolution going on in America.

The old order in this capital city is on the way out, America is crossing a great divide, and there is no going back.

Donald Trump's triumphant march to the nomination in Cleveland, virtually assured by his five-state sweep Tuesday, confirms it, as does his foreign policy address of Wednesday. 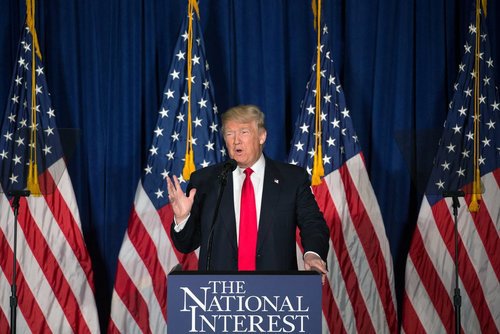 Two minutes into his speech before the Center for the National Interest, Trump declared that the "major and overriding theme" of his administration will be—"America first." Right down the smokestack!

Gutsy and brazen it was to use that phrase, considering the demonization of the great anti-war movement of 1940-41, which was backed by the young patriots John F. Kennedy and his brother Joe, Gerald Ford and Sargent Shriver, and President Hoover and Alice Roosevelt.

Whether the issue is trade, immigration or foreign policy, says Trump, "we are putting the American people first again." U.S. policy will be dictated by U.S. national interests.

By what he castigated, and what he promised, Trump is repudiating both the fruits of the Obama-Clinton foreign policy, and the legacy of Bush Republicanism and neoconservatism.

When Ronald Reagan went home, says Trump, "our foreign policy began to make less and less sense. Logic was replaced with foolishness and arrogance, which ended in one foreign policy disaster after another."

He lists the results of 15 years of Bush-Obama wars in the Middle East: civil war, religious fanaticism, thousands of Americans killed, trillions of dollars lost, a vacuum created that ISIS has filled.

Is he wrong here? How have all of these wars availed us? Where is the "New World Order" of which Bush I rhapsodized at the U.N.?

Can anyone argue that our interventions to overthrow regimes and erect democratic states in Afghanistan, Iraq, Syria, Libya and Yemen have succeeded and been worth the price we have paid in blood and treasure, and the devastation we have left in our wake?

George W. Bush declared that America's goal would become "to end tyranny in our world." An utterly utopian delusion, to which Trump retorts by recalling John Quincy Adams' views on America: "She goes not abroad in search of monsters to destroy."

To the neocons' worldwide crusade for democracy, Trump's retort is that it was always a "dangerous idea" to think "we could make Western democracies out of countries that had no experience or interest in becoming Western democracies."

We are "overextended," he declared, "We must rebuild our military." Our NATO allies have been freeloading for half a century. NAFTA was a lousy deal. In running up $4 trillion in trade surpluses since Bush I, the Chinese have been eating our lunch.

This may be rankest heresy to America's elites, but Trump outlines a foreign policy past generations would have recognized as common sense: Look out for your own country and your own people first.

Instead of calling President Putin names, Trump says he would talk to the Russians to "end the cycle of hostility," if he can.

"Ronald Reagan must be rolling over in his grave," sputtered Sen. Lindsey Graham, who quit the race to avoid a thrashing by the Donald in his home state of South Carolina.

But this writer served in Reagan's White House, and the Gipper was always seeking a way to get the Russians to negotiate. He leapt at the chance for a summit with Mikhail Gorbachev in Geneva and Reykjavik.

"Our goal is peace and prosperity, not war," says Trump, "unlike other candidates, war and aggression will not be my first instinct."

Is that not an old and good Republican tradition?

Dwight Eisenhower ended the war in Korea and kept us out of any other. Richard Nixon ended the war in Vietnam, negotiated arms agreements with Moscow, and made an historic journey to open up Mao's China.

Reagan later believed putting those Marines in Lebanon, where 241 were massacred, to be the worst mistake of his presidency.

Military intervention for reasons of ideology or nation building is not an Eisenhower or Nixon or Reagan tradition. It is not a Republican tradition. It is a Bush II-neocon deformity, an aberration that proved disastrous for the United States and the Middle East.

The New York Times headline declared that Trump's speech was full of "Paradoxes," adding, "Calls to Fortify Military and to Use It Less."

But isn't that what Reagan did? Conduct the greatest military buildup since Ike, then, from a position of strength, negotiate with Moscow a radical reduction in nuclear arms?

"We're getting out of the nation-building business," says Trump.

"The nation-state remains the true foundation for happiness and harmony." No more surrenders of sovereignty on the altars of "globalism."

Is that not a definition of a patriotism that too many among our arrogant elites believe belongs to yesterday?