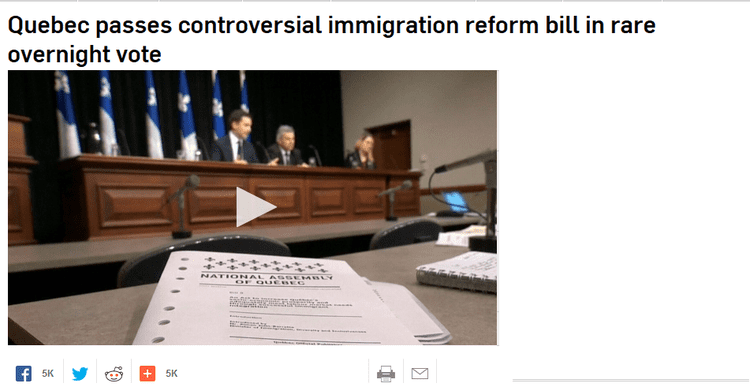 While Toronto celebrates the triumph of Globo-American Lowest Common Denominator culture over Canadian traditions, Quebec is going in a different direction. From CTVNews:

McGill University professor Robert Lekey says there may be backlash to the controversial bill and enforcing it may be difficult.

Immigration advocates are speaking out after the CAQ passed Bill 9, leaving 18,000 hopeful Canadians with denied applications.

The Quebec government has passed a controversial immigration reform bill which will scrap thousands of ongoing applications to live and work in the province. …

Opposition parties said the measure, which scraps immigration applications from 18,000 skilled workers and refunds their fees, forcing them to start over again, is extreme and undemocratic. …

The legislation gives the province more authority over who receives permanent residency, which will involve a “values test” for would-be immigrants.

Liberal MNA Dominique Anglade slammed the CAQ government for forcing the bill through in a rush before politicians take their summer vacation.

“We are trying to attract the best talent in the world,” she said.

“We are a welcoming society and with this we are sending a very wrong message, and they’re underestimating the impact long-term.”

“At 4:08 am this morning, Bill 9, An Act to enhance Québec’s economic prosperity and respond adequately to the needs of the labor market through the successful integration of immigrants, was adopted,” he tweeted. …

Toronto-based immigration lawyer Max Chaudhary told CTV News Channel the government is well within its authority to pass the law.

“The amount of fairness owed to foreign nationals seeking immigration to Quebec is quite limited, and as such this is consistent with an economic focus for Quebec,” he said.

He said the values test could be subject to a challenge under the Charter of Rights and Freedoms but it depends on “how specific and how culturally-driven the criteria is.”

“It is a reality that there are too many people immigrating to the urban centres of Quebec so it does make logical common sense for the government to try to incentivize the candidates to go to rural parts of Quebec, assuming there is an economic need,” he added.

And from Canadian Press:

… The bill prohibits public servants in positions of authority from wearing religious symbols on the job. Its opponents say the law targets religious minorities while the government argues it affirms the Quebecois people’s secular identity. …

Liberal member Marc Tanguay said the changes would result in a “secularism police.”

Just before the final vote, the bill’s sponsor, Simon Jolin-Barrette, minister of immigration, diversity and inclusiveness, asked all legislators to “convey the principles of state secularism with calm and respect.” …

Bill 21 also forbids anyone giving or receiving a state service with their face covered — largely seen as a measure targeting full-face Islamic veils. …

Legault and his ministers have proclaimed that the bill will go down in history alongside other major pieces of legislation affirming the Quebecois nation’s values and way of life, such as the 1977 Charter of the French Language, known as Bill 101.

… The premier said Friday the bill has allowed many Quebecers to regain a sense of pride. But Pierre Arcand, interim Liberal leader, said Sunday Legault’s legacy will be “this botched bill, that can’t be applied, that violates the rights of minorities. Mr. Premier, we will remember you for this.”

Bill 21 was the second law debated and passed over the weekend. In a 62 to 42 vote, the government used its majority around 4 a.m. Sunday to push through Bill 9, which reforms the province’s immigration system….

The bill is controversial because it creates a legal framework that allows the government to force newly arrived immigrants to pass a French-language and so-called values test before becoming eligible for permanent residency.