Earlier, by Rémi Tremblay: In Quebec, Aaron Schlossberg Would Be a Hero And The Restaurant Fined—Because Quebec Wants To Survive As A Nation 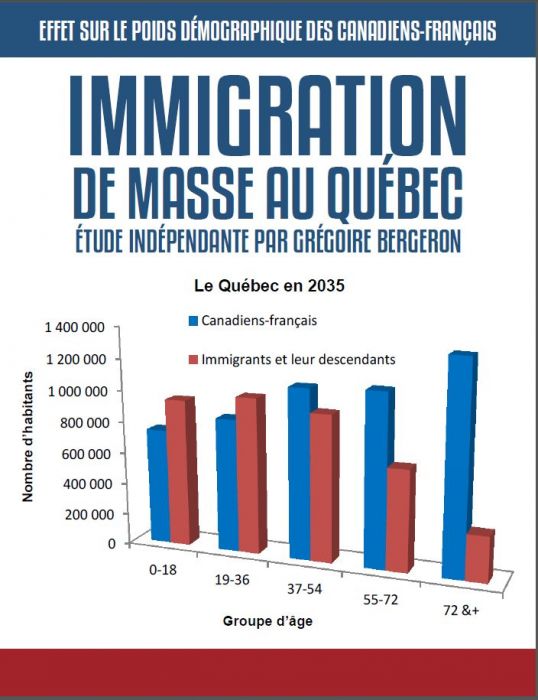 Canada takes even more immigrants relative to its population than the U.S. but its elite has long been as complacently confident that the immigration issue could be kept out of politics as the U.S. elite was before Trump. (Canada has the added advantage of shockingly repressive Hate Speech laws, although U.S. elite and the Tech Totalitarians are working on that). But two recent events have disturbed that complacency: Maxime Bernier, a federal Member of Parliament and prominent former candidate for the federal Conservative Party leadership, began an extremely aggressive Trump-type Twitter campaign denouncing multiculturalism and the diversity cult and has used it to launch a new federal party. And in the run-up to the October 1 Quebec provincial election, François Legault’s Coalition Avenir Québec has cracked Canada’s elite consensus by proposing a (very modest) 20% decrease in immigration. [Quebec election: No place to go for anglophones, by Marian Scott, Montreal Gazette, September 23, 2018] Nor is it surprising that this dissent has begun in the French-speaking province of Quebec: shockingly, current trends suggest that the Québécois de souche (Old Stock Quebecers, the people whose ancestors were the French who settled in Canada before 1760) will soon become a minority in their own homeland.

Everyone who has visited Quebec knows there is something inherently special about it: the home of the French Canadians stands apart in this huge, English-speaking continent. Perhaps the most settled community in North America, the Quebecois resisted all attempts to assimilate them and adopted a defensive nationalism that allowed them to survive despite the hostile environment.

Or maybe not. After two hundred years of continuous struggle which left the Quebecois nation in effective control of their state, the Canadian province of Quebec, the Québécois felt they had won and could embrace modernity and liberalism without any risk. So, after 1960, they let their guard down in the so-called Quiet Revolution.

Old identity markers like religion and tradition were abandoned and the Quebecois did not protest when Canada’s federal government threw the doors of immigration open wide: Quebecois could safely open themselves to the liberal modern world, and everything that went along with it.

They were wrong. What the British Empire dreamt of—replacing the Québécois people—is finally happening, without a whisper of protest and even with the complicity of the pseudo-nationalists from the Parti Québécois who prefer, like the so-called Scottish Nationalists, Leftist Political Correctness to defending their own people.

An independent report presented last year by Grégoire Bergeron [Immigration de masse au Québec : Effet sur le poids démographique des Canadiens-français, 2017 (PDF)] demonstrates that the days of the French Canadians are numbered in Quebec. In less than 20 years, 2035 to be more precise, the Québécois de souche will be a minority on their own soil. After disappearing from the other Canadian provinces mostly due to assimilation into the English-speaking majority, the founders of Canada will simply become one minority among others in one province.

According to Bergeron’s report, the French Canadians—not to be confused with Canadians speaking French—accounted for 79% of Quebec’s population in 1971. With a lower fertility rate, mass immigration and breeding with immigrants, they fell to 64% in 2014 and will become less than 50% in 2035 and they will only account for 35% of the births.

The Great Replacement, a term coined by the French novelist Renaud Camus, is not an abstract concept. It is a reality that simply cannot be denied or tossed away as a far-Right conspiracy theory. It is happening, and it is happening fast.

But the English-speaking Protestants who entered the province after 1760, some of them American Loyalists, must not rejoice; their fate is similar: their number is declining as well in Quebec. French and English share the same fate: a dispossession of their land.

The study also offers several key findings. First, the myth of immigration helping to counter an aging population is debunked once again (there are unfortunately many people who still think of immigration as a remedy to this problem); the author suggests natalist policies. But for me as a Quebecois, incremental policies will unfortunately not do. What is necessary is a real cultural and metapolitical work to place the survival of our people and large families, or at least families, back in the center of mainstream culture.

Another myth debunked by Bergeron: the fashionable revisionist narrative about the origins of the Quebecois--that their ancestors were both French and Natives like the Métis of the West. (The French word Métis—a widely accepted classification, if not officially defined—means “mixed” and is cognate with the Mexican Spanish expression Mestizo.) The results show something else: 95% of Quebecois de Souche’s ancestors come from France, 2% from the British Isles but assimilated into the French-speaking community and 1.35% were Natives. Even today, the rate of unions outside the ethnic group is small. If there were no such unions, the Quebecers would become a minority by 2037 rather than 2035. Non-traditional immigration is what is doing the damage.

With French Canadians becoming a minority, the very idea of Quebec’s independence will become obsolete. Why would the province of Quebec separate if the people inhabiting it are not so different from the rest of the country? Just like in the other provinces, the population will be composed of various minorities. The only differentiating factor will be the language: a majority will still speak French.

Non-traditional immigrants and their descendants have always opposed separatism. We can assume that an independence referendum will never be winnable if Quebecois de souche are a minority.

The Parti Québécois, founded in 1968  to advance the sovereignty of Quebec, might be expected to take heed. But it has chosen to adopt Political Correctness creed rather than defend the first point of its program and embraces mass immigration and wishes a more diverse Quebec. This has created an opportunity for the Coalition Avenir Québec, which is also more centrist party. By refusing to accept its role of defender of the French Canadians, the Parti Québécois is committing a slow suicide, a tendency proven by the recent polls.

Despite the fact that there is still no real political vehicle like France’s Front National, the reaction to this Great Replacement in Quebec is spreading through metapolitical and parapolitical organizations. Over the last few years, many groups critical of mass immigration or Islam have arisen and have joined the Fédération des Québécois de souche which was until recently the only organization openly demanding the end of mass immigration. Groups like La Meute, which mostly focuses on the rise of Islam, are popping up and gaining a wider support, La Meute has more than 40 000 members, an extremely high number for a political organization in Quebec, and held mass demonstrations in Quebec City last year. Other groups, like Storm Alliance, has held protests at the border to denounce illegal immigration, which has become a major issue since Trump’s election. While some groups like Atalante are bringing their message at the street level with demonstrations and different stunts like their #Remigration campaign, others like Horizon Québec Actuel, headed by Alexandre Cormier-Denis, wish to eventually run in elections. In fact, Cormier-Denis tried to defeat the far-left golden boy Gabriel Nadeau-Dubois in a by-election in Montreal. The bid was unsuccessful, but it is the kind of initiatives that will become more and more common in the future.

Conferences, lectures, gatherings and demonstrations have now become frequent and are often attracting hundreds of people, something that was unthinkable only a few years ago. Will this new wave of resistance be enough to reverse the trend?

Hard to say. Yes, the nationalist camp can boast of minor victories, like the referendum in Saint-Apollinaire where a Muslim cemetery project was refused by the inhabitants, but in the long term, it will take bigger victories to ensure we do not become the minority that Grégoire Bergeron has predicted.

Rémi Tremblay (email him) is the editor of Le Harfang and a contributor to the Council of Euro-Canadians. Heis the author of  Le Canada français, de Jacques Cartier au génocide tranquille.