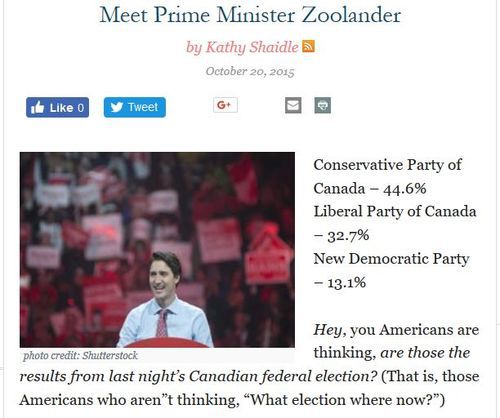 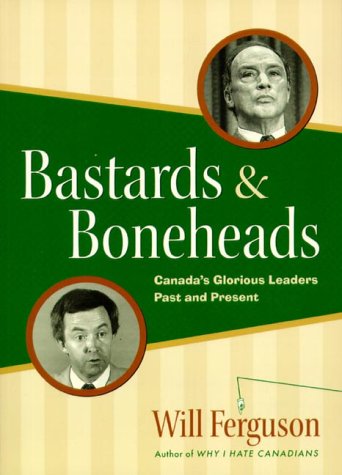 Gavin McInnes's statement on the election was briefer, but heartfelt:

WTF? Justin Trudeau is the Prime Minister of Canada!? He has Down Syndrome. What the f--- have you idiots done!?!?!!?

Canada has had a lot of incompetent Prime Ministers—Canadian writer Will Ferguson  wrote a book in 1999 dividing all Prime Ministers up to that time into Bastards & Boneheads. The cover, right, shows Tory Leader, and for a very brief period, Prime Minister Joe Clark, and Trudeau the Elder. Trudeau was a very clever fellow—no one could call him a bonehead. Clark was—and is—a very nice fellow. But in politics...he was not a success.

Peter Brimelow's 1986 book  The Patriot Game explained one reason why—an Anglo-Canadian who wants a national political career is required to be able to speak French: 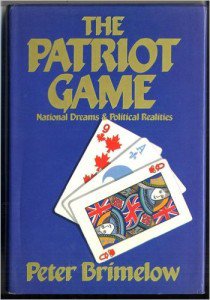 One winter afternoon in late 1975, Joe Clark came to see me in the Toronto offices of the Financial Post. This was even before he became Joe Who. He was running for the leadership of the Progressive Conservative Party, but almost no one had noticed. Earlier that fall Clark had broken a previous appointment with me, pleading insufficient time to consult his economic advisors. Economics is a stigma you have to accept when you write for the Financial Post. Somewhat reluctantly, I began our rescheduled interview by asking him what he thought about the Economic Council of Canada's just-published report Looking Outward, which had recommended continental free trade and had therefore been widely denounced as advocating Canada's absorption into the U.S.A.

Clark immediately fell apart. Frankly, he said, he didn't know anything about economics—still—and his exhausting schedule wasn't helping. You see, he added, "when I went into politics I had to choose between learning economics and learning French. And I chose French. "

Needless to say, I was completely disarmed. Still considering how I could possibly write up the incident without humiliating such a nice and obviously harmless man, I went off to the Middle East to do a Financial Post Special Report on the effects of the oil boom. The report won the Royal Bank/Toronto Press Club Award. Joe Clark won the Tory leadership.

Several morals can be extracted from this tale. One is the subtle, but in my opinion profoundly debilitating, cost of the French connection to English Canadian politics. Another is just how inexperienced Joe Clark was when he became Tory leader at the age of thirty-six.

For a practicing politician to know nothing about what has historically been the central economic question facing his country may be less than surprising, although mildly ironic in Clark's case because of the starring role he has recently been playing [1986] as External Affairs Minister in the Mulroney government's effort to reach a free trade agreement with the U.S. But to be unable to talk his way around such a question is a shocking breach of professional standards. Inexperienced leaders do surface in other countries—witness President Carter—but generally only under unusual circumstances. They turn up in Canada with suspicious frequency.

And as Peter points out, it's a major problem when Canada's leaders have to be chosen from the bilingual minority—it's going to be bad for the US if the only people who can run for President are those who can also speak Spanish.