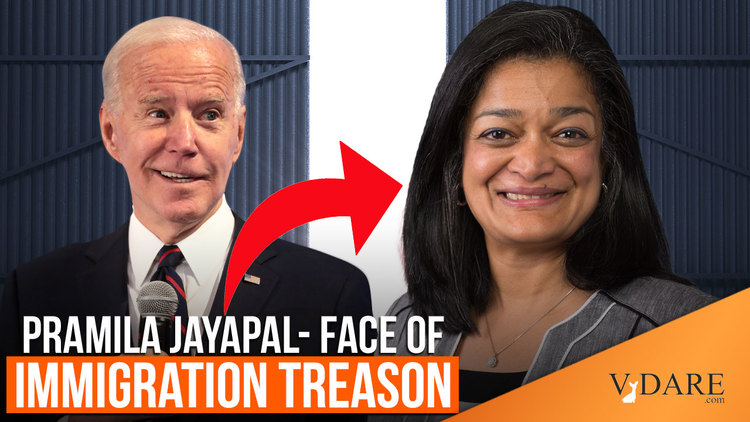 Joe Biden is keeping his pledge to open the border of the United States. He’s overturned many of President Trump’s Executive Orders, and immigration officials are saying they can’t do their jobs. But his party’s Leftist wing, led by Rep. Pramila Jayapal  [Tweet her] an angry anti-American Indian immigrant, is pushing even crazier plans. Some Democrats legislators from purplish states clearly = are getting worried. And then there’s the mounting Biden Rush at the border. All this, and the tough Amnesty fight ahead, is pushing Biden into a corner.

Biden started his presidency on Day One with a blizzard of executive orders and has kept them coming. This is what he’s done:

Biden also ended Trump’s “Remain in Mexico” policy that kept alleged asylum seekers out of the U.S. as they waited for their applications to be decided. That will immediately bring in 25,000 “migrants”—Leftist code for illegals—so they can file what are probably phony asylum applications and stay forever [Biden to slowly allow 25,000 people seeking asylum into US, by Elliot Spagat, Associated Press, February 12, 2021]. And Refugee admissions will be set at 62,500—four times higher than Trump’s 2020 cap [Biden wants to quadruple refugee admissions set by Trump, by Matthew Lee and Julie Watson, Associated Press, February 11, 2021].

Significantly, Leftist activists even pushed Biden into canceling a deportation flight to Africa because it would occur during Black History Month [New Biden rules for ICE point to fewer arrests and deportations, and a more restrained agency, by Nick Miroff and Maria Sacchetti, Washington Post, February 7, 2021]. Now the deportees have more time to plan their permanent stay in the U.S.

At the border itself, Biden has reinstituted “catch and release” [Biden administration’s CBP revives ‘catch and release’ policy at border amid COVID concerns, by William La Jeunesse, Fox News, February 5, 2021]. Federal agents are flooding the heartland with illegals—at least 1,000 since January 20—any number of whom might carry the China Virus [Migrant Families Force Biden to Confront New Border Crisis, by Miriam Jordan and Max Rivlin-Nadler, New York Times, February 6, 2021].

Biden risks triggering an even bigger rush to the border. Again, already this fiscal year, border agents have apprehended nearly twice as many illegals as they had by this time in 2020: 296,259 [Southwest Land Border Encounters, CBP.gov]. And even though he promised to end “kids in cages,” the surge in illegal arrivals forced the administration to open “overflow facilities” for illegal alien minors [Biden administration to open overflow facility for 700 migrant children, by Emily Jacobs, New York Post, February 3, 2021].

Bottom line on the border: “Migrants” are ignoring Biden’s plea not to march north in the hope of asylum. That’s because many heard his Amnesty and asylum promises. That might just convince Biden to do something about it. He knows a crisis would kill his party in the midterms and thwart his agenda.

“Migrants” are not the only or perhaps even worst problem, by the way. As VDARE.com’s Ed Rubenstein reported, the Immigrant Workforce is surging again after 15 months of decline.

Good news is, although Biden still hopes to pass his Amnesty, no Republicans now support it. That could lead to a diluted bill limited to so-called DREAMers. But a limited approach will infuriate the far left.

That brings us back to the Jayapal and the Democrats who want to forget borders altogether: Ocasio-Cortez, of course, along with Veronica Escobar, Judy Chu, Yvette Clark, and Jesús “Chuy” García. They announced the “Roadmap to Freedom Resolution” in late January.

It includes these ideas:

And detention and deportation, she says, are “not the answer” [The Left’s Immigration Plan Under Biden, by Michael Volpe, The American Conservative, February 11, 2021].

Illegals will become citizens, immigration will increase exponentially, border enforcement will end, and foreigner workers will take precedence over Americans. And yeah, detention and deportation are the answer. Just ask the 73 million Americans who voted for Trump.

Biden has to know that bill would kill the Democrats with ordinary Americans. So might his own. A new poll shows that Biden’s immigration actions were the most unpopular of his first executive orders as president. More Americans oppose than support his decision to increase refugees. Fewer than 50 percent of those polled support ending the travel ban and the “Remain in Mexico” policy, or including illegals in the census [Biden’s Move to Expand Refugee Admissions Is His Most Unpopular Executive Action So Far, by Cameron Easley, Morning Consult, February 10, 2021].

Better yet, when the caravans begin again, those policies will be even more unpopular.

Not that Jayapal cares. She represents Seattle, Washington, Ground Zero for nutty, Birkenstock Leftism in the Pacific Northwest. She will pay no price for helping The Great Replacement. Recall that the Chenai-born radical, who didn’t love her own country enough to return after graduating from Northwestern University, helped illegals file what were probably bogus asylum claims.

I was able to successfully assist 5 asylum seekers - 2 unaccompanied minors, a mother and her 9 year old child, and a young man with a serious medical condition - into the United States.

And she thinks that the country’s real problem is whites who don’t want immigrants like her. Don’t forget the time she flipped her lid on Chris Hayes’s MSNBC talk show and said President Trump wanted to ethnically cleanse the country of all nonwhites.

That’s what Biden faces. Yet he knows that some Democrats want to do more than tell “migrants” not to stay home.

Earlier this month, eight Senate Democrats voted against Covid stimulus for illegals, including West Virginia’s Joe Manchin and Montana’s Jon Tester. That suggests the eight might not support a broad Amnesty bill or any other extreme measures like Jayapal’s. Of course, Professional Hispanics and Treason Lobbyists denounced the eight as bigots [Dems split as progressives rage over immigration vote, by Burgess Everett and Marianne Levine, Politico, February 8, 2021].

That aside, if Biden goes too far, he might force senators like Mark Kelly of Arizona, who faces re-election in 2022, to oppose him. Immigration might even push Manchin to the GOP to salvage his future in a very Red West Virginia. Mountain Staters gave Trump 68.7 percent of their votes.

Biden can side with Manchin, Tester, & Co. and dial back his plans to revolutionize immigration policy, or he can continue with his plan, or worse, listen to Jayapal and her pals. Either of the latter could destroy his party in the midterms.

Significantly, of the seven congresswomen supposedly helping Biden push his immigration agenda through the House, two (Judy Chu and Yvette Clark) signed on to Jayapal’s proposal [Meet the 7 congresswomen who are steering Biden's immigration agenda in the House, Rebecca Morin, USA Today, January 29, 2021]. They might persuade Biden to adopt some of their ideas, such as providing free healthcare to illegals.

Any such measure would be a gift to Republicans and a finger in the eye to Manchin-like moderates. Of course, there are now very few Democrats immigration moderates. But Republicans only need less than a few— just one actually—to defeat any crazy immigration plans if all 50 GOP senators stay strong.

Two of those Democrats might even be found in Michigan. Sens. Gary Peters and Debbie Stabenow, who are not particularly moderate, are among the eight Democrats who voted against WuFlu goodies for illegals. Presumably, they are impressed by Trump’s performances in Michigan. In nearly ten years in Washington D.C., I’ve never before seen Democrats defect on an immigration issue like this.

With the impeachment charade over, Congress apparently intends to address Amnesty, at a time of high unemployment and while rush to the border worsens. This won’t be easy for Biden given what he faces from party radicals and, perhaps more importantly, the moderates.

Republicans can defend the Historic American Nation and turn this into a decisive defeat for the Treason Lobby.

But the GOP Establishment ignored the issue in the recent disastrous Georgia Senate races. Have they learned anything?