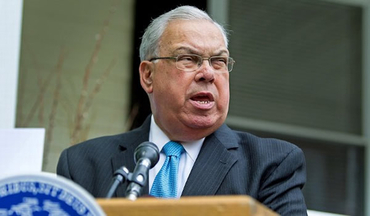 Mark Steyn takes notice of the death of Boston Mayor Thomas Menino, who is being eulogized as a New Deal populist. Maybe, but the populace he appealed to is the "New People" the Democrats are electing.

Steyn points to Menino's willingness to pander to radical Islam, while attacking Chick-Fil-A.

Mayor Tom Menino announced that Chick-fil-A would not be opening in his burg anytime soon. "If they need licenses in the city, it will be very difficult," said His Honor. If you've just wandered in in the middle of the column, this guy Menino isn't the mayor of Soviet Novosibirsk or Kampong Cham under the Khmer Rouge, but of Boston, Massachusetts. Nevertheless, he shares the commissars' view that in order to operate even a modest and politically inconsequential business it is necessary to demonstrate that one is in full ideological compliance with party orthodoxy. "There is no place for discrimination on Boston's Freedom Trail," Mayor Menino thundered in his letter to Mr. Cathy, "and no place for your company alongside it." ... As the Boston Herald's Michael Graham pointed out, Menino is happy to hand out municipal licenses to groups whose most prominent figures call for gays to be put to death. The mayor couldn't have been more accommodating (including giving them $1.8 million of municipal land) of the new mosque of the Islamic Society of Boston, whose IRS returns listed as one of their seven trustees Yusuf al-Qaradawi. Like President Obama, Imam Qaradawi's position on gays is in a state of "evolution": He can't decide whether to burn them or toss 'em off a cliff. "Some say we should throw them from a high place," he told Al Jazeera. "Some say we should burn them, and so on. There is disagreement. . . . The important thing is to treat this act as a crime."

What I remember is Menino's protest against a Federal program of deporting felons, which led him to pull the city of Boston (population 650,000, most of them Americans) out of Secure Communities:

“But what I found out was through our research that people for your stolen cars, simple crimes, their fingerprints were sent down to Washington and being deported also...I couldn’t take that."

If a guy who thinks like that is a populist, it's not the American people he's thinking of.