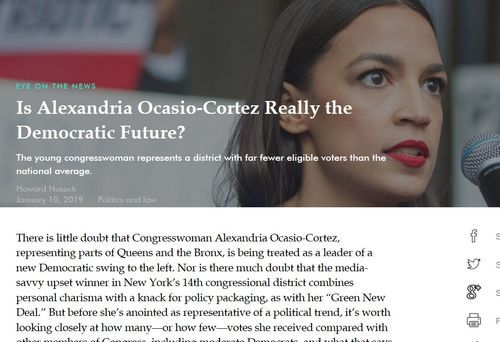 But there are a couple of significant immigration-related facets of the Ocasio-Cortez and Omar stories that Allan didn't cover.

First, regarding Ocasio-Cortez, there's the matter of "rotten boroughs," which has been a repeated theme at VDARE.com; indeed, editor James Fulford was writing about them as far back as February 2001.  These are electoral districts wherein there are relatively few eligible voters because the district populations are dominated by non-citizens, including Lawful Permanent Residents, those here on visitor visas, and illegal aliens.  (District lines are set by taking into account total populations, not populations of eligible voters or even citizens.)

Ocasio-Cortez is the new representative for a very rotten borough, as briefly laid out by Howard Husock at City Journal (Is Alexandria Ocasio-Cortez Really the Democratic Future?, January 10, 2019; interestingly, the article's URL is https://www.city-journal.org/role-of-non-citizen-immigrants-on-congressional-districts).  He writes:

In Ocasio-Cortez’s district, Census data show that 47 percent of residents are foreign-born—compared with 13 percent for the nation overall. That helps explain how the self-styled democratic socialist won her key primary election with so few votes: just 16,898, out of a total of just 29,000 cast. Immigrants are less likely to be citizens—just 44 percent have been naturalized, according to most recent Census data—and Hispanic immigrants are the least likely of all: 75 percent of immigrants from Vietnam have become citizens, for example, compared with just 23 percent of immigrants from Mexico. In [her] congressional district, 56 percent of residents are Latino.

Those representing less immigrant-heavy districts face a more difficult electoral challenge—that is, they must persuade more voters. Consider Republican minority leader Kevin McCarthy’s 23rd congressional district in California, representing Bakersfield and the southern San Joaquin Valley. Just 13 percent of the 745,000 residents there are foreign-born; in that district’s primary, 118,000 voters went to the polls, and McCarthy received 81,000 votes. Compare those figures with Ocasio-Cortez’s above.

Then there's Omar, just elected to Minnesota's 5th congressional district.  Her prior experience in public office had started with election as a Minnesota state representative in November 2016.  She came to the U.S., along with her family of origin, in 1995, as a "refugee" (I use the quotation marks advisedly) from Somalia.  The family had been living in a refugee camp in Kenya for several years.

Astoundingly—except that this is far from unique in our fraud-dominated refugee program—Omar paid a triumphal visit back to Somalia (local girl makes good!) soon after her election to the Minnesota House of Representatives.  As reported in Africa Times on December 20, 2016:

The Somali American left as a child and lived for years in the Dadaab refugee camp in Kenya before moving to the United States in 1997. She is the first Somali-American woman to become a lawmaker in the U.S., where she will serve as a Minnesota state representative.

[Mohamud welcomes Somali-American Ilhan Omar to Mogadishu, by AT editor; link in original]

(257 more Somali "refugees" arrived during FY 2018, and there have been 10 arrivals during October through December of the current fiscal year.  To access such numbers for "refugee" arrivals from all over, go to this web page http://www.wrapsnet.org/admissions-and-arrivals/, scroll to the bottom where it says "Admissions Reports," and click on the first link under that.  Doing so will download an Excel workbook to your machine.  Then note the tabs at the bottom for spreadsheets covering individual fiscal years going back to 2001.)

I vividly remember this tidbit from Omar's history because of how the normally unflappable Ann Corcoran covered it back then in her Refugee Resettlement Watch blog: What the hell! Somali American goes HOME for visit to Somalia!   As Ann wrote:

It has got to stop! There is no reason that we are admitting thousands of Somalis to the US every month when their country is safe enough for newly elected Minnesota legislator, Ilhan Omar, to go HOME for a visit!

I am so angry.

In my nearly ten years of writing RRW, I don’t think I have been so angry as I am at this moment.

But ... la dee da.  What's new?  It fits: Every aspect of our immigration chaos amounts to the victimization of us native-born citizens.