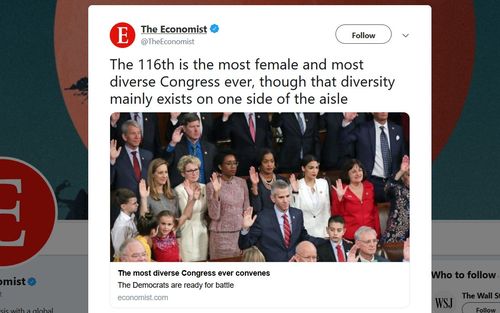 See also: The Democratic Party Has Tipped—Great News For The GOP (Which Doesn’t Deserve It) By Peter Brimelow

With President Trump fighting valiantly for a border wall, as last week's speech from the Oval Office well showed, it’s worth taking a look at just what he is up against in the 116th Congress. The Lamestream Media tell us it’s a Congress of “firsts”—by which it means “diversity” and the increased number of Leftist women. As VDARE.com Editor Peter Brimelow has noted, the Democratic Party “tipped” in the 2016 Presidential election, with only a minority of its vote coming from white heterosexual American Christians. That revolution has now reached the Democrat House caucus, which in 2019 is 41% non-white (and 11% Jewish). Thanks to immigration, the parties in effect represent different nations.

Here are some numbers:

The 116th Congress makes history with the number of women and African-American and Hispanic members sworn into office. … A record 127 women will serve in Congress, with 106 Democrats and 21 Republicans — roughly 24 percent of all the seats. ... Twenty-five women will serve in the Senate, with 17 Democrats and eight Republicans. Democrats will take back control of the House, led by Democratic leader Nancy Pelosi of California, who reclaimed the speaker of the House seat and remains the first and only female House speaker.

[These are the women making history as the 116th Congress is sworn in, by Emma Newburger, CNBC, January 3, 2019]

Nothing here suggests this Congress full of “firsts” will better govern the country than the comparatively first-free 115th Congress. CNBC just assumes No. 116 is superior because of its “record” number of women and minorities.

Let’s list a few of the “firsts” who will help House Speaker Nancy Pelosi continue her mission to destroy the Historic American Nation: 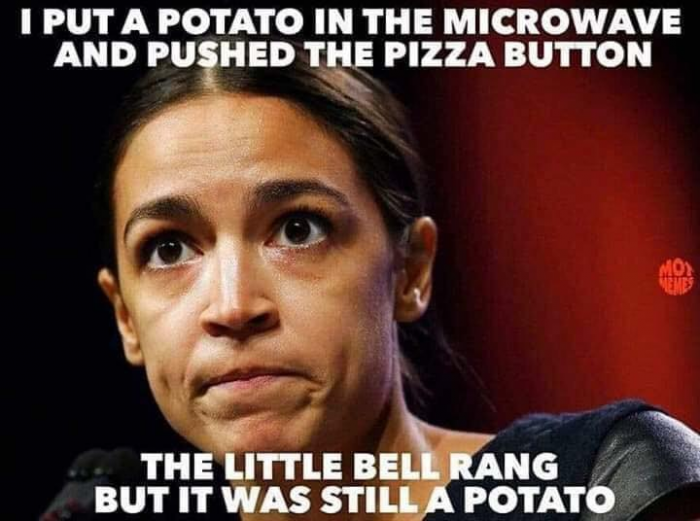 Rep. Omar has a couple other firsts to her name as well. She’s the first congresswoman who had to deny she married her brother to perpetrate immigration fraud. She’s also the first to wear a hijab. As usual when diversity collides with standards, the House changed a 181-year-old rule that banned hats and other headgear to accommodate Sharia. [Consequences for not wearing hijab, by Hanafi Fiqh, Islam QA.org]Fellow Muslima Tlaib  took her oath on the Quran and wore a thobe, a traditional Arab dress “stitched by her mother.” And of course the Arab militant hit the ground running by declaring of President Trump, “we’re going to impeach the motherf***er”.

Yet the Hispanics are probably more worrisome than the Mohammedans—at least for now. The 116th Congress has more Hispanics than any previous Congress, and they’re worrisome not because they’re Hispanic, but instead because most are Leftist enemies of the Historic American Nation. Thus the Spanish-language news agency EFE said of Ocasio-Cortez:

The young legislator also forms part of the record number of 43 Latino members of Congress who will served beginning today in both chambers, including 35 Democrats and 8 Republicans, who will represent the 57 million Hispanic inhabitants of the country. [emphasis added]

And you were under impression that congresswomen who “happen to be Latino” should represent the constituents in their districts? Here’s another interesting fact, courtesy of Univision, the Hispanic propaganda network:

Hispanics have been winning more and more seats in the House of Representatives, arriving at the historic level of 38 legislators. Their number and influence began to increase in the 80s, with the growth of the Latino population and thanks to electoral reforms and judicial decisions seeking to protect minorities.

Traditionally, Latino representatives were only winning in districts in which there was a Hispanic majority. Nevertheless … this tendency has changed: in the last 5 congresses they have begun to win white majority districts where Hispanics are less than 10% [of the population]. In the Congress [to be] inaugurated in 2019, in 20% of the districts with Latino representatives there are more whites than Hispanics.

But 20 percent is still not actually changing the general rule of majority Hispanic districts. Let’s see what Univision is getting at.One such district, New York 14, which elected Ocasio-Cortez, is 49 percent Hispanic (and only 18% white). So Ocasio-Cortez was hardly elected by a solid non-Hispanic white majority.And three Hispanics who won in majority non-Hispanic districts are very white Republicans who look about as "Hispanic" as Marlon Brando, who played Emiliano Zapata.They are:

For Univision, none of these Republican Hispanics in the 116th Congress look too promising. In fact, Univision probably doesn’t consider them real Hispanics given their party affiliation and voting records.That said, the GOP should be concerned about this from the Univision report: “Of the 38 Hispanics, 10 were added this year to the House of Representatives. Five of them are Democrats who won in districts that were in the hands of Republicans.”Those Hispanics will boost the size of the Leftist Hispanic caucus:

The Congressional Hispanic Caucus (CHC) will grow to 39 members … marking the largest group of Hispanic Democrats in congressional history. Nine new CHC members will be sworn in as lawmakers for the 116th Congress, which will include the highest representation of Hispanics from both parties on Capitol Hill. Republicans left the Democratic-heavy CHC in 2003 to form their own Hispanic caucus.

The CHC chairman is hard-Left Rep. Joaquin Castro, Texas 20, who rates a career F from Numbers USA. “It’s clear the Democratic Congress is becoming more and more representative of our nation and the growing Latino American community,” he told The Hill’s Bernal. Still, complained Bernal, “Hispanic representation in Washington still is not proportional to the demographic’s share of the U.S. population.”And what does the CHC have planned?

According to caudillo Castro (no relation to Fidel or Raúl, apparently):

"Our caucus looks forward to working with House and Senate leadership to achieve equal opportunities for all Americans, while holding this Administration accountable for its abhorrent immigration policies."

The Donald has a tough two years ahead, particularly in forging a new immigration policy, but neither he, nor we, should give up. He can do plenty with his executive powers. Like, for example, build a wall. [National Emergency Powers and Trump’s Border Wall, Explained, by Charlie Savage, The New York Times, January 7, 2019]

It will take some nerve, and the determination not to be intimidated by the MSM, House Democrats, and Republicans like Mitt Romney. But America’s future is at stake.