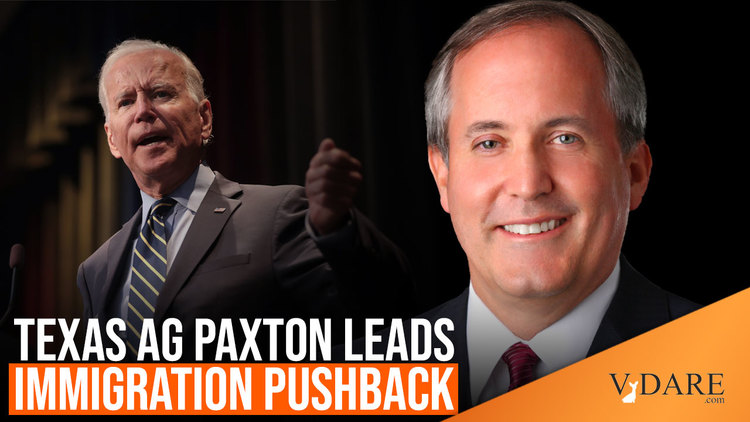 Previously: Immigration Issue Set To Flare Up In 2021

President Joe Biden is keeping his promise to aid and abet The Great Replacement. On his first day in office, he signed 17 executive orders, most aimed at wrecking Trump’s immigration legacy. He effectively froze immigration enforcement, and unveiled his radical Amnesty plan to the applause of the Treason Lobby and Professional Hispanics. And he shows no signs of letting up. Or at the least the puppet masters pulling his strings don’t. What will the GOP do? So far, perhaps surprisingly, the signs of resistance are good.

More recently, Biden released a new executive order to review Trump's policies on legal immigration, particularly the Public Charge rule that barred immigrants who rely on government assistance from green cards. A “review” rather than outright abolition indicates he can't outright scrap it, leaving the door open to legal challenges if he tries [Biden to sign executive orders on immigration, including family reunification, by Dartunorro Clark and Julia Ainsley, NBC News, February 2, 2021].

And soon, Biden says, he will order a dramatic increase in the annual “refugee” quota, though it is unclear if it will reach the 125,000 figure he promised during his campaign. He has also promised to sign orders to liberalize asylum policies and “reunite” illegal immigrant “families” [Biden delays orders to reverse Trump-era immigration changes, create task force for separated families, by Camilo Montoya-Galvez and Ed O’Keefe, CBS News, January 28, 2021].

Worse still is the massive Amnesty bill. It would give a “pathway to citizenship” to all illegals, increase refugee resettlement, increase guest workers, eliminate the word “alien” from government documents (!), and shower more foreign aid on Central America. Its only concession to Republicans: it meekly says it will increase more technology at the border.

Good news is, Republicans are opposing this madness. Here’s what they’ve done so far:

Texas Attorney General Ken Paxton took aim at the deportation moratorium. He filed suit in federal court to argue that it would burden state services and directly lead “to the immediate release of additional illegal aliens in Texas.” Immigration experts warned that many of the illegals are hardened criminals who would be free to prey on the public [Texas Sues to Stop Biden’s Deportation Halt, by Stephen Dinan, Washington Times, January 22, 2021].

While not a huge victory, this does signal two positive developments. It shows Republican attorney generals can fight Biden’s executive actions, just as Democrat AGs did throughout Trump’s presidency. Republicans, Biden is learning, can run to judges, too. Other possible policies against which GOP state AGs might file lawsuits include wall construction, the permanency of Temporary Protected Status for foreigners, and any Amnesties Biden might try by executive fiat.

The case also demonstrates the utility of Trump-appointed judges. They could prove to be one of his enduring achievements—if they can stymie Biden’s radicalism.

Not a single Congressional Republican expressed any enthusiasm for Biden’s Amnesty. Indeed, the two remaining drafters of the Gang of Eight Amnesty, Sens. Marco Rubio of Florida and Lindsey Graham of South Carolina, won’t back it. Only five of the 13 remaining supporters of the 2013 Amnesty remain in the Senate:

“I don't think I can even count to one,” said a senior GOP aide who wasn't authorized to speak about the plan's prospects, arguing that the path to citizenship is “an issue” for Republicans.

Amnesty had better be “an issue” for Republicans, given that it is a demographic death sentence for the party. Still, this marks a dramatic change from 2013. Back then, Republicans notably Rubio and Graham, argued that the party must support Amnesty in order to win over Hispanics. It appears they’ve changed their tune, likely because Trump received historic levels of Hispanic support with an America First agenda. So it appears that Republicans have lost their appetite for what Rubio and Graham crafted seven years ago.

As well, Rubio knows supporting Amnesty will doom any chance of victory in another run for the presidency.

The only way this bill can pass: Democrats eliminate the filibuster. But that proposal is not well-received by the party’s few remaining moderates. If the GOP maintains its collective opposition toward Amnesty, this bill is dead.

Of course, that doesn’t mean Republicans won’t support another form of Amnesty, albeit a smaller one.

Shortly after the election, I predicted that the chances were low for a comprehensive Amnesty. However, I also warned that a limited Amnesty for “DREAMers”—illegal aliens brought to the U.S. as minors—could well pass.

Graham and Democrat Dick Durbin are set to introduce such an Amnesty this week. The bill’s details are unspecified, but it’s expected to offer permanent legal status and eventually citizenship to nearly 2 million illegals.

Durbin hopes the bill will be the base for further concessions on immigration. He says at least a half-dozen Republicans are interested [Durbin, Graham Teaming Up on Immigration Bill, by Jordain Carney, The Hill, January 28, 2021].

Graham sees it as a “starting point” to reach a compromise on the larger immigration bill. However, he doesn’t see a DREAMer measure passing with enough Republican support to overcome a filibuster.

Here’s what Republicans must remember: this bill might prove to be the real fight if Democrats figure that the larger Amnesty is doomed. They might fear inviting the wrath of their far-Left base if they concede too much to Republicans. The far-Left doesn’t want additional border security or enforcement measures to dupe moderate Republicans into backing Amnesty. They claim those “compromises” are racist. Thus, Democrats might adopt the piecemeal approach that allows GOP squishes to sell out the country without the Amnesty label.

But then again, other aspects of Biden’s immigration policy are a de facto Amnesty anyway. No deportations and lax enforcement will provide the means for illegals to exploit the system to gain legal status. Democrats might think it’s smarter to keep the issue alive than to work with Republicans to deliver a bill their base hates.

The task for Republicans is simple: They must resist every one of Biden’s immigration initiatives. No immigration bill should be passed, every executive order must be challenged in court, and every relevant cabinet nominee must be grilled about immigration.

The party missed an opportunity to derail the nomination of Homeland Security secretary Alexander Mayorkas, despite his very left-wing record on immigration. They can’t make that mistake again [Biden's DHS pick Mayorkas advances out of committee, heads to Senate floor for confirmation vote, by Adam Shaw, Fox News, January 26, 2021].

However positive a sign the GOP opposition to Amnesty is, the party can’t rest on that. They must resist the effort to dispossess the Historic American Nation as much as the Left resisted Trump. There must be no compromises and no deals.

Any Republican sell-out should know that a Trump-backed primary challenger awaits.

That might be the only thing that forces Stupid Party cucks to wise up.