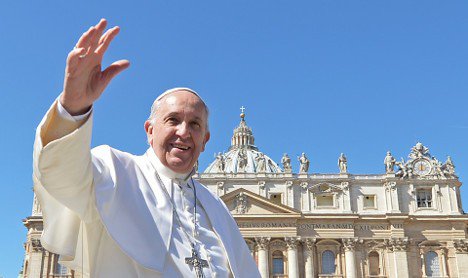 Pope Francis, “Migrants,” and Christendom: His Preaching is not the Church’s Teaching

In his Christmas Eve homily, Pope Francis said: “May God repay all those, both individuals and states, who generously work to provide assistance and welcome to the numerous migrants and refugees, helping them to build a dignified future for themselves and for their dear ones, and to be integrated in the societies which receive them” [Pope Francis’s Christmas message: full text, Catholic Herald, December 25, 2015. VDARE.com emphases added throughout this article]. Actually, the U.S. taxpayer already gets to “repay” the povertycrats at Catholic Charities, a particularly notorious (and intolerant) Treason Lobby refugee racket. But more importantly, as a Catholic I can’t help but notice that Pope Francis’s simplistic moral posturing is not consistent with the traditional teaching of the Church.

And as a Westerner, I know if what was once called Christendom does as he asks, it will mean the end of our nations and culture.

The Holy Father’s crippling naiveté has been on display since the beginning of his Papacy. In 2013, in an address to the “Pontifical Council for the Pastoral Care of Migrants and Itinerant People” (which sounds like something out of the Comintern), he said:

I would like to ask all of you to see a ray of hope … in the eyes and hearts of refugees... A hope that is expressed in expectations for the future, in the desire for friendship, in the wish to participate in the host society also through learning the language, access to employment and the education of children. I admire the courage of those who hope gradually to resume a normal life, waiting for joy and love to return to brighten their existence. We can and must all nourish this hope!

[Address of Holy Father Francis to Participants in Plenary of the Pontifical Council for the Pastoral Care of Migrants and Itinerant People, The Vatican, May 24, 2013. Emphasis added]

Compare this “hope” to the Hegira into Europe today. Most migrants are healthy, iPhone-equipped men of military age. The overwhelming majority are Muslim and half are not Syrian. And compare the Pope’s gushing over those who “wish to participate in the host society” to those Latin American “migrants” to the U.S. who expect and demand to be catered to in Spanish.

Soon afterward, the Pope visited the Italian island of Lampedusa, which has been overwhelmed by flotillas of African invaders. There, the Pope demanded Europe accept them all without preconditions.

In 2014, Pope Francis went further: “We believe that Jesus was a refugee, had to flee to save his life, with Saint Joseph and Mary, had to leave for Egypt. He was a refugee” [Pope Francis: ‘Jesus Was a Refugee,” by Yasmine Hafiz, Huffington Post, June 23, 2014] The Pope urged Catholics to “let us be their neighbors, share their fears and uncertainty about the future, and take concrete steps to reduce their suffering.”

American Bishops are just as extreme as the Bishop of Rome. In 2003, the American and Mexican bishops issued a joint statement entitled “Strangers No Longer,” chiefly concerned with the “right to migrate” of Mexicans, and their “right” to a job and a certain standard of living once they arrive [United States Conference of Bishops and Conferencia del Episcopado Mexicano, January 22, 2003].

And after September 11, the bishops have only intensified their “outreach” to Muslims. While they are noticeably shy about confronting Leftists on cultural issues, these Great Society liberals in clerical collars are eager to attack immigration patriots. Following Donald Trump’s comments about the people that Mexico offloads into our country, Timothy Cardinal Dolan, Archbishop of New York, denounced Trump as a dangerous “nativist” [With Apologies to Donald Trump for the Crazy ‘Nativist’ Rant of Cardinal Dolan, by Father Marcel Guarnizo, Breitbart.com, July 30, 2015]

Worst of all, even after the Muslim attacks in Paris for which the Syrian-based Islamic State claimed credit, the chairman of the USCCB’s Committee on Migration, Bishop Eusebio Elizondo of Seattle had the gall to announce he was “disturbed by calls from both federal and state officials for an end to the resettlement of Syrian refugees in the United States” [Bishops’ Migration Chair: U.S. Should Welcome Syrian Refugees, Work for Peace, United States Conference of Catholic Bishops, November 17, 2015]

Are suffering Syrians really the Mexican-born Elizondo’s worry? Or does he fear anything that might get Americans thinking about his brother Mexicans flooding into the United States?

It’s important to remember this is an outgrowth of the liberalized Church that emerged from the Second Vatican Council. Since then, most prelates, including every Pope since John XXIII, support free migration in principle. This knee-jerk preference of the alien over the native (in Western nations, anyway) is rationalized by cherry-picked Bible quotes such as Exodus 22:21: “You shall not wrong a sojourner or oppress him, for you were sojourners in the land of Egypt.”

Impeccable humanitarian guidance from our Lord, but consider it in its place and time. Ancient Israel is not America or Europe today. The Israelites had been sojourners in Egypt. Eventually, they went home; they were better for it, as are we.

Who is the “sojourner”? Anyone passing through another’s land—whether or not he means to stay. Is not Exodus 22:21 simply a prefiguration of the Golden Rule? Exodus 22:21 says nothing about when, whom, and how many “sojourners” any nation must welcome and provide for, simply that we should treat everyone humanely.

The Old Testament also contains a great deal about the importance of borders (especially in Numbers) and warnings against allowing aliens’ practices to corrupt Israel’s worship. The history of Israel recounted in the Books of Samuel, Kings, and Chronicles offers painful lessons about the disasters that await a nation that abandons its traditions.

In the New Testament, Open-Borders enthusiasts cite St. Luke’s story of the Good Samaritan (Luke 10:25-37). But, again, this has nothing to do with immigration. At the time of Christ, Samaritans were as native to Palestine as the Jews themselves. The story is just another call to follow the Golden Rule, given greater force as the moral exemplar is from a nation most of the story’s original hearers would have disdained.

Note also that the Samaritan, whom Christ commends highly, did not take the injured man into his own home: he paid for the victim’s stay at an inn—until he recovered. This is the direct equivalent of funding refugee camps near disaster areas.

In St. Matthew’s Gospel, Jesus warns us that we will be judged by how we treated “the least of these my brothers” (Matt. 25:31-46). Once more, we are merely commanded to treat all men humanely on pain of judgment. Contrary to Open-Borders enthusiasts, this is not a command to prefer the alien to our own.

The Golden Rule is truly universal; it’s not an Affirmative Action program for legal or illegal aliens.

Catholics traditionally esteem St. Thomas Aquinas as our foremost theologian. St. Thomas addressed the right order of charity in his Summa Theologica. His conclusion is practical and humane: “In matters concerning relations between citizens, we should prefer our fellow-citizens.” If we cannot find it in ourselves to treat our national kinsmen well, it’s hard to see how we’ll sincerely treat anyone well.

The default position of today’s Catholic hierarchy (emphatically not shared by most American Catholics) is that borders are either meaningless or an insult to those kept from crossing them. But is that what the Church’s Catechism, the definitive interpretation of Catholic dogma, says? No.

Catechism of the Catholic Church, #2241:

The more prosperous nations are obliged, to the extent they are able, to welcome the foreigner in search of the security and the means of livelihood which he cannot find in his country of origin. Public authorities should see to it that the natural right is respected that places a guest under the protection of those who receive him.

Political authorities, for the sake of the common good for which they are responsible, may make the right to immigrate subject to various juridical conditions, especially with regard to the immigrants’ duties toward their country of adoption. Immigrants are obliged to respect with gratitude the material and spiritual heritage of the country that receives them, to obey its laws and assist in carrying civic burdens. (Emphases added).

This is from the current, 1994 edition. Clearly, Catholic teaching imposes no duty of Open Borders. The Catechism’s language about political authorities’ acting “for the sake of the common good for which they are responsible” means their first duty is to their own nations and citizens, in keeping with St. Thomas’s teaching.

Immigrants owe duties to countries generous enough to receive them. The Catechism acknowledges limits on any right to immigrate. Even when dealing with the most desperate refugees, prosperous nations are only obliged to welcome them “to the extent they are able,” a prudential judgment for those nations’ political leaders. And Papacy has never claimed Infallibility in such matters.

What should that prudential judgment be? There is suffering in Syria, and real refugees. Most, today, are housed in nations bordering Syria such as Jordan and Turkey. That is as it should be: refugees should go no farther from home than necessary. The presumption is they should return home when conditions improve.

The wealthy Arab states of the Persian Gulf should do their part; that Western governments—and the Pope—won’t condemn their inaction is inexcusable.

In a powerful essay posted on his website, the Catholic author Dr. Taylor Marshall looking at the new Hegira from a Thomist point of view He asks whether Catholics’ response should be to follow the model of the Good Samaritan or that of the Maccabees, who fought to preserve Jewish life and practice when threatened by Hellenistic rulers.

Marshall chooses the Maccabean response: the state has a duty to defend the nation and its traditions, with violence if need be, when faced by grave threats. This duty to their own is incumbent on all legitimate rulers and precedes any duty to others [Islamic Refugee Crisis: Good Samaritan or Maccabean Response? Or both? November 2015]

Western assistance to Middle Eastern refugees in the Middle East may well be warranted. But accepting mass immigration of majority-Muslim Middle Easterners to the West is not. For the Pope and Catholic bishops to endorse it is civilizational treason.

Christianity is not an Open Borders creed. The Catholic Church has no Open Borders doctrine. Catholicism teaches that Christians must respect all men and treat all humanely—a very different doctrine from Islam’s view of the infidel. But, as St. Thomas says, Catholicism also teaches that charity begins at home.