Yes, Virginia (Dare), We Are Getting Less Intelligent. And The “Flynn Effect” Won’t Help

Recently, VDARE.com’s Lance Welton cited my work when suggesting that a general decline in intelligence—among whites, quite apart from the immigration of lower IQ races—was one reason for the disgraceful jury verdict in the Derek Chauvin show trial. People often react incredulously when told of this IQ decline: “Haven’t you heard of the Flynn Effect? The Flynn Effect shows that IQ scores are rising and that we are becoming more intelligent!” Those who say things like this—such as Angela Saini in her book Superior: The Return of Race Science—simply have no idea what the Flynn Effect actually is. So I will now explain.

Intelligence is the ability to solve cognitive problems. The quicker you can solve a set problem, or the harder it has to be before you’re stumped, the cleverer you are.

The “Flynn Effect” was the term coined by Richard Herrnstein and Charles Murray in their 1994 book The Bell Curve for the sustained increase in intelligence test scores that took place during most of the 20th century—until the 1990s, as it turned out. They named it after James Flynn (1934-2020), who had done much of the work establishing this phenomenon. It is vital to note that Flynn never argued that increasing test scores were proof that average intelligence itself was rising.

My interpretation of Flynn’s account of intelligence in his last major book on intelligence, 2012 book Are We Getting Smarter? Rising IQ in the Twenty-First Century (2012), is that it should be understood a bit like a pyramid.  At the bottom there are numerous “specialized abilities” that are very weakly associated with how smart you are: general pattern spotting, tying your shoelaces, manipulating tools or catching a ball. These all correlate with three core kinds of intelligence that are further up the pyramid: verbal, mathematical and spatial. These, in turn, inter-correlate (people who score high on one who score high on the others), meaning we can conceive of “general intelligence”—known as g—at the apex of the pyramid.

Intelligence is like height, not only in that it is “normally distributed” on a “bell curve”—most people score the average and fewer and fewer people are found as you move away from the average in either direction—but also in that it is influenced by both genetics and environment.

Thus how long your body is happens to be mainly genetic. The length of your trunk is highly genetic. This means no matter how poor your nutrition, it'll be very similar in length to your parents' trunks. But the length of your legs is weakly genetic. This means their length can vary substantially from your parents' leg-length based on environmental factors, such as childhood access to nutrition. This is why we are taller than the average Victorian—our legs have gotten longer.

These traits have a “phenotypic limit.” Some people, with the best possible environment, will reach 6 foot in height, but their genetics means they can never exceed that no matter how optimal the environment.

The same is true of intelligence. It can be pushed to its “phenotypic limit” by an intellectually-stimulating environment.

Intelligence, as Flynn noted may be up to about 0.8 heritable. But this varies. The g-factor is very strongly genetic. The “specialized abilities” at the base of the pyramid are much a matter of environment.

Since at least the 1930s, when different age cohorts have been tested, there has been an average IQ score rise of about 2.8 points per decade. Flynn argued that this could not be a matter of general intelligence, or we would be geniuses compared to the late Victorians.

It turns out that the rise is driven by massive increases on certain specialized abilities, specifically those related to “Similarities”—the ability to spot patterns.

Pattern-spotting is partly innate, but it is also significantly a matter of environment. What appears to have happened, argued Flynn, is that, across the Twentieth Century as society has become more focused on science, people have been taught to think in a more analytical way. As Flynn put it, they have been forced to don “scientific spectacles.” This has pushed “Similarities” to its phenotypic maximum extremely quickly—so that, whatever is happening with other components of intelligence, the (imperfect) IQ tests report it as an IQ rise.

Now, if average intelligence were actually falling—and this were masked on the IQ tests by the Flynn Effect artefact—then eventually, we would reach our phenotypic limit for these specialized abilities. And then the underlying decline in intelligence would be noticed even on IQ tests.

And this is exactly what has happened. This so-called “Negative Flynn Effect” has been observed since about 1997 in Western countries and there is some evidence that it is actually affecting g, on the most genetically influenced IQ sub-tests. This has been termed, by my co-author Michael Woodley of Menie, research fellow with the Center Leo Apostel at Vrije Universiteit Brussel, the “Co-Occurrence Model”: intelligence is falling, driven by genetic changes, but it is (misleadingly) rising on the IQ test. due to environmental changes 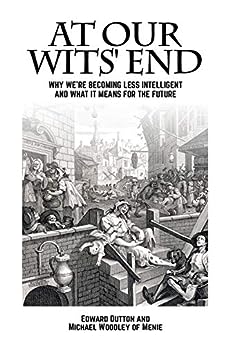 Thus, the IQ test is a poor instrument for measuring intelligence across time, due to the way in which cultural changes interfere with it. If we look at more objective measures, however, the evidence that intelligence is falling, specifically for genetic reasons, is overwhelming, as Woodley set out, using robust correlates of intelligence, in our 2018 book At Our Wits’ End: Why We’re Becoming Less Intelligent and What It Means for the Future.

For example, our reaction times got longer between 1880 and 2000, consistent with a 15-point IQ drop. Reaction times correlate with IQ because a huge component of intelligence is processing speed. We are also getting worse at color discrimination—an aspect of intelligence being the ability to take in more subtle information and so better solve a problem. Words are “thinking tools” and we are declining in our use of complex vocabulary. We are becoming less good at remembering lists of numbers; this being a marker of intelligence.

Our levels of per capita major innovations—having reached a peak in 1870—have declined back to where they were in 1600. (In At Our Wits End, we cited “A possible declining trend for worldwide innovation,” By Jonathan Huebner, Journal of Technological Forecasting, 2005.  Key innovations cone from genius,  which is a combination of outlier high IQ and moderately low altruism, empathy and impulse control. But there are simply fewer geniuses around. (And it cannot be argued that we’ve picked all the “low hanging fruit” because ideas are only “low hanging” if you are intelligent. For low IQ groups, the wheel is “high hanging fruit”).

Most importantly, across three generations, and controlling for immigration, there has been a decline in the percentage of populations carrying alleles that are associated with very high levels of education, and thus with high IQ.

And these are only some of indicators that intelligence has been in decline for over a century.

Why is this happening? Contraception plays a big part. Less intelligent people are more impulsive and are inefficient users of contraception, so they have large families by accident. Also, feminism means that intelligent women focus on their education and careers in their twenties and even thirties, becoming mothers—if they do at all, the most intelligent often do not breed—when their less intelligent peers, who anyway have more children, are becoming grandmothers.

Welfare allows low IQ people to have lots of children. Indeed, in Britain, only families on welfare have above replacement fertility. And, of course, immigration, from lower IQ countries, will contribute to reducing IQ, at the genetic and possibly also environmental level, as schooling becomes more chaotic and complicated.

So I hope it is now clear that the Flynn Effect, as popularly understood, is an illusion. Flynn was clear about this himself. He was a brave and original scientist, concerned with the truth; one of the dying breed of “honest liberals.” It would be a terrible disservice to him if his discovery was misunderstood, willfully or otherwise.

Modern society is dysgenic We are simply becoming less intelligent on average. And the Flynn Effect does not contradict this finding in any way, as Flynn himself acknowledged [IQ Decline and Piaget, By James Flynn & Michael Shayer, Intelligence, 2018].

The result will be the gradual decline of civilization. Perhaps—with collapsing trust and cooperation, both correlated with intelligence—this is what we are already beginning to see.