Psychologist Dr. James Thompson has moved his blog over to Unz.com, and he has recently posted on an anonymous questionnaire  that  asked  researchers what they thought about IQ, race, and genetics. These are dangerous things for a scientist to even mention in the Current Year—remember what happened to James Watson in 2007.

What IQ researchers really think about race and intelligence https://t.co/8Q6UBsUXIy

The point is that the public narrative is that there is no genetic component to the Test Gap, but if you can get anonymous responses from researchers frequently you get a different answer:

Invitations were emailed to 1237 persons and at the end only 228 (18 %) participants completed the process (70 fully and 158 partially). As far as the authors could make it out, “lefties” and “righties” turned down the offer in equal numbers, complaining that the questions were not good enough, the selection of experts would not be good or that they did not want to participate in a process which suggested that the truth could be found by majority decisions. In fact, the authors just wanted to find out what expert opinion was, in all its variety, and were not intending to come to any conclusions of a majority sort. (Perhaps climate research has poisoned the academic atmosphere, and no-one wants to be involved with anything which smacks of consensus science). As many pointed out, one good study can smash down an old consensus.

Asked: What are the sources of U.S. black-white differences in IQ?

So, we can now write the headlines. For popular newspapers the headline might be: IQ experts split.

For more refined publications it could be: Intelligence experts almost normally distributed.

Another way of putting it is that these differences describe a Bell Curve. Of course, first you have to admit that there is some difference. The picture below depicts the late Arthur Jensen, drawing two Bell Curves on a blackboard. To repeat myself slightly, the one one the right represents a group (call it x) with an average of something (let us say IQ points) of 100. The one one the left represents a group (call it y) with an average of 85. 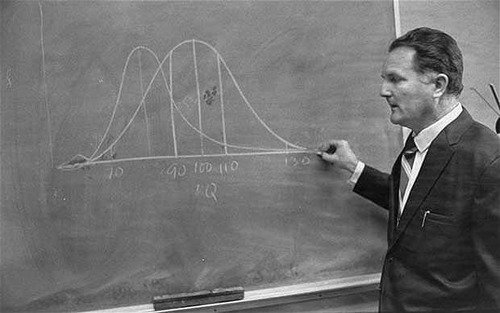