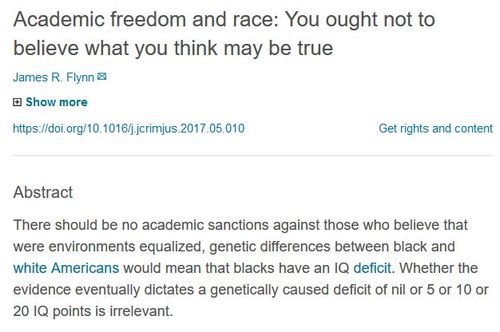 James Flynn, the IQ researcher after whom the Flynn Effect (or Lynn-Flynn Effect)is named, wrote an article recently about academic freedom:

Academic freedom and race: You ought not to believe what you think may be true

There should be no academic sanctions against those who believe that were environments equalized, genetic differences between black and white Americans would mean that blacks have an IQ deficit. Whether the evidence eventually dictates a genetically caused deficit of nil or 5 or 10 or 20 IQ points is irrelevant.

The hypothesis is intelligible and subject to scientific investigation. If that is so, you must have already investigated it if you are to know what is true or false. To prohibit others from investigation or publication of their results is to designate certain truths as the property of an elite to be forbidden to anyone else. It is to insulate them from whatever new evidence the scientific method may provide that would modify belief. A word to those who seek respectability by banning race/gene research: how much respectability would you get if your position were stated without equivocation? What if you were to openly say genetic equality between the races may or may not be true; and that is exactly why I forbid it to be investigated. Or: “I do not know if genetic equality is true and do not want anyone else to know.” [More]

Here's what I've said about that--if you have the unscientific belief that all races have (secretly, in a way that's hidden from test scores) "exactly the same average IQ" then you have to prove it.

There is a thing called the "Standard Social Science Model" which assumes that races do have the same IQ, but it's wrong. It's not a scientific fact, just a "model", like the story of the economist lost on a desert island who said "Assume a can-opener".

Any scientist who doesn't believe this is persecuted, and has been since the 1970s.

In the 25 years I've known him, Jim Flynn has been unwaveringly committed to these principles--and to collegiality and generosity. https://t.co/Ui8sF8VrC8