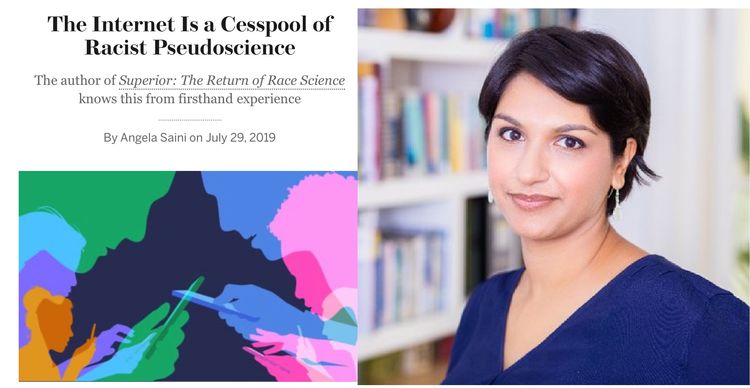 The Internet Is a Cesspool of Racist Pseudoscience

The author of Superior: The Return of Race Science knows this from firsthand experience

Last month, I temporarily deactivated my Twitter account following a colossal dump of racist abuse into my feed, including a man in Texas whipping up his followers to phone into an NPR radio show on which I was a guest to ask about “white genocide.”…

The abuse I’ve seen isn’t unusual. Others receive worse, especially if they are in the public eye. My particular crime was to have written a well-reviewed popular science book about why racial categories are not as biologically meaningful as we think and how, in fact, they have been used to justify slavery and the Holocaust. These are ideas so widely accepted in mainstream academia that it should be blandly uncontroversial to repeat them. Yet to read some of the comments I’ve received, one might imagine I was hopelessly deluded.

In Superior: The Return of Race Science, I interview researchers at the cutting edge of research into human difference to journalistically expose the dangerous history of scientific racism. It is ground that has been trodden by respected scholars in the past, including evolutionary biologist Stephen Jay Gould, historian Evelynn Hammonds and anthropologist Jonathan Marks, as well as journalists such as Amy Harmon at the New York Times. Despite all our efforts, sometimes it feels as though we are no further along.

Hey, Amy Harmon got a 90 year old man cruelly humiliated, so say not the struggle naught availeth, Angela. Who knows, maybe you’ll come up with some dirt on, say, 95-year-old Freeman Dyson or 90-year-old Edward O. Wilson and get them Canceled.

If anything, the public debate around race and science has sunk into the mud. To state even the undeniable fact that we are one human species today means falling afoul of a cabal of conspiracy theorists. The “race realists,” as they call themselves online, join the growing ranks of climate change deniers, anti-vaxxers and flat-earthers in insisting that science is under the yoke of some grand master plan designed to pull the wool over everyone’s eyes. In their case, a left-wing plot to promote racial equality when, as far as they’re concerned, racial equality is impossible for biological reasons.

How did we get here? How did society manage to create so much room for those who genuinely believe that entire nations have innately higher or lower cognitive capacities, who think that mixed-heritage children are genetically impaired, who assume that someone’s skin color can tell you something about their IQ, and who are actively working to resurrect eugenics?

As the media landscape flattens, drawing audiences away from traditional outlets to a plethora of online ones, those with outdated views have found themselves elevated from the lonely shadows into the light. They have moved on from letters in green ink and pulled up a seat alongside reputable writers and academics. The internet has opened the door to racists and sexists, and they have happily walked in. They’re trampling over our carpets with their grubby shoes even as we offer them a drink. They have normalized extremism, pseudoscience and crackpottery.

The blame can be spread widely. Social media corporations, such as Twitter and Facebook, have allowed racist networks to proliferate. …

The racists like to couch this as a freedom of speech issue. They argue they have the right to say what they want, that the world needs more “diversity of opinion.” But do the rest of us have a duty to sit and listen to racist pseudoscience? Is society obliged to give them platforms, however much nonsense they come out with? Doesn’t it have a responsibility to protect those whose humanity and safety is threatened by the minority who seek to deny people equal rights and freedoms based on race or gender?

People once imagined that social media would somehow regulate itself, that only the truth would survive in the marketplace of ideas. If the only racists left in society were uneducated thugs at the fringes of everyday life, what harm could they pose?

But as I was reminded when I researched Superior, racists exist at all levels of society, including in academia, science, media and politics. They have money and power. The abuse dished out by these smart racists is not the fist-throwing kind, but the racism of rhetoric. It is characterized by clever euphemisms (the term “race realist” is a perfect example), carefully manipulated arguments and abusive cherry-picking of data.

The funny thing is that Angela D. Saini isn’t some Masha Gessen-type, she’s a rather proper lady, whose all purpose reaction to being told scientific facts is more or less: “Well, I never!”

She’s like Margaret Dumont in the Marx Brothers movies, with David Reich as Groucho, except today Margaret deserves to get the final word.