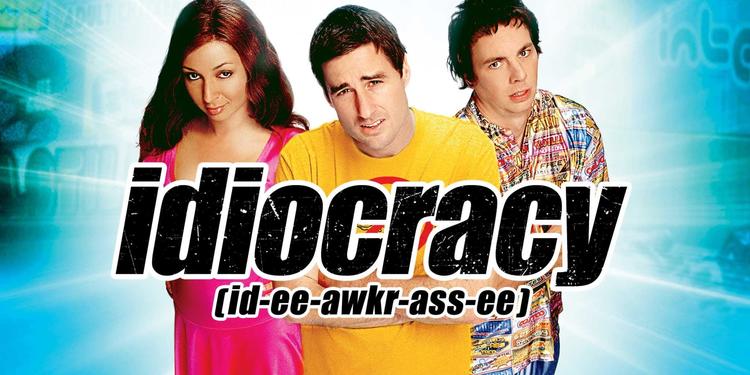 Is America Headed For Idiocracy?

This year's smartest movie about morons wasn't Fox Studio's expertly-promoted Borat, which turned out to be a string of old-fashioned Polish Jokes. (Here's my review in The American Conservative). No, it was Idiocracy, which Fox did everything in its power to prevent the public from seeing.

On Labor Day Weekend, the slackest time of the year for movie-going, the Fox Studios dumped the most interesting American comedy of the year in 130 theatres without any advertising whatsoever. Idiocracy was written and directed by the paleoconservative Mike Judge (whom I profiled in VDARE.COM last spring). Judge is the creator of the highly successful television series King of the Hill, Beavis & and Butt-Head, and the cult classic film Office Space. So Fox killing Judge's Idiocracy made little sense on financial grounds. 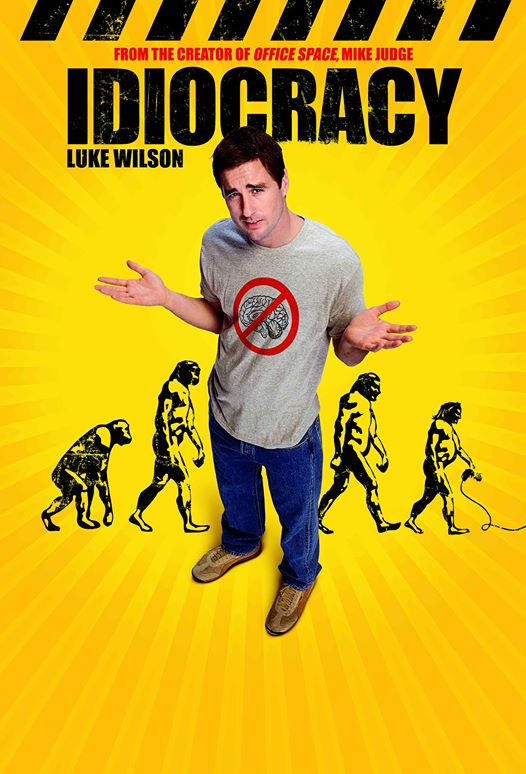 Idiocracy turned out to be Borat for smart people—profanely funny, but with a much more thought-provoking message. (The DVD is being released in the post-Christmas shopping dead zone on January 9.)

Fox presumably decided to exterminate Idiocracy because its premise was explicitly based on the forbidden  dysgenic theory of declining IQ.

In Idiocracy's opening sequence, on the left side of the screen a yuppie married couple with IQs of 138 and 141 dither away their chance to have babies while waiting for the market for homes in good school districts to become more affordable. Meanwhile, on the right half of the screen, a slack-jawed yokel named Clevon is impregnating every woman in the trailer park.

This process goes on for another 500 years. So, when Private Joe Bauers (Luke Wilson), who was selected to be a guinea pig in a human hibernation experiment because he is the most average man in the Army—right in the middle of all the bell curves—wakes up in 2505 AD, his 100 IQ makes him the smartest man in a now completely dysfunctional America, where collapsing skyscrapers are held together with twine.

The professional wrestler who is “President of America” (in sharp contrast to today, when a bodybuilder is Governor of California) makes Joe the Secretary of Agriculture because famine looms. Joe discovers that the crops are dying because they are irrigated with Gatorade (“It has the electrolytes plants crave!” claims an advertising slogan that has been beaten into the shrinking skulls of the public for centuries, making “electrolytes” the only four-syllable word Americans now know). Consequently, he's elected President.

Although Fox apparently chose to sabotage its own movie rather than be accused of political incorrectness, the funny thing is that an awful lot of influential Americans believe its theory that the inferior are outbreeding the superior. Just look at the enormous popularity of University of Chicago economist Steven D. Levitt's bestseller  Freakonomics. The book's most celebrated theory is that legalizing abortion in the 1970s lowered the crime rate in the late 1990s by eradicating fetuses more likely to grow up to be criminals.

This idea turned out, upon closer examination, to be historically implausible (the first cohort born after legalization had a teen murder rate triple that of the last cohort born before legalization). And then two economists found it was all based on a couple of technical errors Levitt had made.

But, what's a little thing like validity? That abortion cut crime is now the conventional wisdom in the media—because that's what many important people already believed when Levitt came along and told them what they wanted to hear.

It's important to realize that for evaluating the likelihood of Idiocracy or Freakonomics, it doesn't particularly matter whether nature or nurture is the driving force in molding the next generation.

If dim people are having more babies than smart people, the average American in the next generation will end up with a relatively worse upbringing or worse genes or both. As I explained to Levitt in Slate in 1999, a long line of both conservative and progressive nail-biters have worried that a bourgeoisie that's self-disciplined and responsible enough to use abstinence or contraception will someday be demographically swamped by a working class too sexually indulgent and disorganized to prevent pregnancies.

The “eugenicists” feared the spread of the lower orders' inadequate genes. The “euculturalists” dreaded their cruder culture. And agnostics on the subject realized that while disentangling nature and nurture was extremely difficult, the precise mechanism mattered surprisingly little.

Fortunately, we now have some solid data on whether there really is a dysgenic and/or dyscultural trend from one of the gold standards of American social science, the National Longitudinal Study of Youth.

In 1979, the Bureau of Labor Statistics established a nationally representative sample of about 13,000 young people born from 1957 to 1964. In 1980, the military paid to have the entire sample take its enlistment IQ test, the Armed Forces Qualification Test. In 1990, the NLSY methodically checked up on how they were doing in life. The military provided the data to Charles Murray and Richard J. Herrnstein and it wound up as the centerpiece in the 1994 bestseller  The Bell Curve.

The NLSY is still going on. It has now even measured the IQs of 6209 children of women in the original panel—2557 of whom were born to black female panelists.

In the American Enterprise Institute debate on November 30 between Charles Murray and James Flynn on ” The Black-White IQ Gap: Is It Closing? Will It Ever Go Away?“, Murray revealed two important findings.

So, there is no dysgenic/dyscultural effect among whites. (Nor is there a eugenic/eucultural effect, either. But at least things aren't getting worse.)

That's not good, but I bet a lot of people would have guessed the black figure would be more like 67 or 75 percent. (Farther up the scale for blacks it gets worse—only 7 percent of the children born to black women in the study had mothers with IQs over 100.)

Unfortunately, we don't know the IQs of the fathers. With the illegitimacy rate now 69.5 percent among blacks, 46.4 percent among Hispanics, and 24.5 percent among whites, we can be confident that, for many of these baby-daddies, genes will be about all they'll contribute to their children.

Let's assume that fathers have the same IQs as mothers (which is reasonable—spousal IQs have been found to be correlated, because of the phenomenon called “assortative mating”) and that children's IQs regress halfway from their parents' scores toward the mean. Then this black imbalance would cause average black IQs to fall about 0.8 points per generation. That's not disastrous, but it's in the wrong direction.

They tend to have babies soon after dropping out of community college. In contrast, smarter women tend to delay motherhood until after grad school, and maybe even until after they make partner or get tenure.

Thus, even if the left half of the bell curve doesn't have more babies than the right half in each generation, their generations occur quicker so they become more dominant over time.

I'm roughly estimating that if the right half off the bell curve has a generation four years longer than the left half that this knocks off from the national average IQ about 0.7 points per generation.

The black “total fertility rate” or expected babies per woman's lifetime has dropped below the replacement rate (it was 2.02 in 2005), but it's still higher than the non-Hispanic white total fertility rate (1.84). While blacks, who average about 15 IQ points below the white mean, were only 18 percent as numerous as the non-Hispanic white population in 2000, the Census Bureau projects that they will climb to 29% as large by 2050.

Even more importantly, Hispanics, who average about 10 IQ points less than whites, have 2.88 babies per woman. That, along with immigration, is why the Census Bureau thinks they will climb from 18 percent of the white total in 2000 to 49 percent in 2050.

Or much higher if President Bush, Speaker Pelosi, and Senators McCain and Kennedy have their way with the immigration laws.

The growth in the Asian population, which averages about 5 points higher than whites, will likely add a little to the national average IQ. But hardly enough to make up for the deterioration caused by other groups' relative growths.

The overall impact on IQ of changes in the racial makeup will be negative but not enormous. On a scale where whites average 100, the U.S. average IQ can be expected to decline from 96.8 in 2000 to 95.3 in 2050 based on Census projections and assuming that IQs remain stable within each group.

That means there are three trends that will lower the national average IQ:

1. The number of black children born to women with IQs below the black mean

Over the course of two generations, these three effects combined would drive down IQ by approaching four points. National average IQ would fall from a little under 97 in 2000 to around 93 by the middle of the century.

Bear in mind that this is not a complete forecast, just a model that simplifies some complicated trends. It no doubt leaves out other important changes, such as the countervailing but poorly understood Flynn Effect of rising raw test scores.

A four point decline by the middle of the century is not catastrophic. So we can rest assured that 2050 won't look precisely like 2505 in Idiocracy.

Yet, a three or four point decline would have broad, noticeable impacts. Call it Idiocracy Lite. As the population gets dumberer, entertainment will become even dopier than it is now. The population is likely to get surlier, less interested in higher culture. And the competence of the workforce will drop.

The irony is that white liberal elitists, who see themselves as better than the rest of America because (A) they loudly proclaim their belief in equality; and (B) they have above average IQs, are particularly likely to find disagreeable the new America that they have helped midwife through their support for open borders.