Ann Coulter: "I Will Not Be Scienced"—Experts Wrong, Covid Could Have Come From Wuhan Lab After All

Recently, the widely respected science writer Nicholas Wade published an article in Medium pushing the idea that—contrary to what “the scientists” assured us—COVID-19 might have come from the Wuhan virology lab, not the wet markets.

According to Wade, the virologists attacking the lab theory were claiming scientific certainty for something unknowable, and at least one of them has a gigantic conflict of interest. Even at a time when “TRUST THE SCIENCE!” has become a liberal mating call, I’m shocked at the deceptions of these guys.

Wade cites two groups as leading the attack on the lab theory.

Kristian G. Andersen,  [Tweet him] a professor of immunology and microbiology at the Scripps Research Institute in California, was the lead author of a paper published in Nature Medicine on March 17, 2020, claiming: “Our analyses clearly show that SARS-CoV-2 is not a laboratory construct or a purposefully manipulated virus.”

Talk about influential—not only did the New York Times cite Andersen, but I did!

Now, a year later, Wade says, “Dr. Andersen and his colleagues were assuring their readers of something they could not know.” While Andersen claimed that two of the virus’s characteristics couldn’t be made in a lab, Wade describes exactly how they could be. 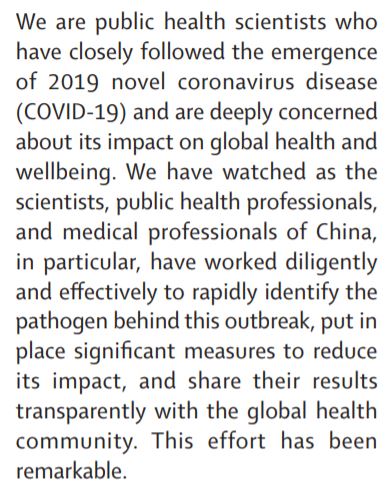 The second group of experts denouncing the lab theory was led by Peter Daszak, [Tweet him] the president of the EcoHealth Alliance of New York. Daszak got two dozen other scientists to sign a letter (right) to The Lancet that portentously declared: “We stand together to strongly condemn conspiracy theories suggesting that COVID-19 does not have a natural origin.” Scientists, the letter said, “overwhelmingly conclude that this coronavirus originated in wildlife.”

Well! No uncertainty there!

But Wade notes that Daszak’s EcoHealth Alliance had helped fund the Wuhan lab.

I have a problem when a guy with a financial and reputational stake in a lab organizes a group of scientists to say, It’s absolutely not from the lab!!! Daszak’s letter concluded with what only the deeply cynical might suggest was a lie: “We declare no competing interests.”

In response to the obvious question, WHY DIDN’T ANY OTHER SCIENTISTS SPEAK UP?, Wade says:

“Perhaps because in today’s universities speech can be very costly. Careers can be destroyed for stepping out of line. Any virologist who challenges the community’s declared view risks having his next grant application turned down by the panel of fellow virologists that advises the government grant distribution agency.”

If we could give them a truth serum, I wonder what these experts would say about transgenders, IQ, the COVID shutdowns and any number of pressing social issues we’re all supposed to shut up about because of “science.”

And of course there was the fact that Trump had floated the lab theory. Before a liberal will answer any question, he needs to know:

1) Has Trump ever offered an opinion on this?
2) What is the 180-degree opposite position?

Wade claims to have no preference for one theory over another—he’s just laying out the facts! But it’s pretty clear that he is coming down on the side of the lab theory.

He doesn’t mention that 27 of the original 41 Chinese people who contracted COVID-19 had been to the Wuhan wet market, known the world over for its delectable porcupine anus and snake innards. Several other carriers were family members of those infected there. By contrast, no one from the Wuhan lab appears to have been infected.

No, Wade’s argument is a purely scientific one. Not my bailiwick. But I can see when experts disagree, and, oh my gosh, do they disagree!

One of Wade’s main points is that COVID-19 is the only coronavirus with a furin cleavage site. (You don’t need to know what it is—substitute the words “chocolate bunny.”) “So,” Wade concludes, “it’s hard to explain how the [COVID] virus picked up its furin cleavage site naturally.”

Last month, the World Health Organization released a major report on the origin of the coronavirus, so I checked to see what its scientists said about this “furin cleavage.” They say COVID-19’s “furin cleavage” is, in fact, like that in another bat coronavirus, RmYN02, “providing evidence that such insertion events occur naturally in animals.”

I can’t evaluate the science, but I can line up words, and those conclusions don’t match. In fact, they are direct opposites.

Like you, I’m inclined to believe Wade over the WHO, but that’s not the point. Do you see how absurd this is, trying to ascertain a scientific fact as if we’re assessing the credibility of witnesses in a sexual harassment case? Well, he lied about the lingerie, but she seems to have been stalking him…

We’re talking about SCIENCE, our new religion! Wear a mask—it’s “SCIENCE”! There’s no such thing as race—it’s “SCIENCE”! Global warming is incinerating our planet—it’s SCIENCE! The mere invocation of “SCIENCE” is used to slam the door on any argument.

This week on MSNBC, a host actually said, “There are no bad apples at the CDC.” Every hour of every day, I have to hear about the “bad apples” in policing. But at the CDC? Nope! They’re SCIENTISTS.

Whether the virus that destroyed the world economy and has already killed more than 3 million people came from a Chinese lab or a Chinese wet market, or a Chinese restaurant on the Upper West Side (unlikely), it’s China’s fault. What is mind-boggling about Wade’s article is the overweening and baseless pomposity of our high priests of SCIENCE.