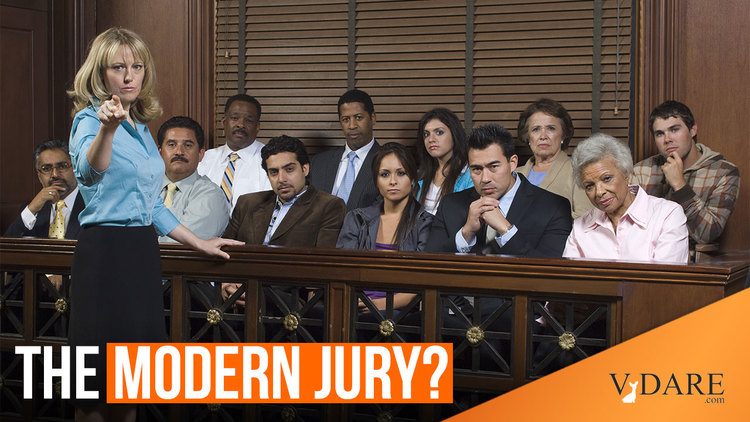 The Chauvin verdict is obviously a grotesque miscarriage of justice, enabling Leftist whites to feel that their sins of racism are forgiven, at least for a while, by atoning for the death of St. George Floyd, the sinless Son of Man; and enabling America’s Totalitarian Left to continue its Mao-style Cultural Revolution in America. Unfortunately, however, such verdicts are likely to become the norm as the jury system buckles under the influx of women, minorities and—perhaps ultimately most alarming—a decline in average IQ among whites.

The twelve members of the Chauvin jury consisted of four white females, two mixed-race females, one black female, three black males, and just two white males, one of whom was Jewish [Derek Chauvin trial: What we know about the jury that found ex-cop guilty, by Amy Forliti, AP, April 20, 2021].

So a majority (seven) of Chauvin’s jurors were women. This is interesting because common law jurisdictions prohibited women serving as jurors until surprisingly recently. The Civil Rights Act of 1957 first gave women the right to serve on federal juries, but it wasn’t until 1973 that all 50 states had passed similar legislation [History made when women were allowed to serve on jury, AP, November 16, 2018].

There may have been a reason for this prohibition. As I discussed a while ago in Are Women Destroying Academia? Probably, females are on average less intelligent than males, lower in systematizing, and higher in “empathy,” meaning that they are more inclined to put social harmony ahead of “the truth” and they are more open to emotional arguments. (This is why geniuses—who combine very high IQ with an autistic focus on “the truth” and consequent complete lack of interest in our ability to feel “empathy”—are overwhelmingly male).

So having so many women on the jury probably wasn’t good for Chauvin. (Let the record show, however, that the jury that acquitted George Zimmerman was entirely made up of women. See Why the George Zimmerman Trial's All-Female Jury Is News,  by Andrew Guthrie Ferguson, The Atlantic, June 21, 2013.)

The Chauvin jury was half non-white. This was probably more a problem for Chauvin. As I have shown, black people—partly because they’re less intelligent on average and partly because they are more ethnocentric than whites—possess less of a concept of “fairness.” (The same is true, in a more complex way, for Jews.) This means that, all else being equal, the jury system is more likely to deliver an unfair verdict if they are on the jury, especially in a case where a white cop is accused of murdering a black man.

Women are significantly less likely to support the principle of objective law than men, 49% to 59%, and more likely to be unsure about the issue 12% vs. 8%. (Unfortunately, no data was published by race combined with gender, but this pattern presumably holds for white women. See Voter Belief that Supreme Court Should Stick to the Constitution Plunges. Racial breakdowns in crosstabs, available to Platinum Service subscribers.)

Note that the pollsters also report that support for the Supreme Court sticking to the law is falling sharply. One reason for this may be that it takes intelligence to grasp the principle of objective law, and intelligence levels are falling even among whites.

As I’ve written, there’s a growing body of evidence that IQ is in decline. According to research on this decline, set out in the 2018 book At Our Wits’ End: Why We’re Becoming Less Intelligent and What It Means for the Future, by British scholars Edward Dutton and Michael Woodley of Menie, one of the correlates of low intelligence is corruption. And this includes the corruption of the legal system.

As such, At Our Wits’ End shows that from 1100 to about 1800, markers of intelligence increased, even though living standards didn’t increase much at all as, every generation, the least intelligent people died off. Literacy rises, numeracy increases, heads (and thus brains) get larger, people commit less murder and are less cruel (empathy correlates with IQ) and the sort of systemic unfairness known in England as “the Old Corruption” declines, because intelligence predicts superior moral reasoning and simply being less selfish.

More intelligence allows you to better imagine what it is like to be someone else and to have a better understanding, therefore, of what is “fair.” It allows you to rise above your instincts to be selfish or ethnocentric, because “solving cognitive problems,” the essence of intelligence, involves doing this.

But intelligence, according to At Our Wits’ End, has been in decline since at least 1900 due to a variety of factors including reliable contraception (which smart people are better at using), feminism (which persuades smart women to limit their fertility) and welfare (which positively encourages low IQ women to have children). Intelligence is highly genetic, and the book cites research showing that the prevalence of alleles associated with very high educational attainment—and so indirectly associated with very high IQ—has been falling in Western samples across the generations [Selection against variants in the genome associated with educational attainment, by Augustine Kong et al., Proceedings of the National Academy of Sciences, 2017].

Based on per capita levels of major innovation, our average intelligence peaked in about 1870, and has fallen since then by over 15 IQ points; the difference between a high school science teacher and a science professor. Our IQ is now back at where it was in the sixteenth century. And there was little “justice” in the sixteenth century. The legal system was corrupt; a means by which despots, such as Henry VIII, kept themselves in power by executing their political opponents.

This was a period in which juries were intimated, bribed, or even sent back to reconsider if they reached the “wrong” verdict, because people’s “moral reasoning” was weaker. IQ correlates with trust, because people with low IQ can’t work out who to trust, so it’s best to trust nobody [Generalized Trust and Intelligence in the United States, by Noah Carl & Francesco Billari, PLOS ONE, 2014].

So juries couldn’t “trust,” perhaps rightly, that the “system” would defend them if they delivered the “wrong” verdict. And, being less intelligent—with intelligence correlating with analytic thinking—a stupid jury would be more easily swayed by emotional, illogical, post hoc ergo prompter hoc arguments, such as: “He was when kneeling on his neck around the time he died, so that’s why he died.”

So, bringing these trends together, we have a murder trial which has become central to the new religion of “Multiculturalism,” in which George Floyd seems to be some kind latter day “Equality Jesus,” with Nancy Pelosi calling him a martyr [Opinion: Nancy Pelosi's gratitude, and the problem with Black martyrdom, by Sewell Chan, Los Angeles Times, April 20, 2021]. We have a multi-racial, predominantly female jury who will, thus, have been thoroughly inculcated with BLM and won’t be able to see past emotional arguments.

And even if they’re not true believers in the need to avenge St George, the jury know, even more so because they weren’t sequestered due to judicial incompetence or corruption, that they will cause nationwide chaos and death if they deliver the “wrong verdict,” as Congresswoman Waters made clear.

All of this will persuade them to convince themselves that they believe in the “right” verdict, or just go along with it anyway; hence, the quick deliberation. Low in trust, they may fear that their names will be leaked if the “wrong verdict” is delivered. Indeed, even the judge clearly felt the pressure, admitting that there were grounds for an appeal due the inability for there to be a fair trial, but dismissing the motion for a mistrial nevertheless.

So it makes perfect sense why Derek Chauvin has been convicted for the “murder” of the violent criminal George Floyd. It’s just even worse news than we thought.