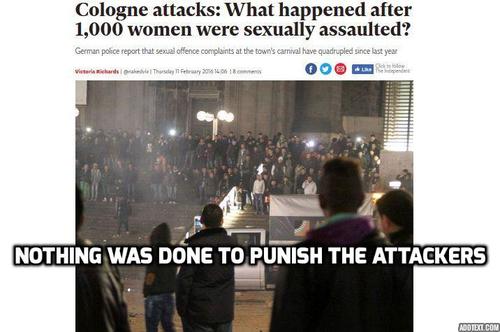 Imagine that two football teams of two rival states facing off at the Super Bowl—the Minnesota Vikings and Wisconsin’s Green Bay Packers. As luck would have it, the Super Bowl is being held in Minneapolis—Minnesota’s biggest city, and just a short drive from the Wisconsin border. As the game got going, tensions between the rival fan groups start to rise. More and more alcohol is consumed. The two teams are neck-and-neck with ten minutes left on the clock. Suddenly, all hell breaks loose—the way it sometimes happens with large groups of drunk and angry people. Imagine the fans of both teams running riot. Imagine police later estimating that, that night, about 2,000 men across Wisconsin and Minnesota committed around 1,200 sexual assaults—including rapes—in public, on women suspected of being supporters of the other side. The majority of the assaults took place in public places, such as bus terminals, train stations, and parking lots. The men worked in groups, with some creating a human wall around one or two women while individual men then committed vile acts.

Now imagine what Main Stream Media coverage of this would look like. Think of what actions journalists would demand be taken by law enforcement and public safety officials. Ask yourself how many of the trials would be covered live by 24-hour cable TV. How many talking heads would call for football to be abolished, or at least the NFL? How many screeds about “toxic masculinity” or “male privilege” would be published?

In fact, the last Super Bowl was indeed held in Minneapolis, Minnesota. But my imaginary scenario did not happen. The Philadelphia Eagles beat the New England Patriots. No riots or rapes came of it.

Instead, the numbers I cited come from the police estimates of 2015/2016 New Year’s Eve in Germany, across the cities of Hamburg, Dortmund, Düsseldorf, Stuttgart, Bielefeld, and most especially Cologne. That night it is estimated that around 2,000 men committed around 1,200 sexual assaults, including rapes, mostly in and around public transit hubs, just as described above.

These crimes were undeniable. They were committed on a massive scale by thousands of perpetrators in public areas. The victims did go to the police. To my knowledge, no public figure of any remote importance has denied that this happened. Details about it can be found in publications as mainstream as The New York Times and The Washington Post. [Leaked document says 2,000 men allegedly assaulted 1,200 German women on New Year’s Eve, Washington Post, By Rick Noack, July 11, 2016]

Of the roughly 2,000 attackers, how many do you think have been convicted in the nearly three years since all this happened?

How come a mere six out of the 2,000 men who committed such flagrant crimes in public on a holiday get convicted?

Well, the men who did this were overwhelmingly Arab and African immigrants or children of immigrants. Convicting non-whites, especially immigrant non-whites, of crimes is considered unseemly by the ruling class of Germany and of most of the West.

Here in America, the MSM and academe are constantly reminding us of this as well: that non-whites, especially blacks, are picked on and incarcerated unjustly by police. They would like to see non-whites incarcerated and shot by police at identical rates to whites.

But what if non-whites actually do commit more crimes than whites? Well, then the solution is to simply let them commit crimes with impunity. Better to have women raped then to have rates of arrest or imprisonment that show racial disparities. 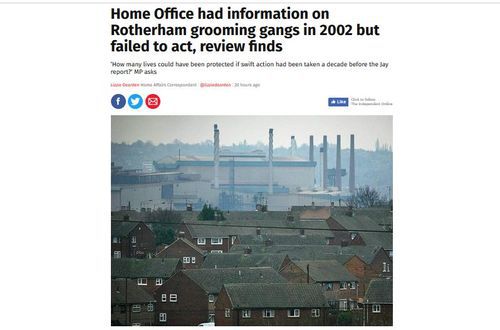 This was the story behind what Wikipedia calls the “Rotherham child sexual exploitation scandal” in the United Kingdom as well. For years in the city of Rotherham, a group of men were grooming, pimping out, and raping teenage girls without consequence. Plenty of townsfolk noticed that something was going on, but nobody did much about it because the men behind it were largely Muslim Pakistanis. Better to let a few (well maybe not a few, more like 1,500) white teenage girls be raped a few times (or many many many times) then have somebody think you are a racist.

As with the New Year’s Eve attacks in Germany, what happened in Rotherham is not subject to debate. Eventually people did come forward and the ring of South Asian men were exposed and brought to trial.

In America, we have not yet had a scandal this big—though there have been small examples of the same phenomena. For example, in 2017 an illegal alien named Luis Baez was driving for Uber under a fake name and raped a customer. He was apprehended, and it was discovered that he had been previously deported and had prior rape charges brought against him. The prosecution recommended his bail be set no lower than $100,000 and that if he did make bail that he be made to wear a tracking device. 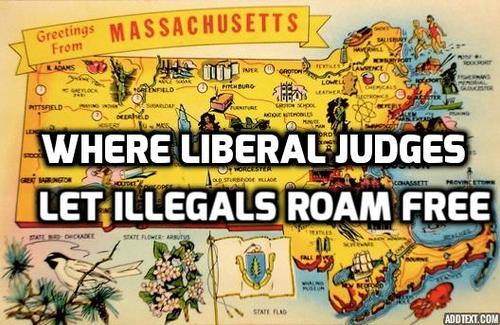 But the liberal female Massachusetts judge, Mary Beth Heffernan, ignored this and set Baez’ bail at $2,500, with no requirement for a tracking device. He paid bail and promptly disappeared. He is still at large. [ICE seeks Uber rape suspect, by Brian Dowling, Boston Herald, April 27, 2017.]

Better to let a serial rapist go then to deport a poor hapless (illegal) immigrant!

This is what “rape culture” really amounts to: powerful people across the West preferring to have rapists running free to imprisoning and/or deporting non-whites.

They of course do not ever say this explicitly. But when presented with the choice, they choose to have rapists at-large. And their allies in the feminist media do them the courtesy of staying silent about it.

Instead, feminist websites instead focus on condemning “sexist” films such as Fight Club and “sexist” novelists such as Jonathan Franzen. These gendered cultural criticisms are viewed as more important than condemning judges or public officials who could have stopped any of the above listed crimes, but chose not to.

When you have the feminist media, and its allies in the university system, spending more time debating whether or not this or that television show is “sexist” or “empowering” than they do talking about the Rotherham scandal, then you have a rape culture. As a female writer at Breitbart put it at the height of Angela Merkel’s  “migrant crisis”: “Western Women Will Be Sacrificed At The Altar Of Mass Migration”, by Anne-Marie Waters, October 6, 2015.

Feminist figures such as Jessica Valenti will not talk about this. They just do not care. The time for them to speak up about this problem was at least three years ago. They instead talked about how Donald Trump was a chauvinist and an idiot—or topics even more inane.

I am in no way exaggerating. Take for example the website EverydayFeminism.com. It is quite popular. At the time of this writing, per web-traffic-measurer Alexa, it ranks as the 21,784th most popular site in America. VDARE.com is far behind at 45,472nd. But the word “Rotherham” has never appeared on EverydayFeminism.com. (See for yourself here.) As I write, at the top of the site is an ad that reads “Join our free webinar on healing from internalized whiteness.”

On the similar feminist website Bitch Media (28,058th most popular in the US, per Alexa), the only instance of the word “Rotherham” appears in a comment thread at the bottom of this page. It reads in part: “Why do  today's 'feminist' ignore mass rape like in Rotherham and this rape but produce article upon article about micro-agressions [sic] and manspreading. Priorities? What is the reason?” There is no reply to the comment. But if I search Bitch Media for “Miley Cyrus,” the obnoxious pop star, there are dozens upon dozens of results.

Jezebel, the queen of feminist websites (788th most popular in the country, per Alexa), ran exactly one full article about the Rotherham scandal: New Details Emerge in Case of Horrifying British Sex Abuse Ring, by Isha Aran, Jezebel, September 2, 2014. However, their tag for Miley Cyrus contains more articles than I can reasonably be expected to count. Some headlines that jump out at me as I peruse this tag include, “A Lot of People Just Got Married, But Not Miley Cyrus,” “All Your Favorite Celebs Are Truly Proving That Buzz Cuts Are SO Beautiful,” and “Miley Cyrus Is NOT SORRY for That 2008 Photo Shoot Everyone Freaked Out Over, OK????”

The above-cited story of Luis Baez, the illegal alien rapist, was not covered by any feminist outlet, or any Leftist outlet of any kind.

This silence in regard to these crimes, maintained by exactly the people who claim most fervently to be standing up for the rights and well-being of women, really is “rape culture.” Letting rape go unpunished because of the rapist’s race is “rape culture.” Leaving your border porous so that men from countries where rape is more prevalent and less frequently punished (e.g. the Islamic world and Latin America) is “rape culture.” Campaigning to abolish law enforcement agencies that apprehend and deport rapists is “rape culture.”

The Left, until further notice, cannot be made to care about this. Even I am shocked at how little impact the stories coming out Cologne, Rotherham, and across Europe have made on how American Leftists think about immigration. They simply do not care.

To ensure that those sorts of measures are not struck down by courts, as happens all too frequently, America needs judges who are sure to recognize their constitutionality. President Trump, with a Supreme Court fully backing him, will be able to do quite a bit to keep Americans safer from the chaotic and violent world that surrounds and seeks to engulf us.

As you may have heard, there is now a vacancy on the Supreme Court. The man slated to fill it, depending upon who you ask, either has some skeletons in his closet, or some nasty smears on his doorstep. It is hard to know for certain what is true.

But what I know for sure is what he will be able to do to protect well over a hundred million American women if he is confirmed.