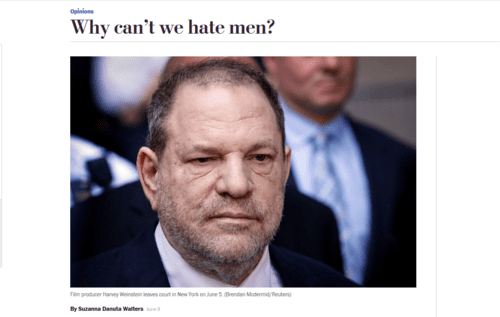 Why can’t we hate men?

Suzanna Danuta Walters, a professor of sociology and director of the Women’s, Gender, and Sexuality Studies Program at Northeastern University, is the editor of the gender studies journal Signs.

It’s not that Eric Schneiderman (the now-former New York attorney general accused of abuse by multiple women) pushed me over the edge. My edge has been crossed for a long time, before President Trump, before Harvey Weinstein, before “mansplaining” and “incels.” Before live-streaming sexual assaults and red pill men’s groups and rape camps as a tool of war and the deadening banality of male prerogative.

Seen in this indisputably true context, it seems logical to hate men

“Seen in this indisputably true context, it seems logical to hate men” — Take that, Aristotle, Boole, and Frege! Your male logic is, like, over.

I can’t lie, I’ve always had a soft spot for the radical feminist smackdown, for naming the problem in no uncertain terms. I’ve rankled at the “but we don’t hate men” protestations of generations of would-be feminists and found the “men are not the problem, this system is” obfuscation too precious by half. …

So, in this moment, here in the land of legislatively legitimated toxic masculinity, is it really so illogical to hate men? … I love Michelle Obama as much as the next woman, but when they have gone low for all of human history, maybe it’s time for us to go all Thelma and Louise and Foxy Brown on their collective butts.

The world has little place for feminist anger.

Other than the oped page of the WaPo, the various women’s studies and gender studies departments, etc etc. But it’s more effective to not come out and admit you are filled with hate. Instead, act like the SPLC and accuse the people you hate of being driven by hate. You’ll be amazed by how gullible the human race is.

So men, if you really are #WithUs and would like us to not hate you for all the millennia of woe you have produced and benefited from, start with this: Lean out so we can actually just stand up without being beaten down. Pledge to vote for feminist women only. Don’t run for office. Don’t be in charge of anything. Step away from the power. We got this. And please know that your crocodile tears won’t be wiped away by us anymore. We have every right to hate you. You have done us wrong. #BecausePatriarchy. It is long past time to play hard for Team Feminism. And win.

From her Northeastern U. bio:

Dr. Suzanna Danuta Walters’ work centers on questions of gender, feminist theory and politics, sexuality, and popular culture and she is a frequent commentator on these issues for the media. Her most recent book, The Tolerance Trap: How God, Genes, and Good Intentions are Sabotaging Gay Equality (NYU Press), explores how notions of tolerance limit the possibilities for real liberation and deep social belonging. This book has been the subject of numerous radio and press interviews and discussions, which can be heard and read on her website www.suzannawalters.com. Walters’ previous book, All the Rage: The Story of Gay Visibility in America (University of Chicago Press, 2001), examined the explosion of gay visibility in culture and politics over the past 15 years and raised pressing questions concerning the politics of visibility around sexual identity. The book was a finalist for several literary awards (including the Lambda Literary Award).

Walters founded the first in the nation Ph.D. program in gender studies at Indiana University, where she was a professor of gender studies and held positions in sociology and communication and culture. Previously, Walters was professor of sociology and director of women’s studies at Georgetown University. She was also a visiting senior scholar at the Center for Narrative Research at the University of East London. She received her Ph.D. from the Graduate Center, City University of New York.

It’s almost as if stereotypes about feminist ideologues tending to be man-hating lesbians are not wholly untrue.