Two teenaged girls were sexually assaulted recently during a Berlin street festival celebrating diversity — what a cruel joke that word has become.

And this crime wasn’t prevented by the substantial police presence, which was alert to mob attacks after the fiasco of mass sexual violence on New Years in Cologne where over a thousand women were attacked.

Concerned German citizen Olaf Spermer participated in a protest after the Cologne attacks against Chancellor Merkel’s policy of admitting so many foreigners. He remarked, “Especially what annoyed us in the past weeks and months, was the whole situation regarding foreigners, that how things were handled and not only I, but many people, think that it will all end in a very bad way.” 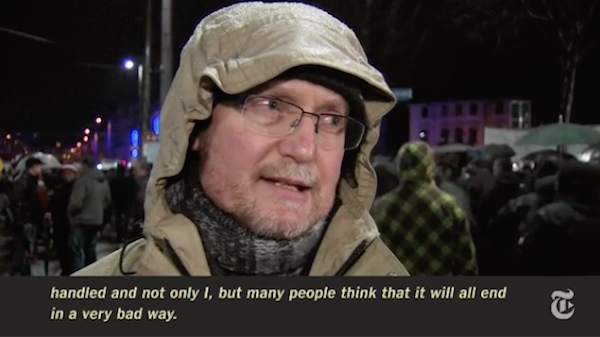 A German morning show reported on the Berlin attacks, and the growing fear of German women about their diminishing public safety was an important theme. That reaction is just what jihadists want, since they believe women should stay home out of sight, just as Islamic sharia law dictates. Islamic immigration is making European women less free in their own nations.

TV HOST: Two young women suddenly found themselves surrounded, sexually molested, and robbed. The incident strongly reminds us of the sex mob on New Year’s Eve in Cologne, and of course, the question remains: How safe are these big events for us women?

VOICE-OVER: Groped, forced to the ground, and robbed. Two 17- and 18-year-old girls just wanted to dance to African music at the Carnival of Cultures, when they suddenly found themselves surrounded by about ten men. A barkeeper named Melanie was nearby.

MELANIE: “I just heard that one girl threw herself on the floor, to make it appear as if she had blacked out, so that they might leave her alone, but on the contrary she immediately was robbed and groped. One passerby put himself in between, but they pushed him completely to the side.”

VOICE-OVER: But the passerby did not give in. He positioned himself protectively in front of the girls. The police then arrived, and they were able to arrest three teenage suspects. But this did not remain the only incident of this kind; attacks took place multiple times. Maik Mischek was a witness to many cases of the so called “Mob-Dancing” [“Antanzen”] ploy.

MAIK MISCHEK: “There just were so many pack formations, aggressive behavior, especially towards women, they move in small groups, about four to ten people, and then they just kinda push and dance into the women, and when they are so close to the women, they grope the women’s breasts, they grope butts, they just grope, in the most vile and disgusting way.”

VOICE-OVER: The Carnival of Cultures is the most popular street party in the capital city. Over 1.5 million people yearly visit this usually very peaceful event. These attacks over the weekend showed a dark side, and it reminded people of the sex mob attacks on Silvester Night in Cologne, during which over 1,100 women were attacked near the main train station through the use of “Mob-Dancing”, sexually molested and robbed. After the attacks in Berlin now, fear has become a constant companion.

MELANIE: Now of course one thinks about whether to even go to street parties, after a certain time at night I personally don’t go out anymore, especially not alone, if I were all by myself. One would constantly look back over one’s shoulder, be afraid, how suddenly, somehow a guy is behind you, or in front of you, if it turns into a group, you just don’t know.

VOICE-OVER: During the incidents at the festival two 17-year-old attackers with Turkish passport and one 14-year-old person without verifiable nationality were arrested. One of the attackers was in possession of the cell phone of one of the victims.

BERLIN POLICE OFFICER JENS BERGER: All three were already known to the police, through other infractions, assault and bodily harm, property offenses. The three were taken to the station, and questioned, finally they were handed over to their parents — all three of them were youths.

VOICE-OVER: Investigations are now ongoing concerning more suspects, but despite the effort of 800 police officers, it goes to show that women just cannot be fully protected at large events. After the incidents were made public, another victim came forward via Facebook. She is a 16-year-old girl, and quite certainly she won’t be the last victim of a sex attack in Berlin.

This is a topic that will continue to keep us engaged. Unfortunately.