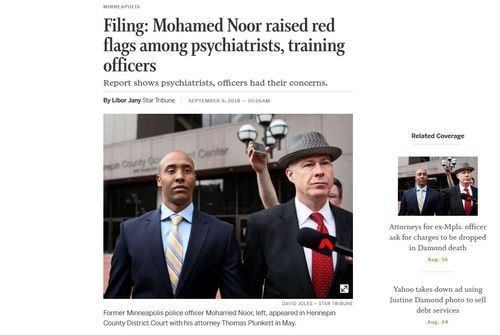 Attitude Of Somali Cop Who Shot Blonde Lady: "Look At Me, Minneapolis. I Am The Policeman Now."

Revelations about Noor’s past were introduced by Hennepin County prosecutors on Wednesday in response to a motion by defense attorneys to dismiss the third-degree murder and manslaughter charges filed against him in Damond’s death.

According to prosecutors, Noor was flagged by two psychiatrists during the pre-hiring evaluation in early 2015 after he exhibited an inability to handle the stress of regular police work and unwillingness to deal with people, according to the records.

The report went on to say that Noor was more likely than other police candidates to become impatient with others over minor infractions, have trouble getting along with others, to be more demanding and have a limited social support network. They showed he “reported disliking people and being around them.” …

Elsewhere in the filings, one training officer noted in a report that on Noor’s third to last training shift in the spring of 2016, he at times didn’t want to take calls, instead driving in circles when he could have assigned himself to them. The calls were for simple matters, such as a road hazard or a suspicious vehicle where the caller was unsure of whether the car was occupied. …

“He made no attempt to identify a threatening situation, let alone de-escalate one,” the motion said. If the defendant had made an inquiry into the circumstances, he would have realized Ms. Ruszczyk was an unarmed woman who had called 911 twice to report a possible crime, and who wanted to speak to him and Officer Harrity before they drove away, having conducted only the most cursory, less-than-two-minute investigation into her calls.”

Sure, the Minneapolis PD and the mayor gave this dangerous loser chances over and over because they were so desperate to add another Somali immigrant policeman. But one less Becky is a small price to pay for Our Diversity.
[Comment at Unz.com]