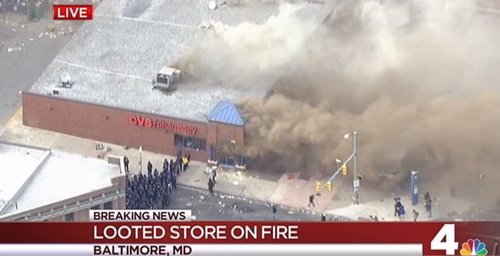 Re: Ann Coulter’s column Citizens Who Want To Live In Safe Neighborhoods–Black People The Media Hate (And Rand Paul Isn’t Wild About)

They may not realize this, but somewhere in their subconscious this has to be the case.

I just read a story on Breitbart which stated that a few weekends ago, Baltimore topped its all-time murder record in a weekend. There is no way this is unrelated to the constant far-left provocations.

The logical next step after these international faux-outrage incidents is that cops stop enforcing. Why would they put themselves in harm’s way, if they know that faced with defending themselves, they will be the latest subject of the "Two Minute Hate"?

They're going to risk having careers stripped, being jailed or forced into hiding because some leftist crybabies with a megaphone want to gin up "righteous anger" amongst criminals in their community? I'd rather just sit around eating donuts too.

Granted, there is a definitive problem with the criminal underclass in the black community, but isn't agitating against law and order in a dangerous neighborhood harmful to those who need protection from the police? You know, like other black people?

As Ann Coulter has pointed out on numerous occasions, it's always other blacks in the community who are witnesses against the defendants in these cases. They can't stand the lawlessness in their communities. They are the ones most terrorized by the "gentle giants" on a daily basis. It's the homies with the red rags who come up with the "hands up don't shoot" narrative. And coincidentally, it's red rag wearing absentee parents that have no problem cashing in on their son’s death, as in the case of Mike Brown. The law abiding blacks in the neighborhood tell the truth.

I have a hard time believing people like George Soros really think that police are some KKK force arresting and killing blacks constantly for no reason. It doesn't even make sense for educated people like Obama or Holder to truly believe this. It appears to this observer the whole thing is a Trojan horse to federalize the police force. (Possibly for Holder and Obama, it's some sort of attempt to assuage their upper class guilt and be "down with the struggle", however I think this is just a means to an end for them as well.)

So why do white liberal SJWs believe this? Why do they always side with the criminal element over the law abiding in the black community? Shoot, let's get to brass tacks. The SJWs ARE the establishment now. So why do they NOT ALLOW the law abiding, peaceful blacks of Baltimore and Ferguson to have a voice in the media?

Why do the SJWs support this "disparate impact" nonsense? Law abiding blacks in these neighborhoods are well aware that on average blacks commit more crimes against person and property than whites. Is that going to stop them from calling the cops when their house is being burglarized? NO, it won't. They know damn well that their kids will have a harder time getting an education, NOT because of "systemic racism", but because of systemic idiocy in black popular culture that glamorizes violence and criminality, and also a failure to enforce discipline in schools because of this so-called "disparate impact".

Where are the SJW tears for property values of blacks in Ferguson and the now destroyed towns that these "social justice" events cause?

I have a black friend of 20 years who is looking to retire soon, sell his house and move to a cheaper area. Thank God for him the social justice mob hasn't got their sights on his town. His plans would be decimated and he'd be stuck where he is, in a destroyed town.

Since 1965, everything the SJWs have touched in the black community has turned to mush. The number of children born out of wedlock has skyrocketed. Crime has skyrocketed. The culture has degenerated.

Look at pop culture, the current cultural Marxist battering ram. In 1965, one of the most prolific pop songwriters was Smokey Robinson, who Bob Dylan called the "greatest living poet of our time". The genius arrangements of the Holland–Dozier–Holland team at Motown Records have influenced generations and will continue to stand the test of time.

Now Beyoncé is hailed as a feminist while her husband sings about beating women. And they are viewed as heroes by the SJWs for bailing out vandals in Baltimore. 'Lil Jon', and countless others like him are illiterate buffoons making tone deaf music is regarded as art by pretentious liberals.

Booker T Washington is rolling over in his grave.

These SJWs are signaling. They don't care about blacks.