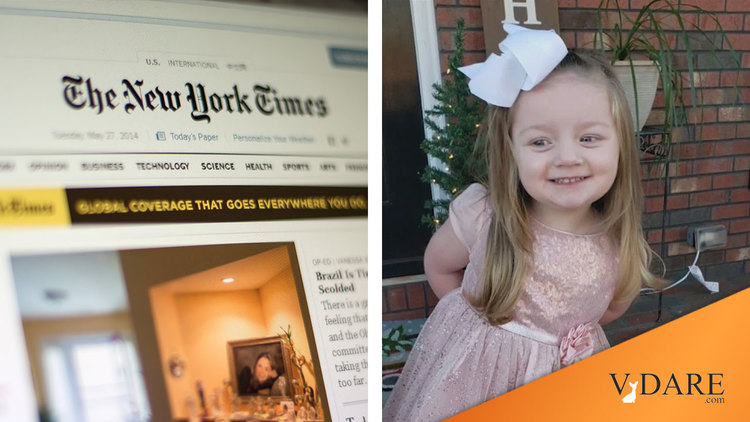 WAR ON WHITES: Tori Smith's Murder Just The Latest Black-On-White Atrocity Not "Fit To Print" According To The NEW YORK TIMES

The New York Time's motto, dating back to 1896, is "All The News That's Fit To Print." One of the earliest articles I read on VDARE.com , before I started working here myself, was Scott McConnell's Unfit To Print, January 10, 2000, about the Wichita Massacre, in which three white men and two white women were abducted, abused, and then shot by two black men, killing four of them and wounding one. The details of that didn't appear in the NYT until 15 years later, when Justices Alito and Scalia mentioned them in the killers' death penalty case.

Murders of whites by blacks are very rarely "national news" as far as the New York Times news section is concerned.

On the other hand, any mild incident of alleged racial disrespect to blacks does turn out to be national news. For example, Steve Sailer likes to highlight the fact that an anti-white agenda is being injected into news reporting by saying that some particular item is "from the New York Times news section."

Black Deliveryman Says He Was Blocked and Interrogated by White Driver

Travis Miller Sr. said he was trying to leave a gated neighborhood in Oklahoma after a delivery when a vehicle blocked his path.

In contrast, the New York Times has never once published the names of the two white octogenarians visiting their son’s grave who were gunned down by a black man on May 8, the day after the first (of now 3) arrests in the Ahmaud Arbery story promoted so extravagantly by the NYT. Two and a half weeks later, the police have yet to venture to suggest a motive.

Some news is not fit to print

The allegedly random murder of two elderly white people, Paul and Lidia Marino, in a Delaware Veterans Memorial Cemetery, by a black man named Sheldon Francis, is one of the many anti-white hate crimes which the NYT finds Unfit To Print.

We covered the Marino case, based on fragmentary reports from the local press, but the NYT didn't:

The (as far as I know) justifiable homicide of black ex-convict Ahmaud Arbery did get a lot of publicity, because the white guy who shot him when Arbery tried to grab his shotgun has been charged with murder. (See Faith Goldy's Faith Goldy: Black Lies Don’t Count—And White Lives Don’t Matter.)

This was pre-Floyd, so it was the biggest thing at the time, and it may well have motivated the murder of the Marinos, just as Obama's rhetoric may well have motivated the five murders committed by BLM gunman Micah X. Johnson in Dallas in 2016.  Since Sheldon Francis was killed by police, and won't go to trial, the Regime Media is free to run headlines like Motive Remains Unclear In Delaware Cemetery Shooting That Left Elderly Elkton Couple Dead,CBS Baltimore, May 23, 2020.

But the New York Times has run nothing at all.

The same thing happened with the murder of Cannon Hinnant, a five-year old white boy in North Carolina, shot by Darius Sessoms, who is black, apparently for accidentally riding his little bike in the black man's front yard.

This has not once been mentioned by the New York Times. But it was mentioned by Forbes magazine in what people think of as a "conservatives pounce" story:

How The Murder Of 5-Year-Old Cannon Hinnant Became A Conservative Controversy About Race, by Lisette Voytko,  August 17, 2020

The shooting death of a 5-year-old North Carolina boy in his front yard on August 9 has since erupted into a political argument over how the media covers race and crime, with conservative commentators on Fox News and other outlets criticizing the media for ignoring the fact that the boy was white and the suspect Black, though many national news outlets did in fact cover the killing, which both police and the boy's parents say they don’t believe was racially motivated. [More]

I called this a "conservatives pounce" story, but the Washington Post actually said it was "seized upon" by "some conservative outlets" [What we know about the killing of 5-year-old Cannon Hinnant, by Brittany Shammas, August 14, 2020].

But the New York Times didn't even run a "conservatives pounce" story because there's no way of reporting this story that doesn't say a black man shot a five-year-old white boy.

The latest case not fit to print: the death of Victoria "Tori" Rose Smith, a white child who was allowed to be adopted by a radical black couple...and is now dead. (There are lobbies and laws to prevent white people from adopting black and Native American children, but obviously no such restrictions the other way.)

See, by Paul Kersey Her Name Is Victoria "Tori" Rose Smith: Three-year-old White Girl Beaten To Death By Her Black Adoptive Parents  and by Michelle Malkin: The Matter of Tori Rose Smith's Life.

As you can see, below, her black adoptive parents put her hair in "corn-rows" for some reason.

This story, about an adopted child found dead from multiple blunt force trauma to her head in the home of a woman who, her social media reveals, expressed hate towards white people and thought her own adopted children had "white privilege" actually made the Los Angeles Times, on a strictly non-racial basis, because of the woman's minor television celebrity: Food Network removes season of cooking show after winner arrested in child’s death, by Christi Carras, January 25, 2021.

It hasn't made the New York Times.

The Times's apparent reason for this policy is that reporting this stuff makes blacks look bad, and could cause "racism."

This could be true. Here are some of the details of the Wichita Massacre, which as I said at the top of the page, went unreported for years:

Their cases “involve some of the most horrendous murders that I have seen in my 10 years here,” Justice Samuel A. Alito Jr. said. “And we see practically every death penalty case that comes up anywhere in the country.”

Justice Scalia recited the details of the brothers’ crimes at length.

They broke into a Wichita home where five people were staying and forced their victims to strip naked and perform sex acts on each other. The brothers then raped the women in turn. Then they drove all five victims, still naked or partly clothed, to a snowy field where they shot them execution-style in the backs of their heads as they knelt.

One woman survived, spared when a bullet was deflected by her hair clip. “Oh, and they ran over her, too,” Justice Scalia said. “After shooting her in the head, the car ran over her.”

That only appeared in the NYT when lawyers for killers Jonathan and Reginald Carr appeared at the Supreme Court in attempt to prevent their well-deserved execution, an attempt the Supremes rejected, 8-1 (Sonia Sotomayor dissenting) although the Carrs are still alive on Death Row in Kansas.

Maybe if NYT readers found out about things like that, they'd stop believing in the myth of "racism."

James Fulford [Email him] has been a writer and editor for VDARE.com for twenty years.