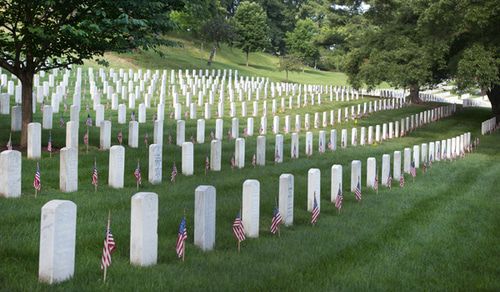 Last year on Memorial Day, I had a tribute to the late Kevin R. C. O'Brien (of Weaponsman.com) a Special Forces veteran who died in April, 2017.

Kevin would make the point, as a veteran himself, that Memorial Day is not the day to say to veterans "Thank you for your service" (that's Veterans Day) it's the day to remember the honored dead, who didn't live to be thanked. [“Happy Memorial Day?” | WeaponsMan, May 30, 2016]

This year, I want to repeat something I said in 2010, when Obama was President: Memorial Day came into being after the Civil War, as "Decoration Day", a day for memorializing the honored dead, of whom there were a great many, by decorating their graves with flowers.

There have been enough foreign wars since then that Northern and Southern bodies are found in military cemeteries in about equal measure. That North and South were fighting external enemies together was part of the Great Reconciliation that is described in Paul H. Buck's 1937 book, The Road To Reunion 1865-1900, which you can download for free from Archive.org. (This book is now unpopular—and so is the actual post-Civil War reconciliation.)

As part of the reconciliation, Congress in 1878 passed the Posse Comitatus Act, which forbids, roughly speaking and subject to certain exceptions, using American soldiers on American citizens. It was Congress's way of saying "Sorry!" for Reconstruction and the Force Bills, and promising not to do it again.

I mention all this, because of meme popular around 2006 (when Bush was President) which was that America's war dead "didn't die for open borders".

You don't honor the men who died for their country by surrendering it to invaders.