In the Dallas "Black Lives Matter" shooting, the shooter is black: Micah X.  Johnson, pictured above in both US Army uniform and "black identity" clothing.

The MSM is printing photographs of him, but the headlines aren't saying  he's black. (Checkout the Google News results.) This is how it appeared on my iPhone: 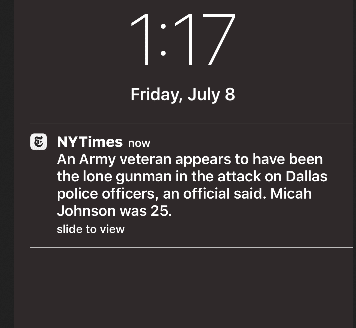 That should say "black Army veteran"—his race is very much the most important thing about him. This isn't just a case of a black gunman killing a bunch of people because he's robbing their store, or angry with them over drugs—he committed this murder because he was black.

In that way he resembles the shooters in "Disgruntled Minority Massacres" I've mentioned before. They shot up their employers, or a City Council meeting because they'd decided their victims are racist. That's what this guy was doing.

But when those guys did it, it was an individual black atrocity—the kind of thing the MSM has tried to avert its eyes from.

This man is part of a national movement—Black Lives Matter—which is supported by the President of the United States. It's just crazy not to mention—front and center in the headline—that he's black.