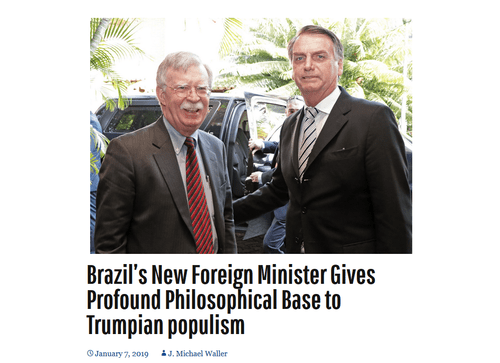 For immigration patriots, Brazil was usually the nightmare scenario for an American future. Today, it might be something of a model to follow. The victory of Jair Bolsonaro shows the national populist right has a future even in a majority-minority state. Bolsonaro is not just a singular figure, as there is a larger nationalist movement behind him. Bolsonaro is doing what President Donald Trump should have done, removing leftists from the bureaucracy. [Jair Bolsonaro: Brazil's new far right president fires hundreds of 'left wing' civil servants, by Shehab Khan, UK Independent, January 4, 2019] Bolsonaro also has leftists panicking about a long overdue "anti-communist witch hunt" in the universities and the upcoming abolition of anti-white racial preferences ("affirmative action") policies. [Bolsonaro poses a serious threat to higher education, by Marion Lloyd, University World News, November 2, 2019]

As Mike Cernovich pointed out, Bolsonaro is what Trump pretended to be.

Members of Bolsonaro's administration are also serious rightist thinkers. A fascinating article shows the new Foreign Minister, Ernesto Henrique Fraga Araújo, has done perhaps a better job than anyone else in providing a global framework for nationlist populism. It also has some key insights as to whether South America (Brazil isn't really "Latin" America, as it speaks Portuguese, not Spanish) is part of the same civilization as Europe and North America.

The Center for Security Policy has now provided an English language translation of Araújo's article on "Trump And The West" into English for the first time. It is an absolute must read, and shows Brazilian conservatism is far more serious than the tedious sloganeering of Conservatism Inc. It is an invaluable perspective not just on the current historical moment, but on our civilizational identity.

President Donald Trump proposes a Western vision based not on capitalism and liberal democracy but rather on returning to a symbolic past, history, and culture of Western nations. Trump’s vision has deep roots in a longstanding intellectual, sentimental tradition stretching from as far back as Aeschylus to Oswald Spengler; and it views nationalism as inextricably linked to the essence of what the West is. At its core is neither an economic nor a political doctrine but a yearning for God – the God who acts in history. It is not about Western expansionism, but pan-nationalism. Brazil needs to do some reflection, to determine whether it is part of this West...

Patriotism is therefore part of the very essence of the West. It was not the brainchild of philosophers; it was felt by men facing the risk of death – and let’s not forget that, for those familiar with the “metaphysics of war,” as Julius Evola calls it, the cry issued from the chest of a man in the heat of battle is sacred; it does not really come from him but is inspired by the god. That cry of “Set your country free!” never arose in Babylon or Egypt – those cultures have nothing like the concept of country. The Egyptians believed they lived on sacred ground that reproduced the shape of the sky (the Nile was equivalent to the Milky Way, the pyramids at Giza to the constellation Orion, where the immortal souls of the pharaohs went, at least according to Robert Bauval’s interpretation), but in the extensive body of literature of Egypt there seems to be nothing quite like the cries of Salamis. The soldiers in the Eastern sovereign states fought for payment, for booty. They fought as hard as they could for allegiance to the king (which could be easily switched), but never for “country.” Ancient nations certainly fought for liberty, others for the survival of their family, and others still for their gods, or for the tombs of their elders; none but the Greeks, however, fought for country as all of those things together – for country as an inseparable union of freedom, family, history, and belief. None but the Greeks celebrated country and its liberation through drama.

Drop what you are doing and read the whole thing.