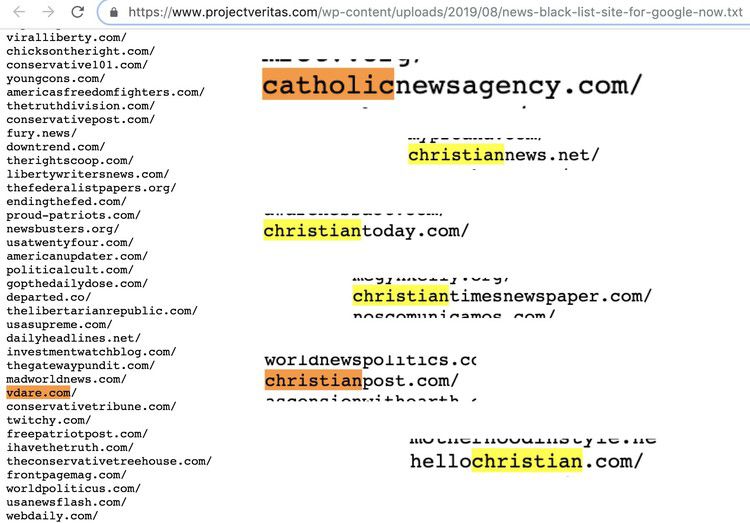 I learned last week from a Silicon Valley whistleblower, who spoke with the intrepid investigative team at Project Veritas, that my namesake news and opinion website is on a Google blacklist.

Thank goodness the Big Tech giant hasn't taken over the newspaper syndication business yet. Twenty years of column writing have allowed me to break news and disseminate my opinions without the tyranny of social justice algorithms downgrading or whitewashing my words. But given the toxic metastasis of social media in every aspect of our lives, especially for those who make their living exercising the First Amendment, it may only be a matter of time before this column somehow falls prey to the Google Ministry of Truth, too.

I suspect, because so many of the blacklisted sites belong to the original generation of conservative bloggers, that Google's ideology-based censorship significantly predates the timeframe of the documents that Vorhies (who worked at Google for eight years) shared with Project Veritas. Indeed, my first substantiated censorship by Google/YouTube, which was covered by the New York Times, occurred 13 years ago in 2006. [A Slippery Slope of Censorship at YouTube ,by Tom Zeller Jr., NYT, October 9, 2006] Around that time, it also became clear to me that humans, not algorithms, were manipulating Google Images to prioritize unspeakably crude photoshopped images of me disseminated by left-wing misogynists. And not long after, my heavily trafficked blog posts started dropping off the search engine radar altogether.

Several previous Google insiders have confirmed that the Big Tech giant discriminates against right-leaning journalists, pundits and personalities—not to mention free-thinking employees within its own workforce who've been persecuted, fired and even harassed by police for their whistleblowing. Leaked documents also show that a small cadre of meddling social justice overlords at Google Central Command manually manipulate search engine results—despite the company elite's brazen denial of the practice at a recent congressional hearing.

In the early days of New Media, entrepreneurs on the left, right and center rallied around the transparency and open access mantra, "Information just wants to be free." Now, in the wholly disingenuous names of "trust" and "safety," the overlords of the internet want to throttle information with which they disagree. Google employees actively demote content on YouTube deemed "controversial queries," according to internal documents from Vorhies, including the following phrases:

"Do vaccines cause autism," "climate change hoax," and "Girl speaks about the danger in Germany due to rape refugees" were also all red-flagged as dangerously "fringe" by the Google P.C. police. So was President Donald Trump's factual statement that immigration chaos has led to "people that are from all over that are killers and rapists and they're coming into this country," which one open borders employee complained was "explicit bias" that "we should take a stand on."

So they're for foreign killers and rapists coming into this country? Noted.

Internal staff complaints catalyze search engine manipulation, so political agitation among Google employees is a harbinger of speech clampdowns to come. Just last week, more than 1,000 Google employees lobbied the company to shun any contract work with U.S. Customs and Border Protection or Immigration and Customs Enforcement. Given that Google works with the hate racket and smear machine known as the Southern Poverty Law Center, you bet I'm worried that my immigration blog and column archives (not to mention all my reporting on the treasonous Silicon Valley CEOs in my upcoming book, "Open Borders Inc.") will trip the Google Social Credit wire.

With Google's homegrown menaces squelching our freedom of expression, damaging our reputations and livelihoods through slimy and secretive blacklists, and hampering our ability to do honest research—not to mention mining student data in schools by tethering children to Google apps/email/Chromebooks and holding their academic progress hostage to Google's high-tech leash—who needs foreign enemies? China ain't got nuthin' on America's "Don't Be Evil" thought control freaks.