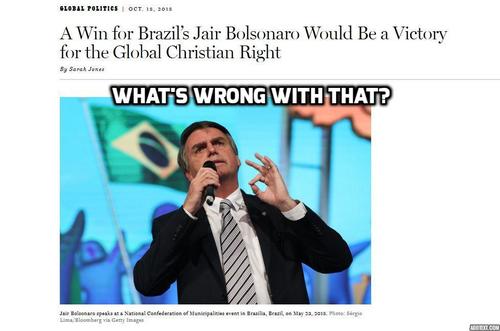 If the polls are correct, on Sunday October 27 the Pentecostal movement will effectively take power in the world’s fifth most populous country—the “Donald Trump of the Tropics,” former paratrooper and current senator Jair Bolsonaro, seems poised to win Brazil’s presidency. [Brazilian elections 2018: New poll claims far-right Bolsonaro may win over HALF of votes, by Joe Gamp, Daily Express, October 24, 2018]

Bolsonaro may well move the country in a strongly conservative direction. But amid all the MSM panic about Brazil’s impending return to the “dictatorship” it emerged from 33 years ago [Brazil elections: prospect of Bolsonaro victory stokes fears of return to dictatorship, by Tom Philipps, Guardian, October 5, 2018], few seem to be asking a key question: How in Heaven (so to speak) have Pentecostals managed to take over a country which, less than 50 years ago, was 95% Catholic? [Brazil’s Changing Religious Landscape, Pew Research Center, July 18, 2013]

And let’s be clear that born-again Bolsonaro’s election (a cradle Catholic, he was rebaptized in the River Jordan by evangelicals in 2016 ) will be a Pentecostal victory. [The Rise of the Brazilian Evangelicals, by Chayenne Polimédio, The Atlantic, January 24, 2018] Thus Bolsonaro didn’t even bother turning up to a TV presidential election debate last month, instead being interviewed on the rival channel owned by Edir Macedo, head of Brazil’s largest evangelical church (in Brazil “Pentecostal” and “evangelical” are essentially interchangeable). Bolsonaro blamed this on his having been stabbed during the turbulent election campaign. But many see it as a way of distancing himself from the “secular” and “decadent” rival candidates.

Some sixty-one per cent of Brazilian evangelicals are set to vote for Bolsonaro, as against 26% for his socialist “Workers Party” opponent in Sunday’s second round—Bolsonaro came very close to victory in the first round. Bolsonaro, known as “The Captain,” has the ardent support of parliament’s “Evangelical Front”—a group of almost 100 Pentecostal MPs [Jair Bolsonaro courts Brazil’s evangelical Christians, by Andres Schipani and Joe Leahy, Financial Times, October 19, 2018] who meet before the daily agenda begins to be filled with the Holy Spirit together. Bolsonaro, like his evangelical base, is against legalizing abortion, against homosexuality, favors traditional sex roles, wants to brutally crack down Favela crime, wants to allow people to carry weapons, and wants to stop the country’s various social engineering programs.

As with Trump, Bolsonaro’s “gaffes”—telling a Leftist MP she was “too ugly to rape”, that women’s proneness to pregnancy justifies their having lower salaries [Presidential candidate said some women are “too ugly to rape”, by Kate Buck, Metro, October 1, 2018], that he’d rather his son was dead than gay, that Brazil’s blacks shouldn’t breed, that democracy wasn’t working, [Jair Bolsonaro; A Soldier Turned Politician Wants To Give Brazil Back to Army Rule,  By James Brooke, NYT, July 25, 1993] and that criminals should be, en masse, tortured then killed—don’t lose him support; they gain him support. [How a homophobic, misogynist, racist “thing” could be Brazil’s next president, By Elaine Brum, Guardian, October 6, 2018]  Like Trump, he says what ordinary Brazilians really think, especially the 48% who are white—though he has surprisingly strong support among women [Women for Bolsonaro, By Chayenne Polimédio, Foreign Affairs, October 26, 2018] and minority populations. [How Bolsonaro Entranced Brazil’s Minorities—While Also Insulting Them, By Anthony Faiola and Marina Lopes, Washington Post, October 24, 2018 and Why Many of Brazil’s Gay Voters Will Overlook Bolsonaro’s Homophobic Rants, By Walter Brandimarte, Bloomberg, October 27, 2018]

And, as with Trump, trust in the political Establishment—who originally dismissed Bolsonaro’s candidacy as a joke—has collapsed, due to revelations of fraud by the majority of legislators (though not Bolsonaro), with Brazilians turning to Bolsonaro’s two major backers: Protestants and the army. [Showdown in Brazil, Deutsche Welle, October 10, 2018]

According to the Pew study cited above, Brazil is roughly 30% Protestant and these Protestants are overwhelmingly—roughly 75%—Pentecostal. This means they are fundamentalists who believe that the Holy Spirit guides their lives, that material success is a blessing from God, and that Brazil is the field of combat upon which a war between God and Satan is playing out before their eyes.

The conversion of Brazil has been a startlingly short process. Originally overwhelmingly Catholic, the country has swung from crisis to crisis throughout the twentieth century due to quite amazing economic mismanagement and corruption. This has meant that between 1889 and 1985, there have effectively been three revolutions—Brazil is now on its “Third Republic”—leading to massive upheaval each time, something that was particularly acute when it returned to democracy in 1985. With the election of the leftist Workers’ Party’s hardliner Lula da Silva as president, in 2003, the government began obsessing about “equality”, losing control of the economy and crime in the process.

Brazil is a world of instability, embezzlement, and danger. Former President Lula de Silva currently languishes in jail for corruption, his misdemeanors having come to light in 2011 during his attempt to put an end to high-level Brazilian corruption, though he remains extremely popular. His successor, Dilma Rousseff, herself tortured under the military dictatorship, was impeached in 2014 for breaking budgetary laws. Brazil’s murder rate is 25 per 100,000, compared to about 5 in the USA and, for that matter, many parts of South America. [Intentional Homicide Victims, United Nations Office on Drugs and Crime, 2016]It is against this background that the evangelicals have made such massive inroads.

People become more religiously devout when they are stressed. Uncertainty leads to stress and religiousness makes people feel less stressed, because the world makes sense and God is watching over them. Pentecostalism is a particularly potent panacea because it gives a very clear—fundamentalist—worldview. The second half of the twentieth century in Brazil saw a huge rural exodus to the cities, rural people being horrified by what they found, and evangelical churches offering the “community” and “moral certainty” they’d left behind. Religiousness is also caused by feelings of exclusion and failure. [The Origin And Evolution Of Religious Prosociality, by. A. Norenzayan, & A. Sharif, Science, 2008]. Pentecostalism deals with this by telling you that you are uniquely moral and Godly and, not only that, but that God will financially socially bless you, thus filling you with self-confidence.

If you’re poor, as so many are in Brazil, Pentecostalism allows you to present yourself as highly moral, in a context in which issues such as immigration are too insignificant to allow you to do that. There is, in fact, empirical evidence that men who are of relatively low socioeconomic status tend to earn more money the more Protestant a Brazilian region is and that when race is controlled for the effect is stronger in Brazilian regions with large non-white populations. In other words, Protestantism reduces prejudice against people (such as the mixed population), likely because it’s an insurance policy of moral behavior [The Growth of Protestantism in Brazil and Its Impact on Male Earnings, 1970–2000, Joseph Potter et al., Social Forces, 2014] and, fascinatingly, these “mixed regions” in the north (apart from the regions with many slave descendant blacks) have tended towards Bolsonaro.

Pentecostalism’s Prosperity Gospel likely also gives people an incentive to work hard in order to prove to themselves that God is blessing them and they are not damned to Hell, the so called “Protestant Ethic”.

And then there’s the clear evidence that evangelicalism works. It is evangelical churches that organize things. It is an evangelical mayor who has been tackling crime in Sao Paulo.[Brazil’s growing evangelical movement to shape election, Deutsche Welle, September 30, 2018]  Pentecostals take over prisons, improve the lot of the inmates and send converts back into the outside world to convert their friends and family. Pentecostals set up help centers, provide meals for the needy so they can “witness to them” [From Jails to Congress, Brazil’s Evangelicals Could Swing Election, by R.T. Watson et al., Bloomberg, October 4, 2018]  and provide medical care and “faith healing” [Born Again in Brazil, R. Andrew Chestnut, 1997] . . . they “get things done.”

This combination of certainty, moral status provision, love bombing, and financial success, seems to have rapidly converted more and more Brazilians, just as a very similar process converted the English to evangelicalism and Methodism during the chaos of the Industrial Revolution. [God is Dead, By Steve Bruce, 2002]

Why Brazil has reacted in this religious way and not Mexico? We can only speculate. Brazil has long been multiracial and multi-ethnic—the impeached former president had Bulgarian parents, Bolsonaro is German and Italian—something which results in distrust even among coethnics, conflict, instability [E Pluribus Unum, by Robert Putnam, Scandinavian Political Studies, 2007] and thus religious fervor. And Brazil, unlike Mexico, happened to import lots of Protestant immigrants, especially from Germany, setting themselves up to be evangelized.

Brazil was long (21 years) under a conservative military dictatorship. its successors swung very strongly against—resulting in the Brazil of carnivals, bikini waxes and socialism. The newly-triumphant Leftist ruling class used the memory of the dictatorship essentially to shame open conservatism out of the public arena, placing the new ruling class and its policies firmly at odds with a conservative population that was too scared to question them. In other words, the Left was setting themselves up for a forceful counter-revolution—and, as with Trump, access to alternative perspectives via the internet is allowing the right to grow and bypass the Leftist Main Stream Media.

The likely moral for people in the West and especially in “secular” Western Europe: fundamentalist religiosity seems to be pretty important in defeating the forces of SJW chaos. It “gets things done”.