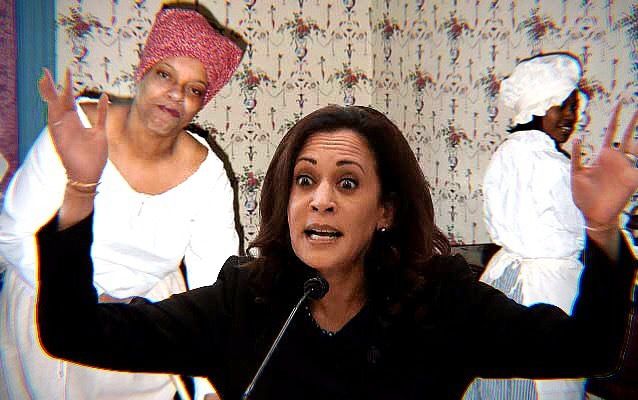 A Movement or a Troll?
Why claims that Kamala Harris “is not an American black” are suddenly everywhere.
By RACHELLE HAMPTON

“Kamala Harris is *not* an American Black. She is half Indian and half Jamaican,” read one of a dozen similar tweets questioning Harris’ identity sent in the moments after she, while confronting Joe Biden’s record of opposing desegregation, recalled being bused to school as a little girl. Another read, “KAMALA HARRIS IS NOT BLACK” and featured a photo of Harris with a “Kamala Dolezal” emblazoned across her face, referencing Rachel Dolezal, a white woman who claims to be “transracially” black.

While Science has proved that Caitlyn Jenner is a stunning and brave woman, Science disproves that anybody, such as the absurd and disgusting Rachel Dolezal, could possibly ever change their race, which is an innate genetic reality.

Also Science has proved that race does not exist biologically. Read a book!

Yet another read, “Kamala Harris is implying she is descended from American Black Slaves. She’s not. She comes from Jamaican Slave Owners. That’s fine. She’s not an American Black. Period.” That last one, written by black right-wing provocateur Ali Alexander, was retweeted by none other than Donald Trump Jr., along with a question: “Is this true? Wow.” …

At first glance, the tweets questioning Harris’ black bona fides look apiece with the racist birther conspiracies levied against Barack Obama when he ran for president—the tweets are an effort to paint her as an imposter (and indeed, there’s evidence the “Kamala Dolezal” memes originated in the same toxic spheres as the birther movement). But a quick look at the bios and tweets of the people who have most vocally and consistently questioned Harris’ blackness, and her ability to speak to the experience of black Americans, most frequently feature not the #MAGA hashtag, but another one: #ADOS, or American descendants of slaves.

According to one theory, accounts that use #ADOS are a sinister collection of Russian bots and trolls sowing misinformation and apathy toward Democratic candidates in the runup to the 2020 election. Or they’re a façade for nativist white supremacists who are trying to drive a wedge between American black descendants of slaves and black immigrants. …

The real story of #ADOS is, unsurprisingly, more complicated than any of these parties want to acknowledge. The ADOS hashtag was created by attorney Antonio Moore and political commentator Yvette Carnell. Neither of them is a bot, or a Russian. In interviews with the Intercept in the aftermath of the Democratic debate that brought the hashtag to the fore, Moore and Carnell both dismiss criticism like Reid’s as an effort to “undermine authentic Black advocacy in order to prop up the Democratic establishment.” They describe the goals of #ADOS as “agenda politics” rather than identity politics, calling on Democratic candidates to support a “New Deal for Black America,” a set of specific policies designed to address the institutional and systemic plunder that has defined America’s relationship with blackness since its founding. The ADOS policy page details the specific measures the group supports, including reparations for the descendants of people held in chattel slavery, government subsidies for health care and education, and affirmative action for slave descendants.

The ADOS movement, such as it is, is one of many forums in a larger conversation that questions black homogeneity in America. That conversation will only grow louder as the issue of reparations—and who deserves them—continues to gain momentum following a congressional hearing on the subject last month.

But a closer look suggests ADOS is hiding a blackness purity test in rhetoric about who deserves those reparations. As Michael Scherer and Amy B Wang put it in the Washington Post on Monday, “The underlying message is that black Americans from immigrant families, even places like Jamaica, with a history of slavery under Spanish and British rule, do not have the same claim to the identity or the struggle for civil rights.” And there’s troubling evidence that anti-immigrant bias is at the heart of that message.

There’s troubling evidence of anti-immigrant bias at the heart of the message.


On the ADOS policy page, the group stipulates that the census should introduce a new designation for “ADOS and another for Black immigrants. Black immigrants should be barred from accessing affirmative action and other set asides intended for ADOS, as should Asians, Latinos, white women, and other ‘minority’ groups.” According to the same Washington Post report, Carnell, the co-founder, was previously on the board of Progressives for Immigration Reform, which, despite its name, has deep ties to the anti-immigrant right. Moore, for his part, wrote a 2016 HuffPost op-ed arguing that Trump’s hard-line stance on immigration is warranted because undocumented immigrants are to blame for black unemployment. He also likes to suggest that critics of the movement like Reid aren’t qualified to comment on it because they are children of immigrants.

… Rhetoric like that has gained the attention—and support—of several right-wing activists, including Ann Coulter, who tweeted, “I like #ADOS,” and suggested a name change to DOAS, for Descendants of American Slaves.

Beyond ADOS’s more fundamental issues, experts have also raised the alarm at how easily it could be hijacked for other purposes. Malcolm Nance, a counterterrorism and intelligence consultant for the U.S. government, warned on Twitter that “For 5 months a small group of black cyber security experts have been watching a bunch of black Trumpers using #ADOS & warning it was the leading edge of a racist Russian cyber attack on @KamalaHarris. Many bots. Some trolls.”

There are several interesting questions here, such as: Whose priorities get prioritized in the media: American blacks’ or the Democratic Party’s?

The Democrats clearly feel that they are most likely winning elections by having blacks be defined using a racial one-drop test that skips over inconvenient details of Who Sold Whom Into Slavery.

If you just got off the plain from Ghana, you are black and that’s all you are.

If you just got off the plane from Barbados, where your family has been recognized as middle class and mixed race for a century, you are black here and that’s all you are.

If 3 of your 4 grandparents are white, but one of four identifies as black, you are black.

There are multiple reasons for this. One is the talent gap. While African-American culture produces outstanding athletes and entertainers, it’s less good at producing people who seem plausible as President. Thus the first black president, Barack Obama, had no blood connection to anyone ever enslaved in the United States. Nor does Kamala Harris.

Increasingly, black talent (outside of sports and entertainment) in the U.S. is found in post 1865/1965 immigrants, or people with a very recent white ancestor, or some such combination that would lessen their claim to reparations.

When Harvard professors Henry Louis Gates and Lani Guinier pointed out in 2004 that Harvard’s affirmative action system especially privileged people with some claim to be black but less claim to be descendants of American slaves, they soon had to shut up because of the rise that summer of Obama, a hilariously perfect example of their thesis.

Of course, reparations talk is dredging up these questions once again. The Democrats and the media want to have their cake and eat it too. Get blacks excited about reparations while not answering any of the insidious questions they raise.