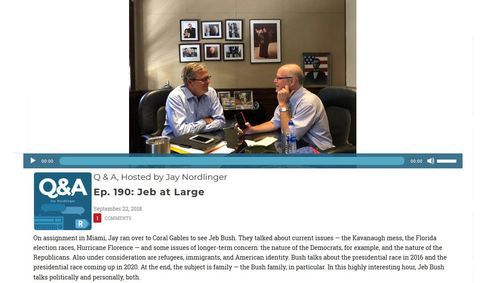 National Review's Jay Nordlinger is the worst writer in America. His agonizingly clunky style is matched only by the superficiality of his political thought [National Review's Wishful Thinking About Race, by Gregory Hood, American Renaissance, June 12, 2018].

His counterpart among politicians is undoubtedly Jeb "Please Clap" Bush. So it is not suprising in a recent interview [MP3] with Nordlinger that Jeb! condemned Americans who don't want to be "changed" by mass immigration.

Our party is advocating restricting legal immigration as well. And I think that’s foolhardy beyond belief. There’s a way to reform the legal immigration system that would be a catalyst for sustained economic growth and we need it because our demography is going the wrong way. [Emphasis added]

There are quite a few people that have a larger megaphone if you will that seem either threatened by what they perceive to be a changing country that is less white perhaps … basically, there’s a concern that we’ve lost our way and immigrants are kind of easy to single out with vitriol. [Emphasis added]

The way Jeb! and other Beltway Right types view demography shows their contempt for the historic American nation. It is appropriate to talk about "demography" when it comes to the need for more workers, i.e. the need to keep down wages via a glut in the labor market. However, if we talk about demography in terms of race, culture, and the effects of different population groups on the electorate, that becomes "vitriol."

What is the point of "conservatism" if it can't resist a fundamental transformation of the country?

Of course, the Left is increasingly open about its desire to replace the historic American nation with a more politically amenable group of voters. Apparently Jeb! has no problem with this, only those who resist it.

What is truly "threatened" by this demographic change is the Republican Party and even the possibility of conservative governance.

But what do Jeb! and Nordlinger care? It was never about accomplishing anything or even preserving the country. As a far superior editor at National Review once said of the conservative movement, "It was all a game, or a way of making a living."