Adapted from the September 29 Radio Derb, available exclusively on VDARE.com

Genuflecting is in the news—football players, mainly black ones, "taking a knee" during pre-game playing of the National Anthem.  The most recent example, from this Sunday: teams kneeling before the anthem, and being booed anyway—NFL fans booed players for kneeling before national anthem and standing for it  | NFL players tried to show support for the cause while not disrespecting the flag, but fans booed anyway, by Taylor Link, Salon.com, October 1, 2017. ] What's up with that?

I can only give a personal take on this—not, I'm aware, a thoroughly American take.

I am an American, a citizen for fifteen years now, and very glad to be one; but I grew up elsewhere, in a monoracial country—England had few blacks, in just a few areas, until I was well into my teens. I came here as an adult, 28 years old. So I don't see the American racial scene the way born Americans see it and grow up with it.

To an outsider like me, one very striking thing about that scene was the deep, hungry yearning among most white Americans to think well of blacks.

After the Civil Rights reforms of the sixties, there was a widespread sentiment that with the injustices of the past set aside, we ought to be able to get to a place where we would be all citizens together, equal under the law and regarding each other in a spirit of equality. It might take a few years (people felt) and need some temporary remedies—Affirmative Action, contract set-asides, and so on—but we should get there, and be a united, reasonably harmonious nation by, oh, the year 2000, for sure.

And as I said, one part of it was a strong wish among whites to think well of blacks. Statistics bore this out. A survey in 1978 asked white Americans to estimate what proportion of black families were headed by a female. The estimates were from eight to twelve percent. The actual figure at the time was 21 percent. White people under-estimated black-white differences. They wanted to. They wanted to think well of blacks.

A lot of that yearning still persists. If you engage with the statistics much, you're struck by how staggeringly big the black-white differences are—bigger than most people are aware, way bigger than estimates you'd get from average white Americans.

Try asking some white acquaintance how much more likely a random black American is to commit homicide, than a random white person. "Heck, I don't know," he'll say, displaying considerable embarrassment at having been forced to think about the matter. "Is there really a difference? What is it, twice as likely?" The actual answer: six times as likely. [The Color Of Crime, New Century Foundation, 2016 (PDF) ]

If you replace "homicide" by "street robbery," the multiplier is thirty times. You wouldn't hear that as an estimate from any white person, though. White Americans just don't want to think that badly of their fellow citizens.

Professional sports play into that yearning. I recall sitting in bars or private homes back in the seventies, when I was new to the States, watching football or basketball on TV. What jumped out at me was the peculiarity, the strangeness, of stadiums filled with mostly white people cheering on teams that were mostly black.

Occasionally I got the chance to talk to other expats like myself. Was it just me, or did they notice that strangeness, too?

Yes, they did. It wasn't just me. That strangeness was a very American thing, a thing foreigners noticed.

The core issue there was patriotism—the American style of patriotism. White Americans love our country. We want to think well of it; we want foreigners to admire it. By the late 1960s, when there was a consensus among white Americans that blacks should have full equality under the law, there was an eagerness to welcome any kind of sign that blacks were doing well.

In professional sports, blacks do do well. So sports fed that yearning to think well of blacks. 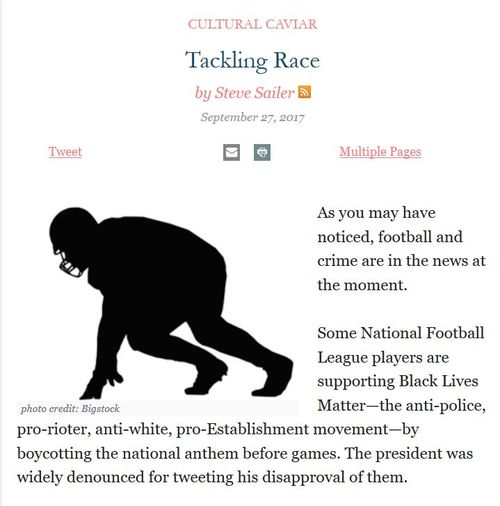 Blacks have come to dominate most positions in football, which reassures white conservatives of the fundamental fairness of American society. It's difficult to believe the conventional wisdom in the press about how racist America is when the NFL is phenomenally popular despite being 68 percent black …

White spectators like to conceive of their team's black players as defending the homeland. The ability of black football players to play as a team on Saturday and Sunday inclines whites to be more optimistic about blacks' potential for pro-social order than might be warranted by what they observe on Monday through Friday.

Reading passages like that, I find myself wondering again, for the umpteenth time, why shallow mediocrities like David Brooks or John Podhoretz have high-paid opinionating slots at major mainstream publications while Steve's material is out beyond the fringes of respectability.

I don't wonder for long, though, because I know the answer. It was spelled out for us a hundred years ago by T.S. Eliot: "Humankind cannot bear very much reality." For broad marketplace appeal, tragic truth doesn't stand a chance against feelgood falsehood.

What about black Americans, though? Those millionaire ball players, disrespecting the flag and the anthem like that—do they love the country?

Some of them, I'm sure, would insist that they do. The more literate ones, if there are any, might quote Senator Schurz at you: "Our country—when right to be kept right; when wrong to be put right."

Those hopes Americans had in the sixties and seventies, that the whole damned wretched race business would just go away under legal equality, came up against reality, and reality won. Unwilling to accept that, white Americans shifted to a different posture, a sort of paternalism.

When China was struggling to come to terms with modernity a hundred years ago, the writer Lu Xun said: "It seems that we Chinese just can't treat foreigners as equals. We either look down on them as coarse, crude barbarians, or else we worship them as masters of science and democracy."

American whites seem to be in some similar relation to blacks. Either blacks are an undeveloped, immature type of humanity, for whom endless excuses have to be made, or they are solemn, grave repositories of wisdom and high spirituality—Magic Negroes. The notion that they are just men and women like ourselves seems to be difficult to keep a firm grip on at any level above the one-on-one. 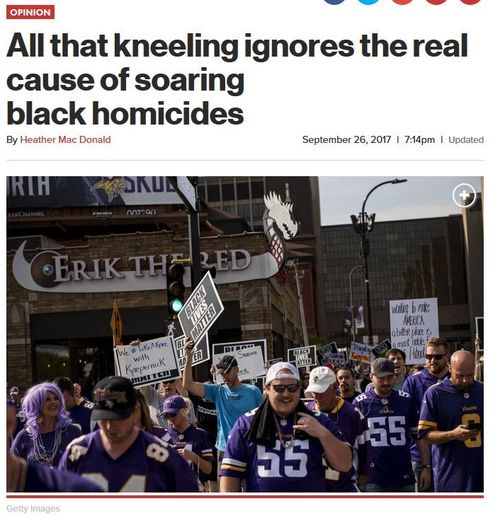 That first option, the paternalistic one, the infantilizing one, is the one we mostly opt for. It's been the one mostly on display in coverage of the genuflecting footballers. They whine, they pout; they pretend they are oppressed, when by any objective standard they are petted and pampered; they sputter about "police brutality," when all the statistics say the opposite thing. From Heather Mac Donald’s analysis of those statistics:

All that kneeling ignores the real cause of soaring black homicides, New York Post, September 26, 2017

They stamp, and pout, and, sputter, and snarl; and white America smiles sadly, shakes its head, and says, "Well, what can you expect, poor things? After all that slavery and discrimination, all that prejudice …"

It is, as I said, like watching clueless parents dealing with spoiled children. They have no agency. They can't help it.

Football may be our national sport; but the national pastime of white Americans, I often think, is making excuses for blacks.

The beginning of wisdom here: race realism. The truth about race is that it's real, and the statistical differences between blacks and other races—in temperament, behavior, intelligence, and personality—are big and intractable.

You don't like to hear "intractable"? Here's a random news story from last week:

Education officials across California released their scores Wednesday, each highlighting what they saw as positive news in the data while lamenting the stubborn, and in some cases widening, achievement gap.

You might think, mightn't you? that after all those "decades of effort and billions of dollars in funding," reality is trying to tell us something.

One of Dr. Johnson's friends had an unhappy marriage. Then the wife died, and the friend remarried. Johnson called this: "The triumph of hope over experience."

The continuing yearning of white Americans to think well of our black compatriots is a triumph of patriotism over experience. The experience is all those futile "decades of effort and billions of dollars in funding." The patriotism is the deep unwillingness to believe that our country, which we love, is fatally, structurally, flawed.

Well, is it? Is a harmonious multiracial society just not possible—beyond the design limits of human nature? Was Abraham Lincoln right when he told the freedmen that,

You and we are different races. We have between us a broader difference than exists between almost any other two races … We suffer on each side. If this is admitted, it affords a reason at least why we should be separated. [Address on Colonization to a Deputation of Negroes , August  14, 1862]

Well, maybe he was and maybe he wasn't. But separation is no more feasible now than it was in 1862. We must struggle on forward as best we can, white and black alike.

I'm happy to give it my best shot, as an American. But I do wish, I so do wish, we could cut out the hypocrisy about "white privilege" and "police brutality," and cut out the futility about "closing the gaps" and "fixing the schools."

That's my formula for an enlightened patriotism: for black and nonblack to face up honestly to reality, to our group differences, which aren't anyone's fault, except Mother Nature's—as citizens united in a common enterprise, with a common collective fate as Americans.

Is it really impossible? I sure hope not.