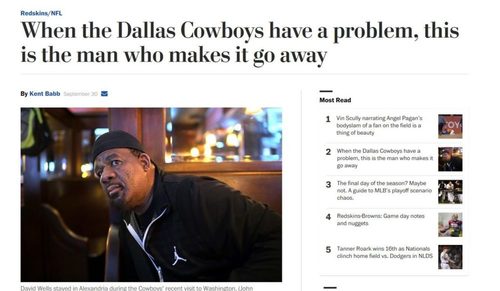 Here’s an interesting 2016 article in the Washington Post by Kent Babb about the NFL Dallas Cowboys’ team fixer. He gets paid by the Cowboys to make drunk driving and domestic violence arrests of Cowboy football players disappear before they get into the newspapers.

“Whenever something is messed up and you need to go outside the lines a little bit,” former Kaufman County, Tex., district attorney Rick Harrison said, “he’s your guy.”

“A tremendous asset to the franchise,” [Cowboys owner] Jerry Jones said. “. . . I won’t get into detail of the kinds of things [Wells does], because he does everything.” …

Said longtime attorney Anthony Lyons: “There are going to be times that David comes up with a result that you’re just not going to ask him about.” …

And here’s a Men’s Journal article by Paul Solotaroff about another fixer for the NFL:

The Woman Who Bails Out the NFL’s Bad Boys