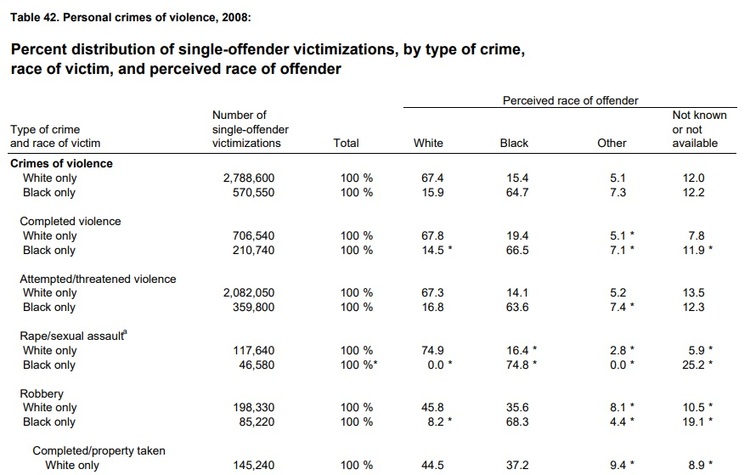 Where Crime Stats Come From

Some listeners to the Alan Colmes radio show on Friday want to know where I get my figures on interracial crime.

From the Department of Justice website, that's where. For purposes of argumentation, the National Crime Victimization Survey (NCVS) is best, as it is compiled only from victim reports, whether or not the police and courts got involved.  Some of the crimes here weren't even reported to the police.  Unfortunately the NCVS excludes homicide. Homicide victims aren't very good at filling out DoJ questionnaires.

You might think the reliance on victims' memory, perceptions, etc. would make the NCVS data dubious, and it has indeed been criticized on those grounds.  (The survey is done twice a year, so a victim might be recalling something that happened six months ago.)

However, the relative numbers you get match up surprisingly well with incident reports and arrest data from law enforcement agencies, which are in a different database, the Uniform Crime Reports (UCR), gathered by a different methodology. I think criminologists believe the NCVS is reliable.  The UCR, by the way, has the homicide numbers, with additional data, e.g. on race, in the Supplementary Homicide Report.

Finding your way around the NCVS database is not easy. I find myself wondering whether it's made deliberately not easy.  The "analysis tools" are largely useless.  With the help of some secondary googling, though, you can find what you want.

Here for example is a key page:  the statistical tables.  If you scroll down to "Victims and Offenders" and pull up the latest Acrobat file (2008 when I just did it), you get this.

Table 42, "Percent distribution of single-offender victimizations, by type of crime, race of victim, and perceived race of offender" is worth a visit.

Looking at "Robbery" on that table, for instance (defined as "Completed or attempted theft, directly from a person, of property or cash by force or threat of force, with or without a weapon, and with or without injury"), we see that there were 198,330 white victims of robbery in this category for 2008.  In 10.5 percent of these white-victim cases, i.e. 20,825 incidents, the race of the offender was not known. In 35.6 percent of cases, which is 70,605 robberies, the offender was identified as black.

Thus, setting aside the not-knowns, black-on-white robbery occurred at a tad more than ten times the frequency of white-on-black (70,605 divided by 6,988 equals 10.1).  One-eighth of the population is robbing (single-offender) the other seven-eighths at ten times the converse.

Taking single-offender interracial (black-white) crimes of violence as a whole, therefore, we have total 520,161, of which 83 percent were black-on-white.

That's an easy-to-remember take-home.  Exact numbers vary year to year, but of single-offender interracial (black-white) crimes of violence, excluding homicide, 80 to 85 percent have a black perp.  That's according to victims; the police didn't necessarily show up.

So those black journalists I started out my infamous April 5 column with, taking their kids aside for "The Talk" to warn them about the evil whites lurking in the street shadows waiting to do violence on them, were missing a rather large point.  As indeed was Michelle Obama when she told 60 Minutes back in 2007 that: "As a black man, Barack can get shot going to the gas station."