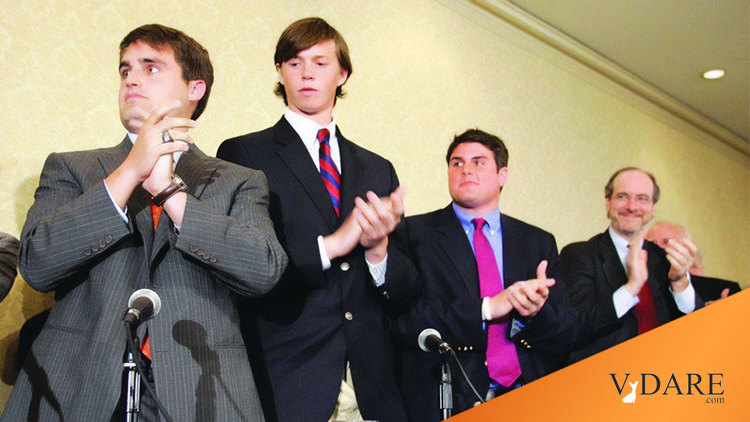 Although few fans follow the old American Indian sport of lacrosse, because of the current "rape" scandal the Duke lacrosse team is now one of the most publicized team in America, with 24,000,000 Google hits, a 30 percent margin over the New York Yankees.

Simultaneously, the MSM is totally uninterested in the not one but three minority football heroes who got in trouble with the law (one assault, two rapes) just in the last week.

The only justice so far in the Duke travesty:  America's greatest living writer, Tom Wolfe, is getting his deserved due. Many commentators have noted the parallels between the lacrosse brouhaha and Wolfe's (originally much-denounced) 2004 novel I Am Charlotte Simmons.

It is set at fictional Dupont University, Wolfe's version of Duke U., and the lacrosse players represented the ultimate in arrogant preppy machismo.

Yet almost nobody in the press has admitted that the Duke farce—in which Mike Nifong, a politically-pressed white district attorney in a heavily minority district, has arrested two white lacrosse players for purportedly raping a black stripper, despite ample evidence suggesting the strong possibility of a hoax—is even more brilliantly foreshadowed in the central theme of Wolfe's famous 1987 bestseller The Bonfire of the Vanities.

Bonfire: In Wolfe's classic, the Bronx District Attorney Abe Weiss "was notorious in his obsession for publicity, even among a breed, the district attorney, that was publicity-mad by nature."

Duke: The Durham D.A. did nonstop interviews to publicize the Duke case initially, although he has clammed up since the DNA tests that were supposed to prove a rape had actually been committed came back negative.

Bonfire: Weiss is known to his underlings as "Captain Ahab" for his pursuit of the "Great White Defendant." The D.A. finds the perfect Great White Defendant in Sherman McCoy, a rich, pompous, adulterous WASP bond trader, whom he charges with running over an innocent black ghetto youth with his Mercedes. McCoy is Central Casting's dream candidate for the role of GWD. The only minor flaw is that McCoy is not, actually, guilty. But a little thing like his innocence doesn't stop the DA's office and the New York media from ruining his life.

Duke: On the Duke Lacrosse team, 46 of the 47 players are white. Worse, many come from WASP prep schools.

Why was the Bronx D.A. fixated on finding the almost-mythical Great White Defendant?

"Weiss had an election coming up, and the Bronx was 70 percent black and Latin, and he was going to make sure the name Abe Weiss was pumped out to them on every channel that existed. He might not do much else, but he was going to do that."

"Every assistant D.A. in the Bronx … shared Captain Ahab's mania for the Great White Defendant. For a start, it was not pleasant to go through life telling yourself, "What I do for a living is, I pack blacks and Latins off to jail."… It was that it was in bad taste. So it made the boys uneasy, this eternal prosecution of the blacks and Latins."

Wolfe, America's leading expert on contemporary status wars, observes that nobody wants to be suspected of political incorrectness because:

"These days the thing about bigotry was it was undignified. It was a sign of Low Rent origins, of inferior social status, of poor taste."

In New York state, blacks are imprisoned at a rate 11.9 times as often as non-Hispanic whites, according to a new analysis based on 2000 Census data by the pseudonymous statistician La Griffe du Lion.

Duke: As is common in more politically conservative states, the black-white incarceration ratio is lower in North Carolina at 7.2 times, but it is still huge. As every careful student of American crime patterns has discovered, racial bias in the criminal justice system does not play an important role in causing these radical racial disparities. Wolfe points out:

"Not that [the overwhelmingly black and Latin defendants] weren't guilty. One thing [Larry] Kramer had learned within two weeks as an assistant D.A. in the Bronx was that 95 percent of the defendants who got as far as the indictment stage, perhaps 98 percent, were truly guilty. The caseload was so overwhelming that you didn't waste time trying to bring the marginal cases forward, unless the press was on your back. They hauled in guilt by the ton...

Bonfire: Third, persecuting a Great White Defendant provides a vacation from the depressing day-to-day routine of prosecutors: "the shoveling of the chow into the gullet of the criminal justice system." Wolfe explains that unlike on TV, prosecutors are not normally engaged in a battle of wits with criminal masterminds:

"But the poor bastards behind the wire mesh barely deserved the term criminal, if by criminal you had in mind the romantic notion of someone who has a goal and seeks to achieve it through some desperate way outside the law. No, they were simpleminded incompetents, most of them, and they did unbelievably stupid, vile things."

Duke: The prosecutor seems likely to get all the legal challenge he wants, because wealthy parents of Duke players are hiring expensive defense attorneys, including Bill Clinton's lawyer Bob Bennett.

Bonfire: Fourth, prosecuting minorities is a thankless job, one the press takes almost no interest in, which is galling to ambitious D.A.s:

"The press couldn't even see these cases. It was just poor people killing poor people. To prosecute such cases was to be part of the garbage collection service, necessary and honorable, plodding and anonymous."

Duke: The New York Times, which seldom deigns to notice crimes committed in New York City, has given this distant case a couple of dozen articles.

The press' lack of interest in minority violence is even more true of movies and television shows.

Three years after Bonfire, TV producer Dick Wolf took Tom Wolfe's basic procedural framework of detectives and district attorneys and turned it into the television drama Law & Order. Its first few seasons were among the best and most realistic in the history of television.

The only problem was that ratings were lousy. Sure, at the time, New York City was in the middle of hideous gang wars among black and Latin crack dealers, with 4,298 human beings murdered within the city limits in 1990 and 1991 (an annual toll about three times higher than the average during the current Iraq war).

Unfortunately for TV producers with aspirations toward realism, less than ten percent of the NYC victims, and even fewer of their murderers, were white. The white television audience found that L&O's initial set of heavily minority murderers boring and depressing. What white people like are stories about bad white people, especially, snooty bad white people, to whom they can feel morally and culturally superior. Whites just don't really see minorities as competing with them in the Great American Status Game.

So, Dick Wolf turned Law & Order into exactly what Tom Wolfe had satirized: a hunt for the Great White Defendant. That helped make it the most successful franchise in television history. Today, sixteen years later, the original L&O is the longest running drama on network television, and three spin-offs are also airing. Several times a week, heroic New York District Attorneys prosecute Great White Defendants for the diabolical murders they have perpetrated in their Park Avenue lairs.

Indeed, it's possible that more murders are committed annually by fictional Great White Defendants on the L&O shows than by real whites in all of New York City. From 2003 through 2005, there have only been an average of 27 homicides per year in Manhattan south of Harlem, where most L&O episodes are set, or about six percent of all murders in New York City.

You might think that the news media might have noticed that Law & Order has become a very silly show. But that would require the press mentioning that blacks and Hispanics commit more violent crimes per capita than whites do, which, as Wolfe points out, would be in the worst possible taste.

And here's the kicker:

Just in the last week, three prominent minority football players have been arrested on felony charges.

Yet none of these cases have received a fraction of the attention that the Duke Lacrosse team has garnered—even though football is the most popular sport in America and lacrosse is close to the most unpopular.

Why not? Well, the press likes Man-Bites-Dog stories ripped from the commercials for Law & Order.

According to the Color of Crime 2005 report, in the FBI's annual National Crime Victims Survey, none of the approximately 10,000 black women surveyed from 2001 to 2003 reported being victims of a white gang rape. In contrast, black-on-white gang rape is, apparently according to the NCVS, a much more than daily occurrence in this country (although small sample sizes for gang-rapes make it hard to be definitive about the size of the ratios).

White-on-black single rapist crime, while not unknown, averages only 900 cases per year according to the FBI survey of victims.

In contrast, there are 15,400 black-on-white single rapist crimes per year, according to the NCVS.

Blacks and Hispanics committing violent crimes against whites are Dog-Bites-Man stories to the press, tedious and unseemly. We've heard it all before.

And some college boys' lives will be ruined.