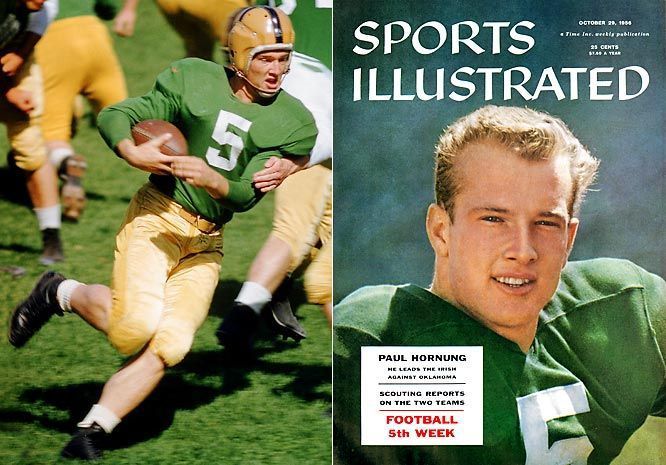 I've seen it a thousand times. But I'm still bemused that modern sportswriters form lynch mobs whenever sports heroes commit the unforgivable sin of not being boring about race.

Last week, Hornung lost his job broadcasting Notre Dame games for saying back in March that, because the Fighting Irish have some of the strictest academic entrance standards for football players in the country, they are routinely beaten by the speedsters at anything-goes colleges like U. of Miami.

“Hornung's remarks were an insult to every athlete—black and white—who ever played for the university, earned a degree and added to its football legend.” “Hornung Has Failed to Meet Standard of Common Sense: April 1, 2004, Free version]

Nooooo! Calling for lower standards in the future in order to widen the pool of athletes eligible to be admitted to Notre Dame is a compliment to black grads of the past. As we now know, they were (mostly) admitted and earned a degree under higher standards than those of most colleges.

The fact that the white-black gap in average SAT score is 206 points (see page 11 of this 820k College Board [PDF]) causes all sorts of fascinating problems for universities that have both high standards in the classroom and high hopes on the football field. But the gridiron scribes don't want you to hear about them.

(You can read all my comments on the Hornung brouhaha here, including the inside story on how the Fighting Irish's last national championship was won back in 1988 by temporarily lowering admissions standards to get top black athletes like quarterback Tony Rice.)

More recently, sportswriters turned their mindless rage on the great Larry Bird for his crime of telling the truth. Bird said:

He's right, of course. I covered this issue in depth in one of my best National Review articles way back in 1996: “Great Black Hopes.” As you can tell just by noticing the greater average muscle definition of black athletes, there are genetic differences between the races that give blacks, on average, more explosive muscularity of the kind that basketball, football, and sprinting particularly require.

“Do broadcasters and beat reporters need a 'dump' button for raving sports icons, too? Didn't … Bird hear? The anything-goes entertainment culture of insensitivity is out. Self-censorship is in… Bird's offensive lapse was out of ignorance…”

Hmmm. What would H.L. Mencken say about newspaper reporters who vilify the rare honest source who doesn't just give them same the old soft soap?

A common theme in sportswriters' complaints last week was that Bird, who has been a successful NBA coach and is now the president of the Indiana Pacers franchise, is a poor white trash inbred retard straight out of the movie Deliverance.

Sports columnists, in contrast, all have doctorates in behavioral genetics.

Thus Mike Vaccaro in the New York Post hyperventilated about “logic-challenged hayseeds like Larry Bird espousing his own strange brand of sociology.”

Other outlets printed stories entitled “Bird's comments leave us at a loss,” “When it comes to race, best to shut up,” and “Bird comes off looking like bigot.”

But the truth is anything Mr. Bird says about basketball deserves respectful analysis. Let's take it from the top:

The NY Times' Selena Roberts cites the popularity of 7'-5″ Yao Ming as an example of how fans are completely colorblind. But of course Yao's advertising appeal isn't based on his performance (he's a fine young player who may well mature into a mainstay of the league, although he's not there yet). It's the fact that he's a really tall Chinese guy.

The NBA front office loves Yao because a billion ethnocentric Chinese people love Yao. That translates into all sorts of NBA-licensed crud they can sell to the China market (although Red China's penchant for intellectual property theft might put a dent in their sales forecasts).

Similarity, the NBA's popularity in other countries is fueled by an increase in the number of foreign players making it in the NBA.

White Americans are hugely less ethnocentric than the Chinese. Indeed, they are probably the most colorblind people on Earth (although that's not necessarily saying much).  But they aren't completely lacking in normal human feelings.

White Americans only make up about 12% of the NBA. African-Americans are 77%. Worse, following the retirement of the great point guard John Stockton, white Americans supply almost none of the stars. The only white American to play in the All Star Game the last two seasons has been Brad Miller, hardly a household name. The closest thing to a charismatic white American star is Canadian Steve Nash.

Some of the fun of being a sports fan is dreaming that somebody personally connected to you—your cousin's hotshot young nephew, or whoever—might someday make it big. Indeed, one reason African-Americans are such fanatical NBA fans is because so many of them really do have some kind of semi-intimate connection to a basketball star. But, if you are a white American, that seems more and more like a pipe dream.

For example, during my youth I knew about a dozen kids who went on to play minor league baseball, about three who made it to the majors, and one who earned the Cy Young Award.

But I've never known anyone who became an NBA player. I doubt I ever will.

Larry Bird was the classic example of “White Men Can't Jump.” But that didn't stop him –because he didn't try to play the black aerial game.

Or perhaps white parents are keeping their sons away from basketball because of its players' (deserved) reputation for thuggishness. Witness the new book Out of Bounds: Inside the NBA's Culture of Rape, Violence, and Crime by Jeff Benedict. The blurb's startling summary

“Based on a first-of-its-kind investigation into the criminal histories of 177 NBA players from the 2001–2002 seasons, Out of Bounds shows that an alarming four out of every ten NBA players have a police record involving a serious crime.”

Plus, when Bird revealed, “I just didn't want a white guy guarding me, because it's disrespect to my game,” I suspect he was thinking more about the end of his career than the beginning. It was certainly no sign of disrespect in 1979 when the 76ers assigned to him the Great White Defender Bobby Jones, who made the first team of the NBA's All-Defensive squad eight years in a row, from 1977 through 1984. Up through that era, whites were typically seen as tending to be the more tenacious defenders. Blacks were seen as the greater offensive threats, but as frequent slackers on defense.

Former Celtics superstar Charles Barkley joked about Bird's comments: “I'll tell you what was really funny was . . . we always thought it was an insult when they put [Bird] on one of us, because he was the worst defensive player ever.” But in fact, Bird made the second team of top defenders three times early in his career.

But no white has been named to the All NBA Defensive First Team since Mark Eaton in 1989 (unless you want to count mulattos Jason Kidd and Doug Christie as more white than black). As recently as '77 and '78, whites made up a majority of the first team (Jones, Bill Walton, and Don Buse in both years).

Something good happened, though, to make defense fashionable among blacks–perhaps it was the John Thompson-Pat Ewing teams at Georgetown U. in the early 1980s. The huge improvement in black defensive play greatly raised the overall quality of NBA games over that seen in the mediocre Seventies.

But eventually the trend went too far. Blacks stopped practicing their shooting skills in favor of nonstop scrimmaging, so free throw and field goal percentages plummeted. Thus you see car crash games like the last of the Eastern Conference Finals, where neither team scored 70 points.

You only get good at defense by playing against others. You only get good at shooting by practicing by yourself. Of course, whites tend to have more driveways where they can perfect their shooting mechanics, but there are personality differences as well that push the races in different directions. Blacks tend to be more gregarious and thus prefer playing games to working out alone, while more whites are loners.

Unfortunately, the utter triumph of black basketball culture has damaged the game over the last decade. It has pushed it too far toward a contest of full-body athleticism, at which blacks dominate, rather than of hand-eye coordination, at which the races are more equal—with Bird being the all-time Grand Master.

Worse, the post-Michael Jordan generation of black players grew up listening to gangsta rap, which consists in large measure of young black men boasting how they have murdered other young black men who didn't subordinate themselves to them. (If you have a strong stomach, check out the lyrics to, for example, NWA's epochal “Straight Outta Compton.”) Not surprisingly, this kind of culture is not conducive to strong team play on offense.

Off the court, much of the news consists of self-destructive Kobe-and-Shaq-style bickering between teammates over who should get the ball the most and who is The Man on the team.

This has provided an opening for European whites, who like to work on their shooting and don't mind playing as a team.

This lead to the ultimate question:

Major League Baseball is trying to lure black youths back to baseball with the RBI program (“Reviving Baseball in the Inner City”). The NBA should at least begin a national conversation about why there are so few top white American players.

Because you can't understand basketball today without thinking about race.