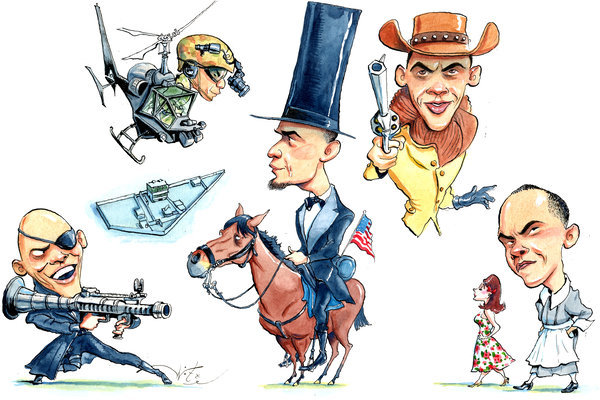 The Technical Name For That Is "Propaganda": Movies in the Age of Obama

As an example of Obamalatry, this New York Times graphic is comical—apparently every movie made is about Obama. There he is as the white Lincoln, a white Special Forces pilot, taking down Osama bin Laden himself, instead of by remote control, as the black gunman Django, and as Nick Fury, who was a white guy in World War II, but in modern movies is played by Samuel L. Jackson. (I have no idea who he is when he's got his apron on.) 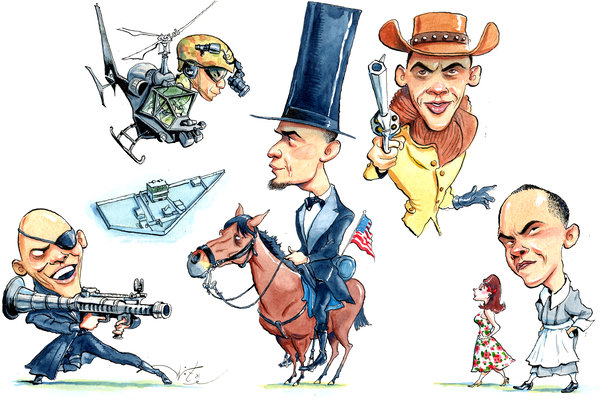 Movies in the Age of Obama

By A. O. SCOTT and MANOHLA DARGIS

FOUR years ago, on the historic occasion of Barack Obama’s first inauguration, we took a look at the good, bad and outrageous movie characters who helped make his election possible. The road to the White House, we wrote, hadn’t just been paved by Mr. Obama’s speeches, innovative campaign strategies and the hopefulness of a majority of voters, but also by decades of African-American men in movies. From the class striving of Sidney Poitier’s everyman in the classic film “A Raisin in the Sun” to Will Smith’s messianic loners in recent titles like “I Am Legend,” the movies have ennobled, consecrated, glorified, immortalized and, most important, normalized the figure of the black man. [More—actually, a lot more. Links in original.]

Yes, all of that is true—in the movies. In real life,the technical name for it is "propaganda." See Richard Brookhiser's essay The Numinous Negro His importance in our lives; why he is fading. Published in the August 20, 2001, issue of National Review, and republished April 27, 2007.

Brookhiser's "why he is fading" proved to be non-prescient. He was elected President again, and is now giving his Second Inaugural address.