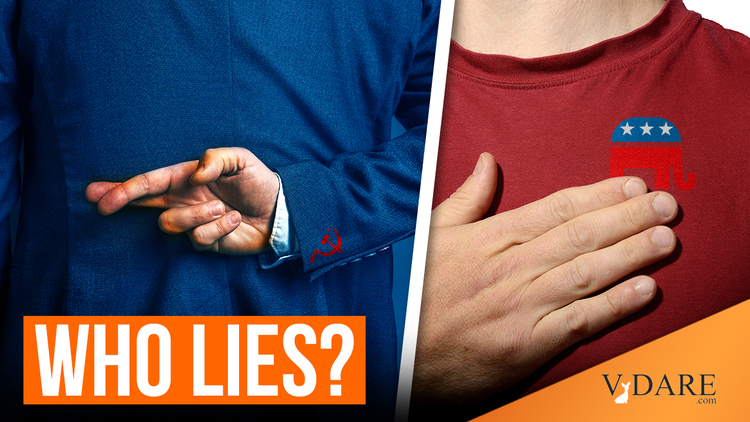 With a few glaring exceptions, such as the late James Flynn, leftists are systematically less interested in the truth than conservatives. Or to put it more bluntly, they lie more often. Thus a major research project has shown that, when findings in psychology have proven fraudulent, the findings almost always support leftist ideology.

Leftists lie for myriad reasons. One is that they are systematically more mentally unbalanced than conservatives. High in Machiavellianism and vulnerable Narcissism, they crave status and adoration to deal with their feelings of low self-esteem, powerlessness and high mental instability. Those feelings cause them to fear a fair fight, and they therefore seek power covertly by virtue signalling about such matters as “equality.” This is particularly true for women: Over half of young, female leftists suffer anxiety or depression.

An example of their dishonesty: the way in which their actions speak louder than their words. “I think all races have equal intelligence,” a leftist will say in denying average IQ differences between whites, blacks, and Asians. But he will then speak to blacks more simply than to whites, implying that he believes black people are less intelligent. See Self-Presentation in Interracial Settings: The Competence Downshift by White Liberals, by Cydney H. Dupree and Susan T. Fiske, psyarxiv.com, September 7, 2018.

In contrast, conservatives will say “treat everyone equally” and so speak to blacks and whites in exactly the same fashion, regardless of perceived intelligence differences.

Another example: Despite their oft-stated affection for minorities, wealthy leftists are often like Bill and Hillary Clinton, who live in overwhelmingly white Chappaqua, New York. A university education gave them all the right attitudes about minorities, as Joe Sobran quipped, and the money and means to move as far away from them as possible

The point is, leftists score higher on the “lie scale” than conservatives. They are more inclined to lie, especially to present themselves in a positive light [Corrigendum to “The nature of the relationship between personality traits and political attitudes [Personal. Individ. Differ. 49 (2010): 306–316), by B. Verhulst et al., Personality and Individual Differences, September 2016].

So we shouldn’t be surprised to find that when an academic assembles research findings in psychology that do not replicate—often due to initial data manipulation and other dishonest techniques—they turn out overwhelmingly to be studies that purport to prove left-wing ideas.

The University of Bristol’s Gavin Leech’s ongoing “Reversals in Psychology” project has found precisely this trend, although it fails to focus on this leftist-conservative difference. For helping with the project, Leech thanks such psychologists as Stuart Ritchie of Edinburgh University, who virtue-signals with a Ukraine flag in his Twitter bio and has blocked me for some reason.

But rather than speculate on Leech’s motives, let’s have a look at some of his noteworthy findings:

However, for me the most interesting finding: the political skew to fraudulent, poor-quality, or otherwise unreplicable research.

As far as I can tell, Leech’s project highlights 23 instances of research that is either highly environmentalist, or substantiates left-wing ideas that do not replicate or for which there is, at best, “very weak evidence.”

By contrast, the project highlights 11 cases of such questionable research in evolutionary psychology or research that appear to substantiate conservative perspectives, including studies on the possible existence of a spiritual world. (A number of the studies, such as those with regard to the influence of brain hemispheres, led to neither leftist nor conservative results}.

So, if we’re being generous to leftist researchers, then their research is three times more unreliable than research that leads to conservative findings.

But what if we’re simply fair?

The 23 leftist research findings include the case of Dutch social psychologist Diederik Stapel, who has so far retracted an astonishing 58 fraudulent studies. Stapel deliberately concocted data, including such findings as people who eat meat being more selfish and that being exposed to litter, or an abandoned bicycle, promotes stereotyping:

The 23 leftist examples also include studies by Brian Wansink, formerly of Cornell University, no less than 50 of whose studies contain “fatal errors” due to the “gross malpractice” of manipulating data.

In terms of “conservative” research, studies by the German-British psychologist Hans Eysenck have invited 26 “expressions of concern.” These include “the validity of the datasets, including the ‘recruitment of participants, administration of measures, reliability of outcome ascertainment, biases in data collection, absence of relevant covariates, and selection of cases analysed in each article’” [Expression of concern: Articles by Hans J. Eysenck, Journal of the Royal Society of Medicine, 2020]. A number of Eysenck’s papers have been retracted due to these “expressions of concern” [Retraction Notice, Perceptual and Motor Skills, 2020].

But an “expression of concern” is not proof of fraud or malpractice and Eysenck can’t defend himself because he died in 1997.

But even so, we can now say that 78 percent of the instances of fraudulent, manipulated and otherwise poor research led to results that are in line with leftist ideas. If we dismiss the “expressions of concern,” as justice to Eysenck demands we must—then 92 percent of the cases of bad research involve leftist findings.

Put simply, fraudulent, manipulated research is overwhelmingly conducted by leftists. These results, as I have discussed before, suggest that universities—now dominated by leftists—are no longer interested in the pursuit of objective truth, but instead are more interested in enforcing dogmatic compliance with leftist ideology.

Leftists are liars and if they take over universities, then research by academics can be expected to be lies. And this is exactly what’s happened.

Students who pay hefty tuition will be increasingly subjected to lectures and material that are nothing but leftist lies. Which is another reason why we can expect the College Bubble to burst.