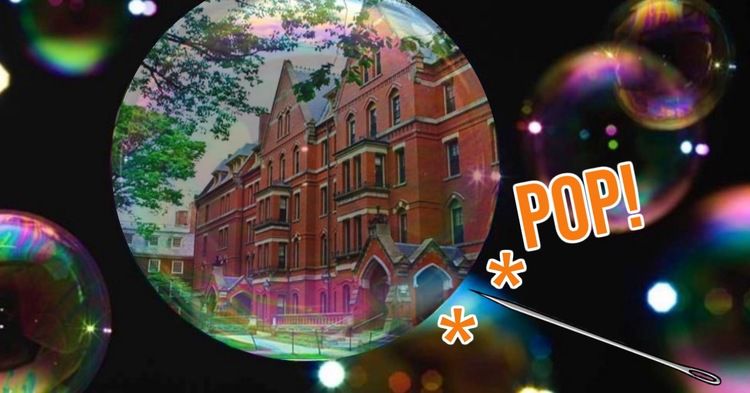 The college bubble is bursting. Bubbles can’t last forever and in the Anglosphere this particular bubble has lasted since the nineteenth century. But universities, even the hard sciences, have now been debauched by anti-science Social Justice Warriors, as I’ve documented here, here,  and here. At the same time, universities have lost their monopoly on knowledge storage, general education provision, and specialized training for high salary professions. And they just cost too much. They’re done.

John Derbyshire has pointed out that in Medieval England the monasteries were similarly all-powerful as knowledge repositories, book-producers, even homes of proto-science. And they were similarly expensive—the Reformation was in some ways a tax revolt. But a combination of competition (from the printing-press and from nascent universities) and politics (they opposed Henry VIII’s establishment of the Church of England) led to their dissolution in 1536.

So the monastic bubble burst. Now it’s time for the university bubble to burst too.

Plato founded the “Academy” in Athens in 387 BC. The ideas of the “Platonic Academy”—unfettered free inquiry in the pursuit of truth—inspired nineteenth century universities so much that they started to speak of universities as “academia.”

But a key problem with the Left is that they are, like Plato, essentialists. They assume that we live in a world of fixed forms.

Thus they demand that more “minority” or poorer pupils be allowed into “elite universities.” They fail to understand that, if this happens, “elite people” will just send their children to university somewhere else and the original university will cease to be regarded as “elite.”

They insist that more and more dropouts enter “higher education” in order to “earn more money.” But they fail to understand that this simply results in the dumbing down of higher education, the bachelor’s degree having far less value as employers lose faith in its value.

The proportion of the university-age students attending universities has risen from, for example, 13% in Britain in 1991 to 50% today, meaning that the degree is nowhere close to gold standard it once was. [“We will beat Germany!” Tory Williamson unveils plot to supercharge British education, By Macer Hall, Express, October 1, 2019]

Already, employers are increasingly setting up their own systems of assessment, sometimes giving the job to a non-graduate. They are bypassing degrees and reverting to de facto apprenticeships, where they establish their own entry requirements and then train you on the job. Surveys have found that employers regard young college graduates as “deficient in such key workplace skills as written and oral communication, critical thinking and analytical reasoning”—the very things that college was supposed to teach them. [This is the real reason why new graduates can’t get hired, By Ronald Alsop, BBC, 19th November 2015,]. 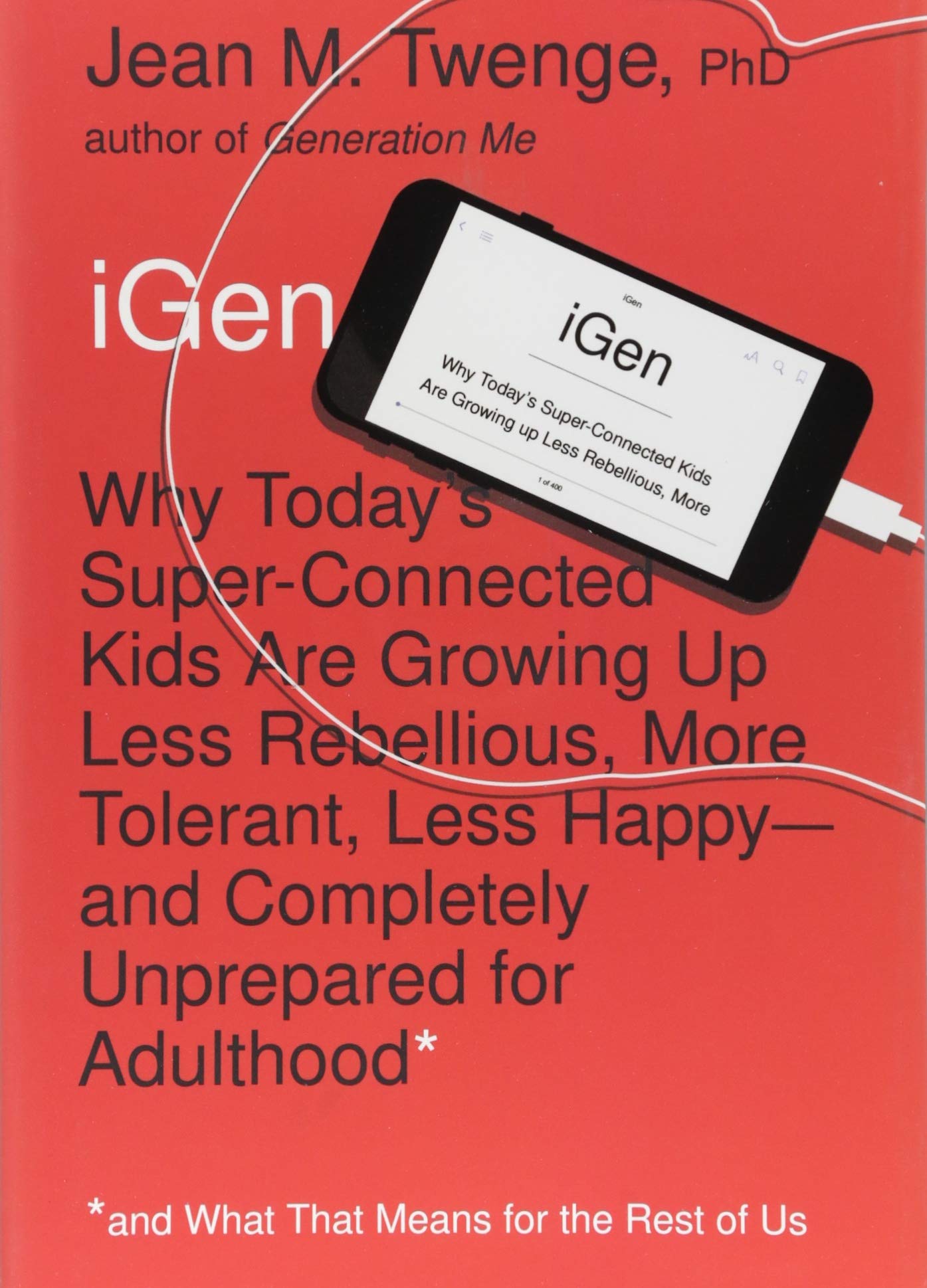 Hence they want to feel intellectually “safe,” “protected” from ideas that upset them and to enjoy the right not to be “offended.”

The faculty increasingly agrees—and, even if they don’t, they censor their teaching accordingly, to avoid bad student reports and their “Adjunct” contract not being renewed [iGen: Why Today's Super-Connected Kids Are Growing Up Less Rebellious, More Tolerant, Less Happy—and Completely Unprepared for Adulthood—and What That Means for the Rest of Us,  by Jennifer Twenge, 2017].

The plain fact is that many high school students would be better off training as an electrician, where there are many jobs available, than saddling themselves with huge student debt to obtain a science degree from a mediocre university.

And it is simply frivolous to study for a Humanities degree—except for the fact that benighted employers still require a college degree. (For example, it’s very difficult to become a U.S. Army officer without one.)

But more and more companies that used to require a degree for certain administrative jobs no longer require one, including Whole Foods and Starbucks [The Higher Education Bubble is Bursting, Investors Business Daily, September 7, 2018].

Already the massive expansion in universities since the 1960s is contracting. Smaller colleges are simply closing their doors, unable to fill their places and thus unable to stay afloat [Expert predicts 25 percent of colleges will “fail” over next two decades, by Jennifer Kabbany, College Fix, September 2, 2019].

In addition, of course, universities have been taken over by the Left. In Britain in 1964, 55% of academics were “Left wing.” This has now risen to 80%, even higher in Humanities subjects. But half of the British public identify as “right wing” compared to less than 12% of academics—despite roughly half of the most intelligent 5% of the population being “right wing” [Lackademia, by Noah Carl, Adam Smith Institute, 2016].

As a result, the public perception is that that academics are biased, their research is not to be trusted, and they shouldn’t be funded by taxpayer money or be permitted charity status. In 2006, 41% of Americans had “a lot of confidence in higher education.” But by 2017 this was down to 14% [(Dis)trust in Science, by Gleb Tsipursky, July 5, 2018, Scientific American].

“Academic mobbing”—in which fanatical Leftist academics destroy colleagues whose research challenges Leftist dogmas—inevitably further undermines confidence. Thus earlier this year, Cambridge University, a highly prestigious institution, fired Dr. Noah Carl because the PC Enforcers objected to his research, which related to race, and to those with whom he’d collaborated to do his research [Why I’m fighting back against the academic mob killing free speeches (sic.) on our campuses, by Jack Ryan and Noah Carl, Mail Online, September 29, 2019].

This also means that universities can be regarded as the ideological enemies of conservative governments. Eventually such governments might begin to ask—apart, that is, from their stupidity and cowardice—why not simply abolish universities’ tax breaks and partial public funding and let them sink or swim? 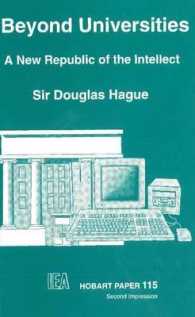 And then there’s the technology-driven competition these increasingly woke and expensive universities must face. This was predicted by British economist Sir Douglas Hague (1926-2015) in an amazingly prescient 1991 paper Beyond Universities: A New Republic of the Intellect [PDF]. (See Peter Brimelow’s 1993 Forbes Magazine interview with Hague.)

Hague pointed out that universities essentially had a monopoly: Students attended university for the purposes of education and attendant kudos (Humanities), training (Sciences and Law) and a combination of the two (Social Science).

But technology means that universities were increasingly redundant. Hague predicted that it would be increasingly easy to “educate yourself” in any subject.

In addition, what Hague called the “freelance fringe” of academia—who would hang around university towns and do occasional university tutoring in addition to other work, such as journalism—have become increasingly prominent (more so now as a result of the internet). Young people, many of them university students, are increasingly aware of Political Correctness at their universities So they turn to quasi-academic, often YouTube personalities who become their de facto teachers—in a sense, academic buskers—and help to fund these people to be independent researchers, while also learning from them.

Due to this competition, Hague expected non-science subjects, in particular, to contract. As with any bubble, the central issue is confidence. Once key people, often those who are more intelligent or perceptive, start to lose confidence, then their lack of confidence is contagious.

It is probable that this very process is occurring, consistent with media speculation on the Higher Ed bubble bursting, right now.

In Britain, for example, as Oxford and Cambridge become increasingly woke and socially engineered [Oxford University agrees to let in disadvantaged students with lower grades, by Gabriela Swerling, Telegraph, May 21, 2019], British pupils from elite backgrounds are increasingly going to colleges abroad, especially in the U.S.A. Between 2013 and 2017, British applications to U.S. colleges increased by 31%. In 2016, half of students at two leading “public schools” (prestigious private schools in British English) applied to an American university and almost half of these applicants ended up going to one [Why British students are heading to America for an elite education, by Helen Kirwan-Taylor, Telegraph, September 27, 2017].

Additionally, British students are rejecting woke and expensive U.K. universities for institutions in mainland Europe, including in Eastern Europe, where much teaching is in English and fees are low [Who needs Oxbridge? Meet the British students headed for Europe, by Rosie Ifould, Guardian, October 3, 2015].

Interestingly, this is what happened when, between 1662 and 1871, you had to be Anglican to attend English universities. As a result, Catholics sent their children abroad, and Non-Conformists set up their own institutions or sent their children to Scotland.

And if British students don’t want to attend U.K. universities, why should non-EU postgrads who are British higher education’s cash cow continue to pay their incredible stratospheric fees? [British universities are whipping up a mad boom that’s bound to go bust, by Mary Dejevsky, Spectator, May 14, 2016].

The college bubble is bursting—and the Left is about to lose one of its key advantages in Anglosphere politics.