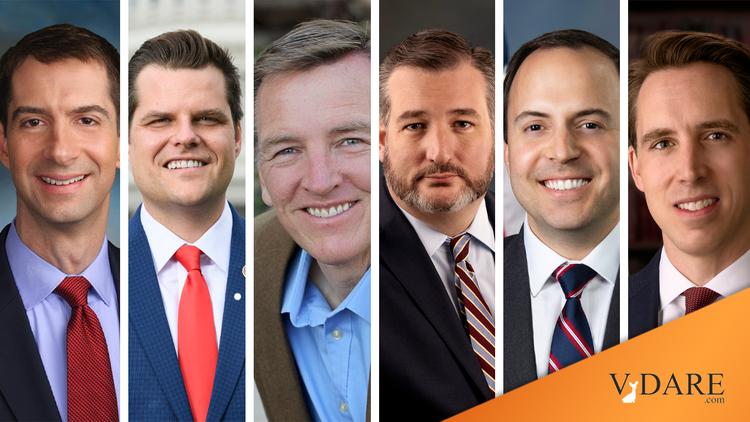 Immigration Patriotism In Congress: Who's On Next?

Kris Kobach’s defeat in the Kansas Senate primary was a brutal blow to the cause of immigration patriotism and a stealth triumph for Conservatism Inc., which had already taken out Iowa’s Rep. Steve King and immigration hero Jeff Sessions of Alabama. And of course, it’s appalling that  President Donald J. Trump is making no effort to institutionalize the National Conservative impulse that brought him to power. But that impulse continues, and new leaders are emerging in Congress.

Even hostile observers concede that President Trump’s nationalist campaign has remade the party. The New York Times neocon David Brooks, perhaps the most Establishment of any professional token “conservative,” says

The basic Trump worldview — on immigration, trade, foreign policy, etc. — will shape the G.O.P. for decades, the way the basic Reagan worldview did for decades. A thousand smarter conservatives will be building a new party after 2020, but one that builds from the framework Trump established.

Other recent surveys report that most Republicans are nationalists on immigration; one found that 74 percent of Republicans believe immigrants are a burden, and not, as the GOP’s Treason Lobby asserts, an asset. 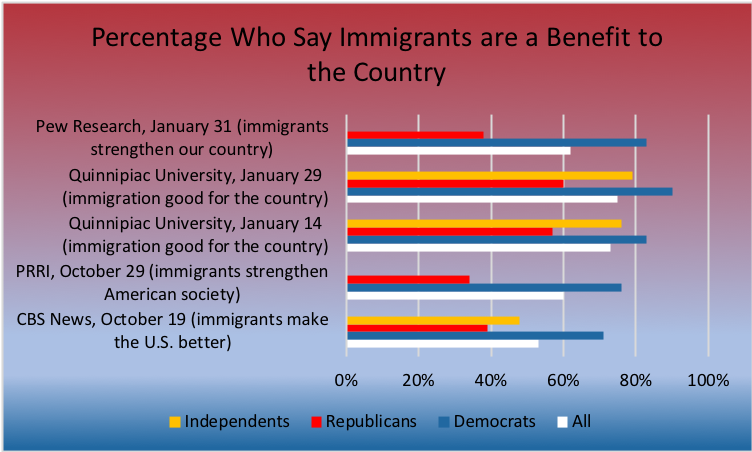 Two further factors are Fox’s Tucker Carlson — and Trump himself.

Carlson is an unapologetic immigration patriot. The Congressional GOP often takes its cues from talk radio and Fox News. If Tucker’s message is what GOP legislators hear the most, they’ll adapt to it.

And, despite his failure to support allies in GOP primaries, Trump has advanced his immigration policies on several fronts. Immigration has declined significantly in the last three years and his revised moratorium, ordered in response to the Flu Manchu, is his best move on the issue in several years. While leaving much to be desired, his rhetoric has pushed the GOP in the right direction. Few Republicans openly claim they want more immigrants or an amnesty.

Even better, four GOP senators and eight congressmen signed letters in May to demand that Trump extend and expand his temporary immigration moratorium.

Of the 12 signatories, the most promising six, though all have their faults, are these.

Since entering the Senate in 2015, the 43-year-old has proven to be one of the best lawmakers on the issue. He sponsored the RAISE Act that would have halved legal immigration, and sternly opposed attempts to legalize illegal aliens. Unlike others who only vote the right way on immigration, Cotton has made it a polemical priority [Sen. Tom Cotton’s Next Mission: Carrying Trump Banner After Trump, by Siobhan Hughes, Wall Street Journal, June 7, 2020]. Sources tell VDARE.com that Cotton is really serious about immigration and realizes it’s a major problem for America.

Cotton has distinguished himself, by the way, by being by one of the few Republicans to stand against Javanka’s disastrous criminal justice reform [Fate of criminal justice reform bill hinges on Cotton amendments, by Marianne Levine, Politico, December 17, 2018]. And Cotton has even urged the deployment of federal troops against the Black Lives Matter riots, provoking the ludicrous Stalin-style purging of New York Times Op-Ed editor James Bennet. (Do it again, Senator!)

Cotton’s main drawback: he’s a neocon Hawk, which could hinder his leading on immigration and building trust among non-interventionist immigration patriots. It’s possible he might tone down his strong support for secure borders if he thinks it will help win legislative support for foreign military adventures.

Cotton also supports the awful Fairness for High-Skilled Immigrants Act, which would scrap country caps on visas and allow Indians to dominate our immigration system.

That has to change.

Missouri Sen. Josh Hawley is another 2024 hopeful who is also strong on immigration…at least on paper. He co-sponsored the RAISE Act and signed the Senate letter demanding an expanded immigration moratorium. In past speeches, he’s warned about the threat mass immigration poses to American workers. He’s great on tech censorship. And, on a possibly related issue, he is far less hawkish on foreign policy than Cotton.

But the 40-year-old Show-Me-Stater barely and rarely actually discusses immigration. He’s tweeted about it only one time since 2019. Meanwhile, he’s tweeted about democracy in Hong Kong at least 30 times.

Hawley spends most of his time on China and industrial policy, and he seems to think hitting the immigration issue harms his image among the smart set of journalists inside the Beltway.

Hawley demonstrates promise as a populist, but he squanders his public platform on meaningless fights and pandering to pundits. He’s much less interesting than he thinks he is.

But he can still correct his course and start fighting in 2020. We have to hope he does.

Cruz, 49, is one of the biggest names in the GOP. He was a top contender for the conservative vote against Trump in the 2016 primaries, he regularly appears on TV, his opinion can make or break legislation, and his tweets reach millions. He’s bigger than Cotton or anyone else on this list.

And fortunately, he mostly uses his power and influence for good on immigration:

Cruz isn’t afraid to challenge the GOP Establishment. He can count on a strong base of support within the grassroots and in conservative media for any battle.

Problem is…he’s too obviously an opportunist who sticks his finger in the wind. He’s been inconsistent on immigration, for instance, in 2015 suggesting he was open to legal status for illegal immigrants [Ted Cruz Won't Rule Out Legalization for 11 Million in U.S. Illegally, by Zeke Miller, Time, November 20, 2015]. He once supported a massive increase in foreign guest workers, before flip-flopping and calling for a serious reduction during the 2016 campaign [Ted Cruz Turns on Legal Immigration, by Benji Sarlin, NBC News, November 13, 2015]. And he didn’t co-sponsor the RAISE Act.

In other words, the question about Cruz: Is he trustworthy?

Gaetz, 38, is a rising GOP star. He’s a Fox News regular with close ties to Trump and he regularly stirs up trouble in Congress. He was a leader against Trump’s impeachment, which solidified his reputation among his peers.

He is also a tough immigration patriot. He co-sponsored the House version of the RAISE Act and regularly discusses the threat of unbridled illegal immigration. Like Trump, he doesn’t apologize for Politically Incorrect statements and he deploys populist bluster effectively. He could be a serious contender in 2024 and will be a leader in the years to come. That gives him the power to advance good legislation on immigration and Big Tech.

Yet he too voted for the Fairness for High-Skilled Immigrants Act.

Sources say that in fact Gaetz isn’t particularly committed to immigration patriotism and instead cynically views the issue as good politics, i.e., red meat for the base. Which is better than nothing…. but not good enough.

When Steve King leaves Congress, Arizona Rep. Paul Gosar, 61, will arguably be the staunchest immigration patriot in the House. He co-sponsored the RAISE Act in the House and was the first congressman to criticize Trump’s initial immigration moratorium because it failed to exclude most guest workers. He helped organize the letter demanding an expansion to the moratorium. He regularly tweets about immigration and even implicitly supported last fall’s Groyper War.

Like Gaetz and Cotton, Gosar is also a stalwart on tech censorship. He recently re-introduced a bill that would force the tech giants to protect political speech on social media.

In fact, Gosar is better on immigration than Gaetz and Cotton. But he lacks their stature. Both drive public debate with strong statements and legislation. They appear on Fox News regularly and are seen as party leaders. Gosar doesn’t have that cachet, which limits his becoming the next great leader of America’s immigration patriots. Solution: more time on Fox, and a better publicity machine.

Lance Gooden, first elected in 2018, is a promising new recruit. He was one of the first lawmakers to criticize Trump’s initial immigration order. He routinely tweets about immigration and the dangers it poses to American workers. No congressman besides Gosar or King comments on immigration more than Gooden. He also supported a tough response to the riots.

Weak local response to these riots has fostered escalation.

And he supports curbing tech censorship.

Gooden, 37, is telegenic, doesn’t come off as a wingnut, and could well become a conservative media mainstay or even a star if his career goes well.

Despite sponsoring the RAISE Act, Perdue is now effectively MIA on immigration. He didn’t sign the Senate letter demanding an expanded moratorium. Instead, he signed letters demanding more guest workers. Perdue is still better than the average Republican, but he can’t be trusted to be a leader. At 70, he’s running for re-election. But he needs to do better.

Brooks has been one of the best voices on immigration. But he is 66 and has had a bout with prostate cancer. His voice is always welcome. But, tragically, he may not be able to provide much further leadership on the immigration issue.

The immigration issue is driven by demographic change, which is itself the product of public policy. However much the Ruling Class strikes down opposition, new opposition will recur, as long as the Historic American Nation has life.