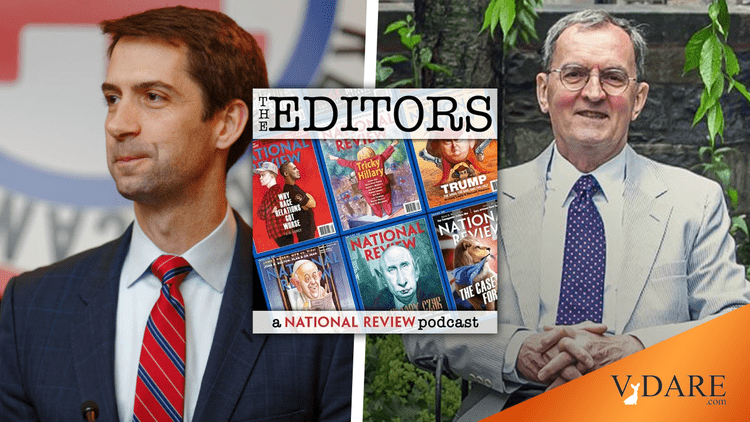 On a recent podcast, NRO editors Rich Lowry, Charles C.W. Cooke and Michael Brendan Dougherty were in high dudgeon about the NYT opinion board's regret about publishing Tom Cotton's piece on using federal force to quell riots and then firing opinion editor James Bennet for letting Cotton's piece run. [The Editors, Episode 225: Worshiping with the Woke Faithful, June 9, 2020] They start on the topic at about 30:30. [MP3]

NRO was very eloquent and persuasive and rightly mocking and derisive of the NYT.  But I kept thinking, didn't you guys do something very similar to John Derbyshire et. al.?

In a way it's less forgivable because NRO was not placating readers outraged by what The Derb wrote, they were placating leftist critics who if they read NRO, it's only to scour its pages looking for heresies against the one true faith of diversity.  At least the NYT's excommunication came from a concern about offending its actual readers.

James Fulford writes: This is not the first time they've been caught doing this. See