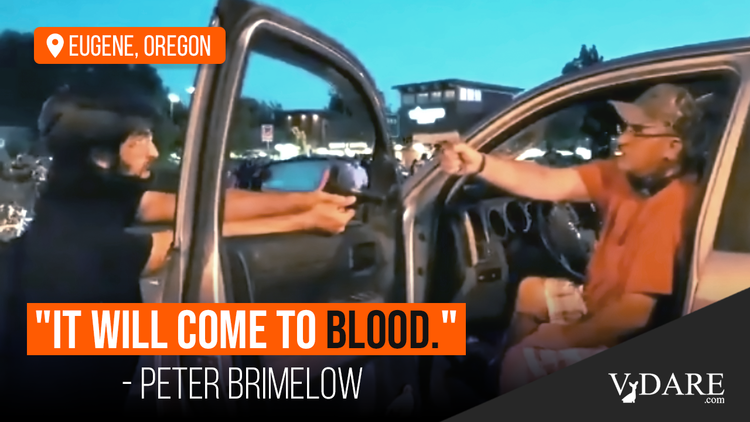 It Has Come To Blood: Riots Are Getting More Dangerous Every Day

Earlier, by Peter Brimelow:  "It Will Come To Blood"—Reflections On The Left's Anti-Trump Inauguration Tantrum

What’s happening across America is difficult for even the most hardened chronicler of what Michelle Malkin dubs #EndStageAmerica to comprehend.

Andy Ngo, one of the most courageous journalists in the country, has long documented the militancy of Antifa/Black Lives Matter terrorists, having once been hospitalized after being attacked by Antifa.

On July 26, 2020, Ngo Tweeted out an incredible video of two armed Americans pointing guns at one another. One was a Black Lives Matter/Antifa supporter who had been blocking traffic in Eugene, Oregon; the other was a white man who simply drove into the wrong blockade at the wrong time.

This was in Eugene, Ore. yesterday at the violent antifa gathering. They blocked off the streets and prevented a driver from using the road. When they surrounded him, he brandished a gun. One of the far-left protesters then brandished a gun back. https://t.co/WY1TgdI738

It’s a chilling, tense 10 seconds, with both men firmly holding their pistols and each pointing the muzzle directly at the other.

Does it capture Peter Brimelow’s inauguration day prophecy that “it will come to blood?”

Here’s a story detailing how this “peaceful rally” turned into a riot, with a lone paragraph dedicated to the video showcasing two people brandishing guns on each other:

Eight were arrested Saturday night in Eugene, one for firing a gun in the crowd during the confrontation with counter protesters and others for vandalism of property downtown early Sunday morning

A protest for the Black Lives Matter movement held in solidarity with Portland protesters Saturday night in Eugene was a night of clashing and close calls, as it almost immediately devolved into aggressive confrontation with counterprotesters and later property destruction downtown by some.

The deliberate property destruction was reminiscent of the first night of protests following the killing of George Floyd on May 29, where several businesses on Sixth Avenue were vandalized.

Eugene police initially stayed away from the groups courthouse [sic] Saturday night during a face-off between pro-Black Lives Matter protesters and counterprotesters who waved American flags and held All Lives Matter signs. Police monitored the situation remotely using drones, Eugene police said, and only made their presence known later that night just before midnight, after protesters had marched throughout downtown spray painting property, breaking windows and lighting trash cans on fire along the way.

Eugene police arrested a total of eight people Saturday night. Seven, including one juvenile, were arrested for rioting. The other person was arrested for unlawful use of a weapon, related to a gun fired during the counter protest confrontation.

But things boiled over when a counterprotester tried to cross through the protester’s line, protesters pushed back and a physical fight ensued between the two groups.

Even before this, one counterprotester had pulled out what appeared to be a Taser and used it on people in the crowd a little before 9 p.m. At one point, a shot was fired into the air, and a University of Oregon Daily Emerald journalist also captured a short video showing a man in a truck and a protester clad in black pointing guns at each other.

Protesters later took to the streets and broke or vandalized the property of several businesses after speakers called on people to dismantle the capitalistic systems in Eugene during a regrouping rally at the courthouse.

“We are here because we believe our community deserves the money from the police department,” one speaker said. “Not a cent should go to the police, to the prison system or to ICE.” They said Black and Indigenous people deserve liberation, and urged the crowd to dismantle the state.

“The state does not care about us — the state cares about property,” they yelled into a megaphone. “Property does not feel. Property destruction is not violent.”

“Property does not feel. Property destruction is not violent.”

It’s already come to blood. People just don’t want to admit how extreme the situation is as we come to the close of July 2020.