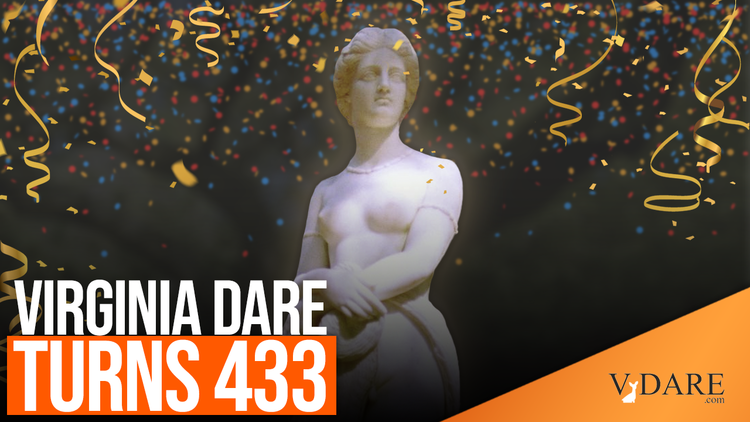 New: WE'RE CELEBRATING ALL WEEK! It's great to hear from so many of you. Thank you for your generosity!

Incredibly, [Virginia Dare’s] 350th birthday was celebrated by a speech from Democratic Party hero President Franklin D. Roosevelt, who also personally helped design the commemorative stamp. But on present form, it may seem that her statue won’t even be in Roanoke’s Elizabethan Gardens in on her 450th birthday in 2037—it will have been torn down by a Communist mob tacitly supported by Democrat politicians (probably related) and replaced with a statue of Malia Obama. VDARE.com’s message: Stay the course. The Lost Colony ended in utter disaster, but Virginia Dare’s memory was sacred when America rose to rule the world.

So far, Virgina Dare’s statue is still standing. But it’s open season on the Historic American Nation. And specifically, VDARE.com.

In the last three years, we were:

But despite each challenge, VDARE.com has fought back, with your help—and succeeded. As we said earlier this spring, we will Never Kneel.

We’ve upturned each of these challenges and created opportunities to overturn legal precedent, strengthen our infrastructure, and secure a meeting space (We Got the Keys to the Castle!). Much to Media Matters’ dismay, we more than doubled our typical year end goal in 2019.

This year, more brand new readers and donors are coming to VDARE.com because they see the feeble attempt by the Mainstream Media to distort the reality that a multicultural America just doesn’t work.

Take for example, this anonymous phone call from a reader in May from one of the liberal cities being destroyed by rioting, “I’m a lifelong Democrat, but I had to call because the violence I saw day-to-day in my own city was not being reflected in the mainstream media.”

VDARE.com has had clear vision all along. For over 20 years, VDARE.com has reliably reported on the unsustainability of current US immigration policy and the “National Question,” which is the viability of the US as a nation-state.

Like that caller, despite the censors’ fiercest attempts, more readers are discovering VDARE.com. And they also realize that no one is coming to save us.

It’s up to us—and you. Donate today to #DaretoCelebrate, and defend, the Historic American Nation.