The bad news: President Trump’s immigration plan was finally introduced in the Senate on Monday, giving patriots who want no Amnesty serious anxiety. But the good news: Senator Ted Cruz seems to have decided to kill it, thus claiming the leadership of the immigration patriot movement.

Trump’s plan, as introduced by Sen. Chuck Grassley (R-IA), would give permanent legalization to 1.8 million illegal immigrants in exchange for border wall funding, the elimination of the Diversity Visa Lottery and the (eventual) end of chain migration. [GOP senators introduce Trump immigration framework, By Jordain Carney, The Hill, February 12, 2018]

To start off with the bad news: Trump’s offer is an obviously bad deal. Not only are a million more illegal aliens given Amnesty under the proposal than the number protected by Obama’s unconstitutional Deferred Action for Childhood Arrivals (DACA) program, the bill would also not end chain migration for another 15 years. Immigration would have to wait another generation to see any significant reduction, and many things can happen between now and when Barron Trump will be old enough to run for office. Additionally, mandatory e-Verify is left out of the legislation, giving immigration patriots even less of a reason to support such a gargantuan Amnesty. 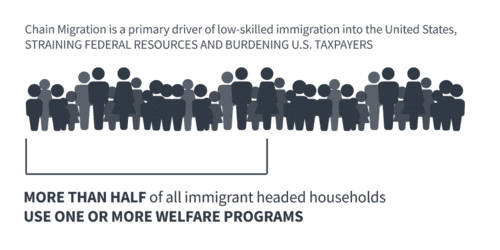 The Senate bill adds Kate's Law, a measure that would further penalize illegal aliens who try to re-enter the country, on top of Trump's framework. But it also grandfathers in all family visa applicants who are currently on the waitlist to get in the country, further reducing its potential to stamp out chain migration.

With such a bad framework, I  expected that the two senators calling for a significant reduction in immigration, Tom Cotton and David Perdue, would be railing against the plan. Instead, they are some of the bill’s biggest supporters, undermining their respective claims of being die-hard immigration patriots. So far, only two Republican senators have expressed any opposition to the bill, and only one member of the Senate voted against putting DACA and immigration up for debate in the upper chamber.

But that brings us to the good things to consider with this bill’s poor chances of success.

One of the senators not thrilled with the immigration proposal is virtue-signaler extraordinaire Jeff Flake (R-AZ). Flake says he will vote against any bill that reduces immigration, letting America know he prioritizes the constant inflow of cheap labor over citizens’ interests. Like all of Flake’s recent actions and statements, he is likely saying this just to receive fawning coverage from the Main Stream Media and it may not reflect how he will vote. Flake is looking to propose his own DACA bill but it’s likely to only be taken seriously by his journalist fan base. Flake’s fellow Arizona senator John McCain has so far been silent on the bill presented before the Senate, but it is probable his thoughts are the same as his colleague.

The other GOP senator expressing opposition to the bill is a much more interesting development. Ted Cruz (R-TX) was the lone vote against moving the DACA measure to debate. Trump’s former Republican primary rival stated his vote was to express his opposition to giving citizenship to illegal aliens.

“Such a policy is inconsistent with the promises that [Trump] and Republicans have made to the voters, and is in fact further to the left of President Obama’s position,” the Texas senator said in a statement. Instead of debating Trump’s proposal, Cruz would prefer the Senate take up Kate’s Law and the El Chapo Act. “Respectively, these bills will provide for mandatory minimum prison sentences for aggravated felons who repeatedly enter the country illegally and require that any assets seized from convicted drug lords go towards building the wall and other border security assets,” he explained in his statement.

Both of Cruz’s proposals would be much more in line with the priorities of immigration patriots than Trump’s bad deal. And Cruz’s statement expressing opposition to the bill indicates he wants to make a spectacle out of the issue. Cruz loves exploiting Senate debates to his own political advantage. What better way to gain attention than to be the lone immigration patriot in the fight?

It appears the Texas senator learned some important lessons from the 2016 election. Trump beat him handily in the Republican primary by running as the America First candidate on immigration, foreign policy and trade. Cruz instead ran as a “TruCon,” thinking the GOP base primarily cared about cutting entitlements and religious liberty laws. With Trump not yet living up to his campaign pledges, Cruz now has an avenue to position himself as a Trumpist holding the president’s feet to the fire.

With Sen. Cotton siding with Trump on the plan, immigration patriots should rejoice that Cruz is filling the void left behind. His knack for publicity will generate sympathetic coverage on Fox News and talk radio and his one vote may be enough to kill the bill’s passage.

That is if it ever comes close to passing—which is still unlikely. Democrats are staking out a hard position, denouncing the president’s plan as “white supremacy” in action. It would be an incredible feat for Democrats to renege on all their rhetoric and agree to Trump’s offer.

Senate Majority Leader Chuck Schumer has done an extraordinary job keeping his party in lockstep on key votes, and there really isn’t enough Red-State Democrats that Republicans can peel off for an immigration deal.

But the Democrats have backed themselves into a corner on DACA and they no longer have the threat of a government shutdown to get the “clean” i.e. untrammeled Amnesty they want.

The best news for immigration patriots:  both sides in this fight may not be actually serious about reaching a deal on DACA at all. Trump appears to be thinking that Democrats rejecting his “generous” offer will make for good campaign fodder in the mid-terms. His Democratic opponents appear to think that agreeing to anything more than a little bit of money for border security will hurt them with Hispanics.

Both sides are dug into their respective trenches and neither side wants to make a truce. Trump has made no indication he will water down his already bad offer even further. If he sticks to it, it’s very unlikely we’ll see any kind of DACA deal.

Which is arguably the best possible outcome—ICE can then start deporting DACAns, after the Supreme Court squashes clears rogue kritarchs out of the way, and the GOP can campaign on immigration patriotism in the fall.

But even if a DACA deal has a chance, there’s at least one senator who sees it as good politics to make sure it doesn’t pass.