GA About To Turn Blue Because Of Immigration. Why Are Gov. Brian Kemp, GOP Elite (Except For Sen. Perdue) Asleep?

Georgia is about turn blue because of immigration. Yet Peach State Republican elites are in denial. The exception: Sen. David Perdue, above, who recently uttered the unutterable in GOP ruling class circles: Demographics will doom the party. One small proof: A GOP poll has Trump leading Joe Biden by just one point in a formerly solid red state [Internal GOP poll points to troubling signs for Georgia Republicans, by Greg Bluestein, The Atlanta Journal Constitution, May 1, 2020]. But the Stupid Party seems wedded to the crazy idea that inside every immigrant is a Republican waiting to get out.

Perdue’s dark prognosis is based on cold, hard facts—those stubborn things that GOP elites ignore. To keep his seat in November, he’ll need “twice the number of votes” he had in 2014, he said. Of course that’s a wild exaggeration, but the direction is right. When Perdue won in 2014 by 8 points, 74 percent of whites voted for him. Georgia Gov. Brian Kemp won the same proportion of whites in 2018, yet only beat Democratic opponent Stacey Abrams by a little more than 1 point.

That’s because the electorate went from 64 percent white to 60 percent in just four years, and the number of white registered voters has dropped from 62 percent in 2016 to 59 today.

Hispanic and Asian immigrants, the only two groups growing in registered voters, drove the shift in such places as Gwinnett County, once a GOP fortress [Rise of young and diverse Georgia voters may influence 2020 elections, by Mark Niesse, Atlanta-Journal Constitution, February 11, 2020].

The county is now just 39 percent white, basically thanks to immigration: 25 percent of its residents are foreign-born. In 1980, when the county was 96 percent white, less than 2 percent were foreign born [Duluth’s ‘Demographic Destiny Train’, by Adina Solomon, Curbed, November 13, 2019].

Mitt Romney won Gwinnett by almost 10 points in 2012. But just four years later, the walls came tumbling down. Hillary Clinton won Gwinnett, as did Stacey Abrams in 2018—and not by a thin margin. She crushed Kemp by 14 points there in the 2018 gubernatorial election.

Unsurprisingly, Democrats eagerly champion the demographic change. Once immigration drives enough whites from the state and the bitter-enders are outnumbered, it’s over for the Party of Trump. 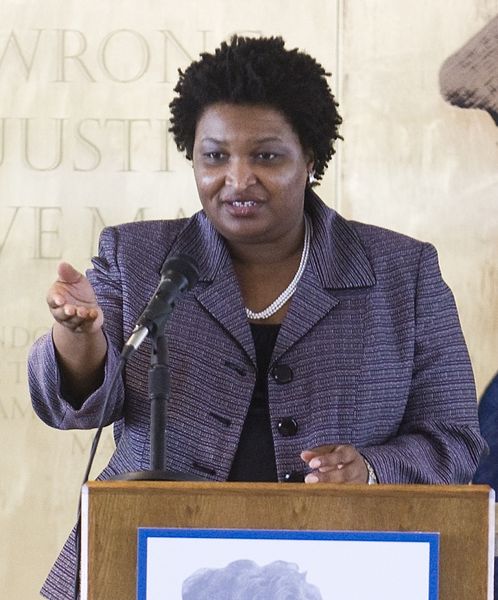 “In every way, that benefits the Democratic Party,” said Scott Hogan, the Democratic Party’s executive director. “Georgia is in play. The state is going to go blue. It’s just a matter of when” [Rise of young and diverse Georgia voters may influence 2020 elections, by Mark Niesse, February 11, 2020].

Abrams, of course, gets it too. “My eye is on 2021,” she recently said. “[W]hen we do redistricting in 2021, if we have not changed the electorate, especially in the South, we will have a majority minority population that is governed by a minority white conservative coalition. And that’s the most dangerous precedent that we can possibly set for the South in the next 20 years” [CAUGHT ON TAPE: Stacey Abrams Plotting To Use Re-Districting to Stop ‘White’ People, by Patrick Howley, National File, April 27, 2020].

Nevertheless, delusional Republicans, and those who know the truth but remain in denial, think immigrants will vote Republican if we can just get the GOP platform into their hands, and maybe a copy or two of The Road to Serfdom and The Federalist Papers.

“People who move here because of job opportunities are natural Republican voters because the Republican Party is the party of growth and opportunity,” state GOP Chairman David Shafer told the Journal Constitution’s Niesse…apparently with a straight face.

Even more incredibly, the chairman of the Gwinnett County GOP, where the truth is staring every white Republican right in the eye, uttered similar sentiments. “Either you don’t know how to change or you don’t want to change,” Gwinnett County GOP Chairman Edward Muldrow told the Washington Post  [In Georgia, Democrats find turning the state blue is easier to predict than pull off, November 18, 2019].

Senator Perdue at least is not living in GOP cloud cuckoo land. But then there’s Governor Kemp, who won in 2018 by promising explicitly to get tough on illegal immigration. The state, after all, has one of the largest illegal-alien populations in the country. In 1996 with 33,000 illegal aliens, Georgia was No. 17 on the list of top 20 states with the most illegal aliens. By 2015, that figure had grown more than 10 times, the Department of Homeland Security reported, to more than 390,000, a population that lifted Georgia to No. 7 on the list. Now, it’s ahead of Arizona [Population Estimates: Illegal Alien Population Residing in the United States: January 2015, DHS.gov, December 2018].

Kemp’s “So Conservative” campaign ad actually featured his racking a shotgun and starting a chainsaw, and then, for immigration patriots, this line:

I gotta big truck just in case I need to round up criminal illegals and take ’em home myself. Yep, I just said that.

Kemp released a detailed “track-and-deport” plan to help police collar illegals. But beyond that, he’s done nothing. He has not mandated E-Verify mandatory, cracked down on sanctuary cities, or backed a bill to require prison reports on illegals. He even disbanded the Immigration Enforcement Review Board designed to ensure cops take illegal immigration seriously [Georgia Shuts Down Immigration 'Kangaroo Court,' by Greg Bluestein and Jeremy Redmon, Atlanta Journal-Constitution, May 15, 2019].

In other words, yep, he said that, but we’re still waiting for Kemp to round up criminal illegals in his Ford-350 and drop them back home.

Why Kemp spoke about immigration at such a venue is a mystery. Loeffler is married to an amnesty advocate and, predictably, has done nothing about immigration since she took office. Happily, she seems to have no chance against Rep. Doug Collins, who is an immigration patriot One of only 57 Republicans to vote against the horrible “Fairness for High-Skilled Immigrants Act,” Collins boasts an A rating from NumbersUSA. The latest poll shows that Georgia Republicans overwhelmingly prefer Collins by 44 points [Internal GOP poll points to troubling signs for Georgia Republicans, by Greg Bluestein, Atlanta-Journal Constitution, May 1, 2020]. Because this is a Special Election, all candidates will face off in November, with a run-off if no one reaches 50%.

Meanwhile, Perdue, who only has a career B+ from NumbersUSA, at least cosponsored the RAISE Act.

But all three have failed American workers in the face of the Chinese Virus pandemic and ensuing lockdown that has resulted in more than 30 million unemployment claims. About 1.3 million of those 30 million claims, not insignificantly, are from Georgians [Georgia unemployment claims reach 1.3M since mid-March, by Jessica Saunders, Atlanta Business Chronicle, May 1, 2020]. Nevertheless, all three want more “guest workers.” None supported President Trump’s (very weak) immigration moratorium, much less demanded an expansion.

With polls showing that large majorities of Americans want immigration stopped, including 83 percent of Republicans, Kemp, Perdue, and Collins, had better figure out that voters won’t turn out if they don’t act now.

If, as Perdue says, the numbers mean that Georgia is about to go Blue, the three can’t stop that turn without a herculean effort.

Kemp must crack down on illegals, not least with E-Verify and other measures he promised. Now is not the time to permit cheap, illegal-alien workers to steal jobs from native Georgians.

Perdue and Collins must back an immigration moratorium and demand that Trump expand it to include guest workers, which could be a winning issue with Republicans and Democrats.

The demographics in Georgia presage a grim future for the GOP. But in a state with more than 1 million unemployment claims in a month, if Republicans attack legal and illegal immigration and the jobs those aliens take from Americans, they can turn it around.

The Georgia GOP has no choice. Embrace immigration patriotism or die.