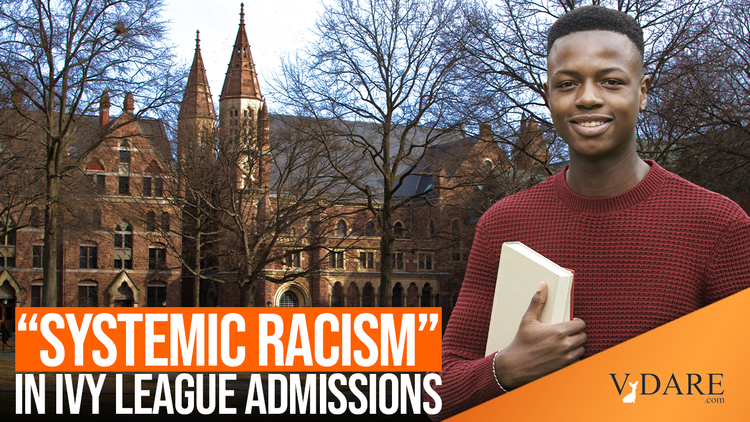 Earlier: DOJ Tells Yale to Stop Discriminating Against Asians and Whites, and from 2017: Trump/Sessions Take On ANTI-WHITE Discrimination In Colleges—That's Different!

If the definition of racism is deliberate discrimination based on race, color or national origin, Yale University appears to be a textbook case of "systemic racism."

And, so, the Department of Justice contends.

"Yale discriminates based on race... in its undergraduate admissions process and race is the determinative factor in hundreds of admissions decisions each year.

"Asian Americans and whites have only one-tenth to one-fourth of the likelihood of admission as African American applicants with comparable academic credentials...

"Yale uses race at multiple steps of its admissions process resulting in a multiplied effect of race on an applicant's likelihood of admission.

Yale defends this admissions policy by claiming it considers the "whole person"—leadership, a likelihood students "will contribute to the Yale Community and the world," and, says Yale President Peter Salovey [Email him] "a student body whose diversity is a mark of its excellence."

Yet, somehow, when all these factors are considered, the higher-scoring Asian and white students invariably come up short, because the racial composition of Yale's incoming classes remains roughly the same every year.

The Justice Department refused to wave its big stick—a threat to cut off tax dollars that go yearly to Yale. Incidentally, Yale sits on an endowment of some $30 billion—second only to Harvard's.

A court case alleging that Harvard emulates Yale, or vice versa, and admits Black and brown students whose test scores would instantly disqualify white and Asian students is headed for the Supreme Court.

At the heart of this dispute over diversity are basic questions, the resolution of which will affect the long-term unity of the American nation.

And, if so, for how long? Forever?

Is it praiseworthy to advance Hispanic applicants over Asian applicants with far higher test scores and academic achievements?

Why? What did these Chinese, Korean, Filipino and Vietnamese high school seniors do to deserve discrimination in the country to which their parents came where, supposedly, "All men are created equal"?

President Lyndon Johnson first formally introduced this notion of benevolent racial discrimination. Addressing D.C.'s Howard University in 1965, LBJ said in a speech written by Richard Goodwin, "We seek... not just equality as a right and a theory but equality as a fact and equality as a result."

But what if equality of opportunity, an equal chance at the starting line, fails to produce equality of results?

What if Black Americans dominate America's most richly rewarded sports such as the NBA and NFL, while Asians and whites excel in academic pursuits and on admissions exams at Yale and Harvard?

Why is it right to discriminate against working-class white kids from Middle America in favor of urban and middle-class Black kids in admissions to prestige colleges?

If so, what does social justice mean? Who defines it?

In California, the state legislature has put on the ballot a measure to overturn the ban on all racial and ethnic discrimination that was voted into California's Constitution in Proposition 209 in 1996.

"The state shall not discriminate against, or grant preferential treatment to, any individual or group on the basis of race, sex, color, ethnicity, or national origin in the operation of public employment, public education, or public contracting."

Civil rights activist Ward Connerly, who is fighting the repeal of Prop 209, argues that while street mobs may be tearing down statues, West Coast liberals are tearing down the principle of equality.

It is the character of the republic that is at issue here.

If Asian Americans, outnumbered 5 to 1 by Black and Hispanic Americans, can be indefinitely discriminated against, this would appear to be the very definition of "un-American."

And if white Americans, the shrinking majority of the nation and a minority in our most populous states, can indefinitely be discriminated against in favor of people of color, they will eventually embrace the tribal politics of race and identity that would risk the breakup of the union, as is happening in Europe and around the world.

The taproot of progressive racism is LBJ's Executive Order 11246. This altered the meaning of "affirmative action" from guaranteeing the equality of opportunity to bringing about an equality of "results."

President Donald Trump, before or after Nov. 3, should convene with Ward Connerly and ask him to redefine "affirmative action" to mean exactly what its original author, JFK, intended it to mean.

As for Yale and other Ivy League universities, it is an indictment of conservatives who have held executive power often in the past 50 years that they have not chopped federal funding for these bastions of progressive racism.