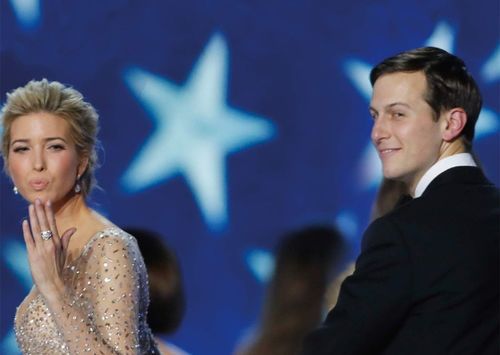 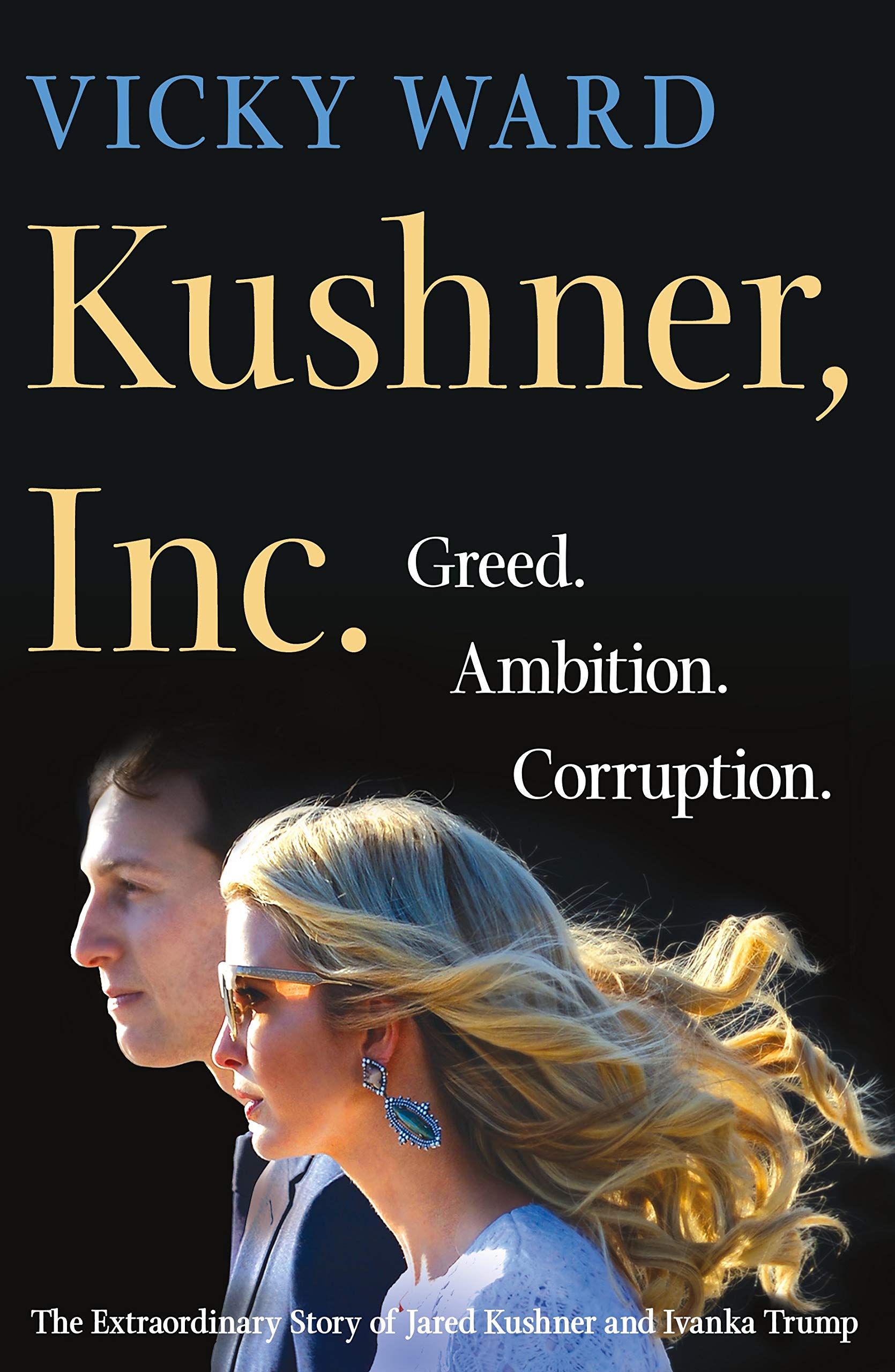 For example, did you know our president got breast implants in high school (Ivanka claimed she was just "curvy"), bought his way into Harvard (Jared is even dumber than you thought), and together have no books in their New York apartment? (Some dispute that there are no books, citing "a few art books" or "decorator-curated books.")

Ward's recently released blockbuster, Kushner, Inc.: Greed. Ambition. Corruption. The Extraordinary Story of Jared Kushner and Ivanka Trump, tells you all this and more about our actual commander in chief: President Javanka.

On the bright side, Jared has stopped rolling his eyes so much about his father-in-law now that Trump is president, er, "president." Until Trump's nomination was a virtual lock, Jared was back in New York pretending not to be related to him.

Only after Trump had racked up a slew of primary wins did a lightbulb go on in Jared's head: Hey! This presidential campaign could be great for business! According to a close associate, Jared viewed the campaign as a terrific "networking opportunity."

In short order, Jared moved himself in, and moved campaign manager Corey Lewandowski out.

Trump's loyal campaign manager had been with him through the "Mexican rapists" speech, Macy's dumping Trump's ties, the "McCain isn't a war hero" controversy, the Muslim ban, the "hand size" embarrassment, and on and on and on. But when all was said and done and Trump was still cruising to victory, Jared and Ivanka walked in and delivered an ultimatum to Trump: "It's Corey or us."

Jared would later shyly cop to being "[The Man Who] Won Trump the White House," as a Forbes magazine cover story put it.

And who understood the beating heart of the Trump voter like Jared and Ivanka? With Javanka in charge, the campaign schedule was soon bristling with such items as "women's empowerment week," "education week" and "entrepreneur week."

In no time, Trump was 16 points down and sinking fast. Steve Bannon was brought in, whereupon he promptly threw out all the Working Women's Intersectional Global Warming weeks and got back to Trump's issues.

As the SAT board had discovered, math wasn't Jared's strong suit. 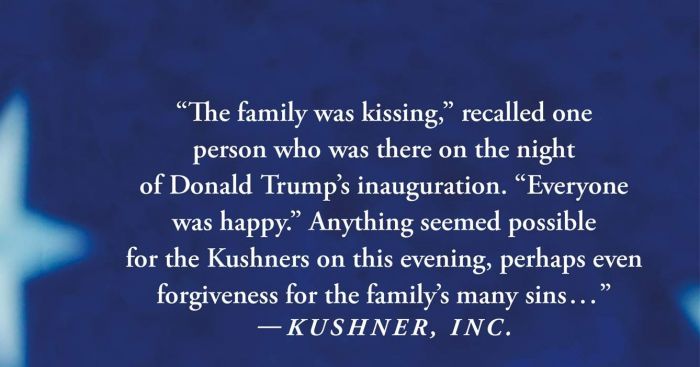 Although it has been well reported that Jared's Harvard admission was purchased for him by his father, Ward produces a shocking new detail. Of the five tracks at Jared's high school, he wasn't at the bottom of track one, perhaps suitable for a lesser Ivy League with solid SAT scores. He wasn't even in track two. Jared was in track three.

But now he has co-opted the Make America Great Again movement for his own personal advancement. I guess that makes him smarter than Trump.

Apart from staging photo-ops, including her "princess moment" at the inaugural ball (her words), Ivanka's first order of business upon winning the presidency was assigning White House office space. Her map showed a big office for her, a big office for Jared—and also a nice corner office, which was designated "Trump family office."

Transition officials, Ward reports, "were surprised that the first lady did not appear to have an office. So, too, was Melania Trump, who quickly put an end to Ivanka's scheming."

Jared's BFF, Saudi Crown Prince Mohammed bin Salman (MBS), and the crown prince of Abu Dhabi, Muhammad bin Zayed (MBZ), refer to Jared as "the clown prince." Bone-cutter MBS assured those around him that he had Jared "in my pocket."

MBS and MBZ derided Jared's Middle East peace plan as infantile, while using him to achieve their objective: war with Qatar. According to an American businessman's leaked emails, their attitude was, "Nobody would even waste a cup of coffee on him if it wasn't for who he is married to."

As one former top White House official explained: "Jared never understands the details of anything. He's just impressed by names."

Following meetings at the White House and also with the Kushners over their 666 Fifth Avenue property, former Qatari Prime Minister Sheikh Hamad bin Jassim reported back to the emir that "the people atop the new administration were heavily motivated by personal financial interest." 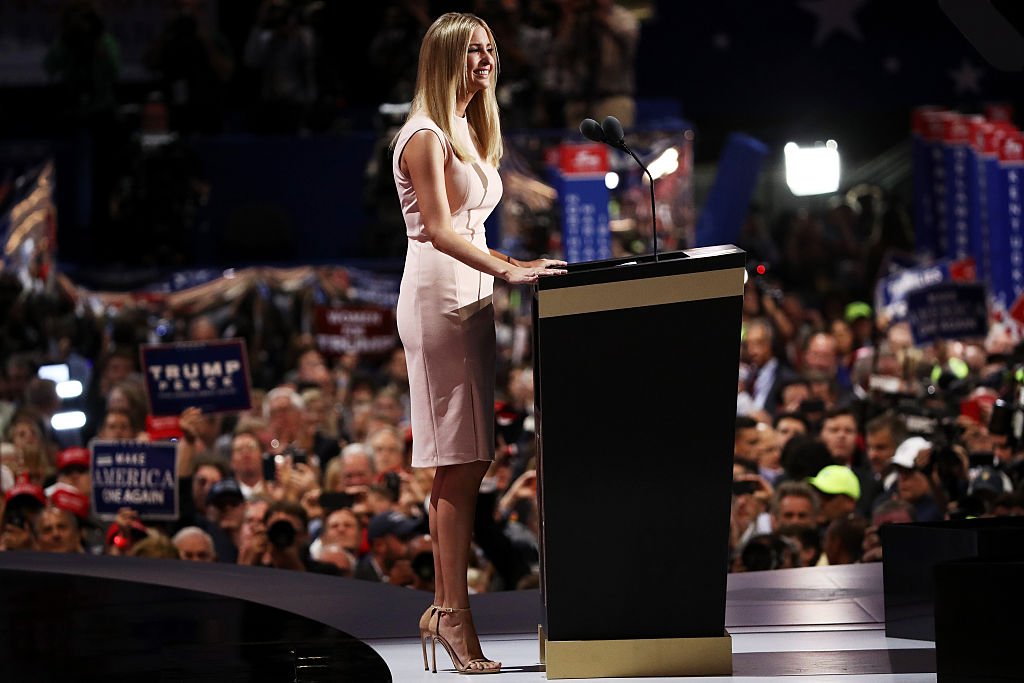 After Ivanka's speech introducing her father at the Republican National Convention—rivaled only by Billy Carter's introduction of his brother, Jimmy!—she tweeted from her personal account: "Shop Ivanka's look from her #RNC speech."

After the Trump family was interviewed on CBS's "60 Minutes," Ivanka's company emailed out a "style alert" advertising the $10,800 diamond bracelet she'd worn on the show—"available from Ivanka Trump Fine Jewelry."

Ivanka has managed to win a slew of trademarks in China since her father became the Figurehead President, with several approvals being fast-tracked at about the same time Trump was hosting Chinese President Xi Jinping at Mar-a-Lago.

Instead of "Make America Great Again," the motto of the Trump presidency is, as one of Trump's legal spokesmen put it: "The advance team for Jared and Ivanka."

This is not what anyone voted for.