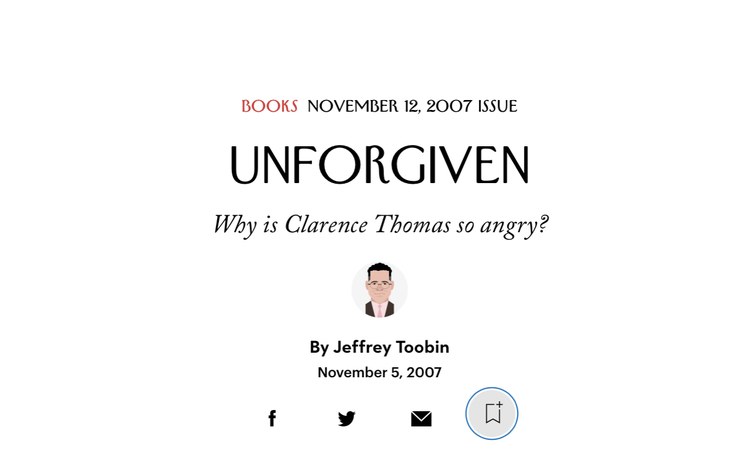 This is from law professor Ann Althouse:

Althouse: "Unforgiven: Why is Clarence Thomas so angry?"

That's the title of this Jeffrey Toobin piece in The New Yorker. I don't think that's a very accurate title and suspect his editor was hot to spread the Thomas-is-angry-meme. What concerns Toobin is Thomas's attachment to conservative politics.

She goes on to quote Toobin's concluding paragraph, (as she notes, not "about anger at all") which says that "There is less to celebrate in the way that Thomas has used the opportunity to speak power to truth."

This is switch on Anita Hill's claim to have been "Speaking Truth To Power"—actually, of course, she was engaging in a series of malicious lies—on behalf of the majority party in the Senate at the time, which hardly seems to fit the Mahatma Gandhi/Rosa Parks image conjured up by those words.

And what Toobin calls speaking "power to truth" is no more than strict constitutionalism, and a belief that criminals, if guilty, should be punished.

But what Toobin is objecting to is who Thomas is believed to be mad at: Democratic Senators, and liberal journalists like Toobin. (And Anita Hill, of course.)

After what he went through in his confirmation hearings, and in the press since, I don't blame Thomas for being mad at any of those people, but Toobin seems to think it's wrong.

But...if Thomas were angry at America, and at white people in general, and used his seat on the Supreme Court to set criminals free and enshrine racial preferences as a constitutional principle?I  don't think Toobin would object to that at all.